“Nanny!” he calls, running from the parking lot.  Jackson arrives with his dad at the recreation area where, his mom, Kristen, and I have been decorating a picnic table for his seventh birthday party.  As he approaches, I crouch to receive his bear hug. His close-cropped hair, the color of a wheat field, bristles against my cheek.  He pulls away to greet the other children gathered around him.

I marvel at the depth of his affection for me.  My own grandmother lived 2000 miles away. We visited only a handful of times, so she remained a stranger to me. I worried, when Jackson was born, that I wouldn’t know how to make him love me.  I soon learned that it was easier than I thought.

The party progresses, and at last it’s time for the birthday boy to open his presents. His eyes grow large as saucers when he peels the colorful paper from a tall tube-shaped box, one of the gifts from his grandpa and me. 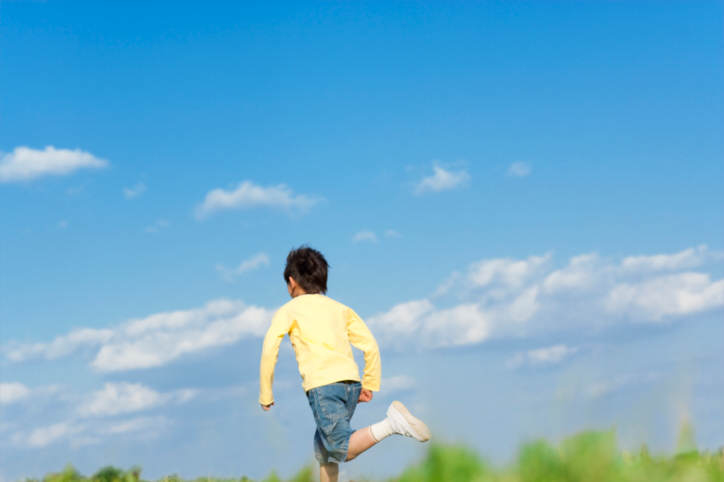 “I finally got my lava lamp!” His smile widens as he lifts his gift high above his head.

I wonder what could so excite a seven-year-old rough and tumble about the iconic symbol of the late ‘60s.

“I suspect he thinks it contains real lava,” his mother tells me later. His innocence touches my heart.

That evening, we dine at Rubio’s Grill, Jackson’s favorite.  We find a table on the patio to enjoy our tacos in the warm autumn air. He begs a penny from me to throw into the nearby fountain. I give him five.

Kristen tells me that when he was about three years old, she and a girlfriend took their sons to a park with a fountain.  Neither mom kept more than an casual eye on the boys. When it was time to go, they discovered that the little scavengers had fished out all the coins from the bottom of the shallow pool.

“It was humiliating,” Kristen says. “We had to walk the boys back and stand there while they tossed them all in.”

Jackson returns to ask for one more penny.  I notice that his fist still clutches a few of the ones I gave him the first time he asked. “Are you keeping those?”  He smiles, lowers his eyes and nods.  I dig into my wallet for one more penny. He runs back to the fountain.

That evening, before bed his mom suggests that we watch a movie so she can lie down. Jackson picks out “The Lorax,” then joins me on the couch. We stretch out and try to get comfortable.  I blink back a tear, aware that he’s now almost too big to snuggle with me this way.  We settle into a mutually agreeable position. He proceeds to narrate the scenes he has watched so many times.

“Nanny, wake up.” I flinch, startled by his command. “It’s not over yet.” This scenario is repeated throughout the final scenes of the film.

Next morning, I remember that one gift I brought is best enjoyed in low light.  “Shoot,” I say. “I forgot to get the flashlight and the shadow book out last night.”

I load the flashlight with batteries and accompany my pajama-clad grandson into his room.  We lie side by side on his bed,  illuminating comets and galaxies onto the ceiling. Knowing that these simple activities will not entertain him for many more birthdays, I slip my arm around his shoulder and pull him close to me.

After breakfast, I brew a second cup of tea to postpone the inevitable goodbye and the long drive home.

“Tell me when you’re leaving, ‘cause I want to give you a hug,” he says, without looking up from the pile of LEGO in front of him on the floor.

Kristen nudges him with her bare foot. “Come on, Jackson, let’s help Nanny load her car.”

He unfolds his legs to stand. Crouching to receive his bear hug, I hold my breath, trying to freeze time.  Tears sting my eyes when he releases his grip and turns to pick up my cosmetic bag.  We head outside into the harsh October sunlight to fill the trunk with my things. Kristen and I share an embrace. I climb into the driver’s seat, trying to think of a way to prolong this moment. Jackson reaches in and gives me one more hug.

“I love you,” I say, feeling his hair brush my cheek once more. “I love you, too,” he replies, then steps back to let me close the door.

Traveling down Highway 50, I recount each precious moment of our too short visit. I know it will be weeks before I see him again, maybe not before Thanksgiving. Seven years have passed as quick as a comet across the sky.  My heart aches with the thought that I am losing my only grandchild to time.  For some miles, I contemplate abandoning my life and moving to Folsom, so I never have to leave again.

Read more from Camille DeFer Thompson on her blog

Thanks for sharing this loving tribute to grandkids and grandmother-hood. Your grandson is lucky to have you in his life. JMHO.