Writer Kathy Gottberg talks about Father’s Day and the five life lessons from dad her own father taught her. Read more from Kathy Gottberg on her blog, Smart Living 365.

It’s been over four years since my father made his transition*.   I still think of him regularly and miss him more than I actually expected.  With Father’s Day (in the US) being just around the corner, he’s been on my mind more than usual.

But who says you can only celebrate Father’s Day when your Dad is present and available?   Besides, if the true sentiment behind Father’s Day is to honor fathers and paternal bonds, maybe the holiday is a good excuse for all of us to acknowledge the care and guidance our father provided—and to celebrate the fathers among us who take the time to nurture and encourage children in many different ways.

The History of Father’s Day

Father’s Day is celebrated on the third Sunday of June and first became a holiday in the US back in the early part of the 1900’s. Interestingly enough, it was not made an official US national holiday until 1972, because of fears it would then become too commercial.  Unfortunately, that fear has certainly been realized in our consumer culture.  But the idea of the holiday as a celebration of appreciation is valid and is likewise celebrated by dozens of other countries around the world on various dates.

While I’m sure that we all have a definition of what we think makes a good father—the perspective that I’ve always appreciated most in regards to the roles of both father and mother comes from the poet Kahlil Gibran in his bookThe Prophet where he said,”

They are the sons and daughters of Life’s longing for itself.

They come through you but not from you,

and though they are with you yet they belong not to you.

You may give them your love but not your thoughts,

for they have their own thoughts.

You may house their bodies but not their souls,

for their souls dwell in the house of tomorrow which you cannot visit, not even in your dreams.

For life goes not backward nor tarries with yesterday.

You are the bows from which your children as living arrows are sent forth.

The archer sees the mark upon the path of the infinite

and He bends you with His might that His arrows may go swift and far.

Let your bending in the archer’s hand be for gladness;

For even as He loves the arrow that flies

so He loves also the bow that is stable.

If we consider fatherhood a stable “bow” that sends forth those in his care to become their own person, then each of us is likely filled with lessons passed on to us from the person we call father.

With that in mind, I came up with five life lessons from Dad. 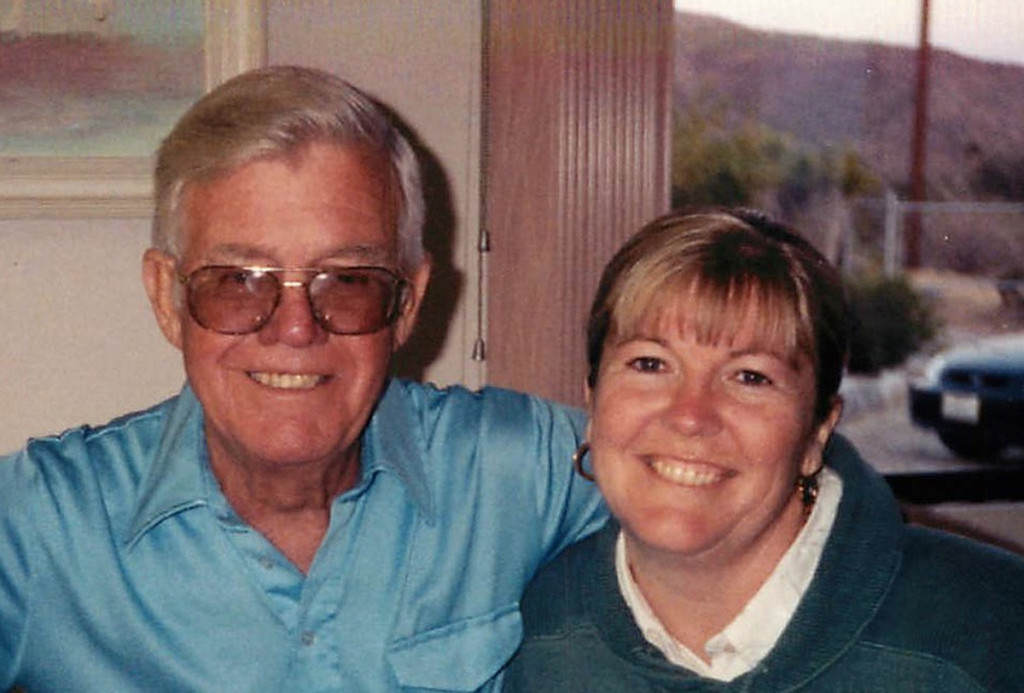 My Dad and me.

#1 Friends and/or family are good for your health and happiness.

Dad had lots of friends—and in spite of not taking that great of care of himself (never saw a doctor, hardly ever ate anything green, and probably drank too much)—he lived longer than even he expected.  In fact, studies show that people who have a strong social network improve their odds of survival by 50%.   In some ways, not having a close circle of relationships is worse than either smoking, being an alcoholic, not exercising or being obese.  Dad liked to have fun and enjoyed being with people, and that example is a good reminder for us all to take the time to nurture relationships for as long as we live.

My Dad was a wonderful example of how a person can be careful about their money without being a tightwad.  A man with simple tastes, he was never extravagant, but he would easily share what he had with those around him.  Precisely because his tastes were uncomplicated, he often said that he couldn’t understand why others who had three times his income didn’t seem to live as well as he did.   Thanks to my father for the understanding that living simply isn’t a sacrifice—it’s a choice.

#3 Being un-employable is a  great way to live.

Thom and I have been self-employed so long that we call ourselves “unemployable.”  I owe a huge debt to both my parents for the model and the encouragement they offered for the viability of this kind of life.  While it isn’t always easy to be self-employed, Dad worked hard and provided well for his family. Best of all, my father showed that even without the benefit of a high school education, a person can create, succeed and have a happy life as long as he/she was willing to work for their dream.

My father and mother were married for over 55 years and he nursed her until her transition* in 2007. Once Mom passed, Dad was devastated for over six months.  Then a few months later, he had dinner with an old family friend (a widow he had known for years) and instantly fell in love.  In fact, he was so smitten with Carolyn that it was almost embarrassing to watch!  Dad and Carolyn moved in together and stayed that way until he passed on a couple of years later.  Dad and Carolyn proved to me that even when you think that life has nothing more to give—love can surprise you.  Even better, love can delight you beyond you’re wildest expectations if you just give it a chance.

#5 We all have more control over our life, and our death, than we realize.

Because my father nursed my mother for several years and saw how hard that steady decline was on her and everyone around, my father vowed to do it differently.  He even asked for our support and suggestions, but none of us were interested in the conversation.   I think that’s when he realized that if he wanted to do it differently, he was going to have to make some decisions—and that’s exactly what he did.

Of course, knowing that he had a terminal illness worked into the plan because once his decline started he willingly entered hospice and got his affairs in order.  He also made a strong effort to stay away from pain or mind-altering drugs. Within a couple of weeks of being fairly mobile and active, he was gone.  I have no doubt in my mind it was exactly as he intended—and that is a lesson I expect to remember up until it is time for me to decide for myself.

Of course, I also learned several things not to do from my father. (Didn’t we all?)  But even then he was teaching me the best he knew how.  I think there comes a time in each person’s life when we stop hoping or wishing our parents were something other than they are (or in my case “were”)—and start appreciating them for doing the very best they knew how at the time.  More than anything, I am reminded of how very short and precious our time is with those we love—and urge us all to make the most of every single day we have left.

*Transition is an alternative word to describe the passing of life here on earth.  It is a reminder that death is likely not an end to anything—but merely a “transition” from one plane of existence to another.

The piece where the prophet speaks " on children" has always been one of my favorites. It is hauntingly profound...."your children are not your children, they are Life's longing for itself." Gosh, it gives me chills. This was a lovely post.

Thanks Lisa. I've always imagined that one of the most challenging things about being a parent was that strong attachment that happens, and then must be loosened, as the child becomes an adult. Gibran's perspective explains the beauty of it in a way that I've never seen written elsewhere. ~Kathy

Thank you Kathy - what a beautiful post! Sounds like your dad was a wonderful man. Thank you for sharing his advice with all of us!

Thanks Lana...you are very welcome. I hope that each of us takes the time to remember the important men in our lives and everything they do to help us grow. ~Kathy

Thanks Kim! Yes...it was one of my big intentions that we all take a little time and realize the things we are learning from those around us. I certainly loved an appreciated my dad when he was around, but I never fully absorbed what he taught me until he was gone. I'm hoping he knows how much they all mean to me now. ~Kathy