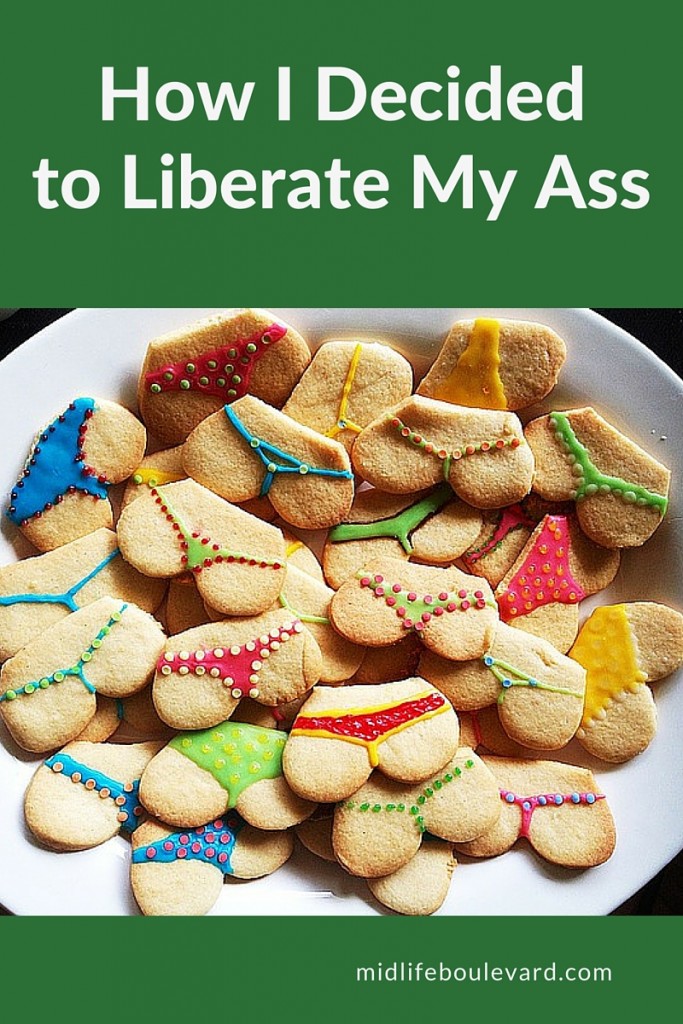 Colette’s website is where she shares her stories, great writing resources and information on her coaching classes. This content was originally featured there.

Lately, I’ve been feeling rather smug about how well I’m dealing with the aging process. My encroaching wrinkles give me character. I embrace my faulty memory. And my crotchety, do-it-my-way-or-not-at-all attitude has a certain charm. Aging and I have become buddies.

Then, recently, I decided to wear a thong.

I’m not new to thongs. I’ve worn them since junior high. For years, they were essential to my wardrobe, especially during my lawyering days when I was in my twenties and early thirties. I was a woman competing in an aggressive, masculine world. My outfits–form-fitting Armani suits and sheath dresses–had to be feminine yet professional. They had to be perfect. I had to be perfect.

Which meant no panty lines. So what if thongs made me feel like I had dental floss up my ass? I was tough. I worked out almost two hours a day, six days a week, to achieve a thong-worthy, streamlined posterior.

In my early thirties, I quit law to become a writer. I knew I couldn’t keep buying clothes like I used to. So I stopped budgeting for the Barney’s Warehouse sale and started scouring bargain basements. My daily uniform changed from Armani everything to no-brand T-shirts and jeans that didn’t show panty lines and therefore didn’t require thongs.

My focus shifted along with my budget. Crafting perfect sentences and storylines became (somewhat) more important than achieving the perfect ass. I still wore thongs when I dressed up for dates or on holidays, but mostly I opted for the thong-less comfort of jeans. But I still had my pride. I still worked out like a fiend. I was still thong-worthy.

In my mid-thirties, I met my husband and settled into myself with this man who loved me even when I drove him nuts. Perfection didn’t matter as much. I worked out less, wore even fewer thongs. Then came my son, who filled up the recesses of my life in the most insistent, glorious way. Perfection flung itself out the window as I figured out how to juggle writing, raising a kid, cultivating a marriage. Thongs became a distant, itchy memory.

Until recently, when I decided to wear a slinky maxidress out to dinner.

We were going to a casual Mexican restaurant in Culver City that makes my eleven-year-old son’s favorite crispy tacos. And suddenly I felt like kicking aging in the teeth. I wanted my flabbier-than-I-ever-imagined ass to give the illusion of a muscular curve. I wanted my thong.

It had been a long few months, you see, of very little sleep or exercise and lots of teaching and editing fitted around my son’s schedule. Months of not doing enough writing of my own and of therefore feeling bitchy and exhausted and defeated. Of feeling as if I were failing at everything. I needed to bolster my pride. I needed my ass to look good.

So I dug a thong from the recesses of my underwear drawer and slid it on under my dress. It cut into the meat of my behind and left faint lines, but I could still pull it off.

“You look nice,” my husband remarked as we got into the car.

My son glanced up from his comic book. “Why’re you so dressed up?”

To remember the younger me, I could have said.

“It never hurts to look good,” I said instead and readjusted my thong, which was already riding up.

At dinner we chatted and laughed and drew superheroes on the paper place mats. And I spent the entire time picking that goddamned thong out of my ass crack.

Which made me realize: I no longer want to be thong-worthy. It’s not worth the discomfort. I’ve got a family I love, a challenging, absorbing career. Even on days when it’s hard to find time to brush my hair, I am fully engaged by the life I’ve created. The itch for perfection that made me think thongs were a necessity? It’s gone.

I’m no longer striving for the perfect body or even the perfect sentence. Instead, I’m striving to live with authenticity and grace. So from now on, my ass will be sporting panty lines. No more thongs. No way.

Colette Sartor lives and writes in Los Angeles. Her fiction and essays have appeared in Kenyon Review Online, The Chicago Tribune, Slice Magazine, Carve, Hello Giggles, The Good Men Project, Club Mid at Scary Mommy, Role Reboot, and elsewhere. Find her at colettesartor.com and follow her on Twitter at @colettesartor.

That's my favorite way to go these days!

Love this, Colette! Couldn't have said it better. And I feel the same way about thongs - comfort (not just in terms of your crack, ha, but just being comfortable in your own skin, your age, your life stage, all of it...) just takes you so much further.

Thanks, Anita!! That's been the best part about aging, and parenting, to be honest. I'm too old, too tired, and too concerned about more important stuff like my kid's well being to obsess the way I used to about myself. It's kind of nice.

That's my favorite way to go these days!!

This is great, Colette. I must admit that, from time to tiime, I do wear a thong. Sometimes it rides up my ass crack like a jockey on an Arabian horse. But mostly, it's me and my cover-all drawers. Thanks for the insight.

Oh, my god. I love the jockey on an Arabian horse. That's exactly what it feels like! And I'll admit, I've also lapsed a couple of times since I wrote this piece. Mostly, though, I've stayed true. That ride is not a pleasant one. :)

Thank you for reading!!

How Old Do I Look?

There are days that I stop and wonder ... how old do I look? I wonder if my outside image projects...