Jenny Kanevsky writes about a universal experience – the end of a friendship. Read more from Jenny on her blog.

How many books are written about break-ups? What about songs or movies? The end of a love affair is big business and is universal. But what about the end of a friendship? How do we break-up with a friend? Sometimes, the evolution of a friendship is organic and easy. We take the hint, phone calls go unanswered and we realize we’re not close anymore and it doesn’t hurt. We let it be. We move on. Lives change, things are fluid. You used to work together and now you don’t. Your kids aren’t in the same class anymore. It’s not a huge issue, it just is. This happens a lot. These changes, they are often not break-ups at all. You might cross paths with this friend again, be it years or even decades later, and pick up right where you left off. Circumstances have brought you together again and it’s pleasant, or even wonderful. 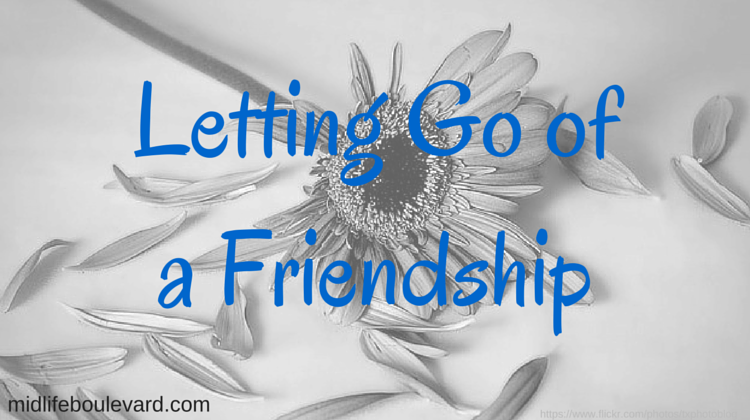 Other times, there is an awkward shift. Whether gradual or sudden, expectations no longer match, values change, someone does something or, quite simply, one person wants more out of the friendship than the other. Feelings get hurt. I’ve been on both ends of this. As I write this, I am thinking about a woman, a friend who I can no longer call a friend. We broke up, really she broke up with me simply by being unresponsive. I used to tell myself it was her nature (and, it is, she’s scattered and can be unreliable, even when we were equally invested friends). But I know definitively, that we are no longer constants in each other’s lives because she does not want it. Being connected to me isn’t important anymore and that makes me sad. And, it makes me question just how close we were. What did I mean to her? I think we were close. And, finally, is this line of questioning akin to self-inflicted paper cuts followed by a shaker of salt?

Most likely, and I am proud to be able to be both objective and adult enough to write these words, we have drifted apart. We no longer live in the same state. We met at work many years ago and clicked easily. We trained together for my first triathlon—she pursued me as friend and training partner; the thought of doing a triathlon had never entered my mind. I was terrified and she quickly became a close friend. To say our training runs were like therapy sessions does not do them justice. Those soul baring early morning runs were the highlight of my day. My workout partner had always been music. Instead, I had a new friend and we soaked each other in with reciprocal love and respect. It sounds romantic; it was nothing of the sort. I don’t think we give friendships enough credit for just how intimate and deep they can be. I was real with this friend and she with me.

So, perhaps that is why I still, over a decade later, feel a twinge as I write this and see her name come up on my “Chat” drop down box on Facebook. There she is, right now, just a keystroke away. But in fact she’s much farther still. And, through the fishbowl that is social networking, I see she is still in touch with other people from that time in our lives. And I am not, at least not in the same way. But in the writing of this post, I have realized, I don’t want to be. I can let her go.

I made attempts at re-connection. She did eventually respond years ago, but her response felt defensive, like an excuse and not a true reaching out. It was, again, another explanation of why so much time had passed between us. “Doc, it hurts when I bang my head against the wall.” I think I get it now. It may be me and it may not but it’s time to back away from the wall. I have set her free. I am going to remember with fondness and love the years of friendship we shared, and let go of the disappointment I felt because of what is not now.

Remember Helen Seinfeld’s refrain on “Seinfeld?” Jerry tells his mother, “Not everyone likes me.” “Oh, that’s ridiculous,” she says “how could anyone not like you?” It is possible for someone to not like me, or to have liked or loved me once but to have moved on. And for it to not be about me. There’s no bad blood, no need for closure or emotional rehashing. It just is. Things change, people change. And I will always have the memory of early morning runs, ours a beautiful wooded path that wove past a creek, horses, a serene duck pond, light on our feet and in our hearts, talking and laughing with my dear and special friend.

Wow, I so relate to this. I have been writing a post in my head about a similar situation. I don't remember a day in my childhood without her, she lived across the street from me. We were more than sisters for 24 years and she just gradually weened me out of her life. Work, home, this, that...never even time for a glass of wine. It still bothers me to this day. We both had a very abusive childhood and I can only guess that I am that one true reminder of where she came from and she wants to leave that all behind her and me with it.

Just because they decide to let us go doesn't mean we feel/felt the same way so we are left with the memory of what was and the loss of what will never be again.