June always reminds us of our fathers, and Carol Graham welcomes the opportunity to tell her dad’s tale and her lessons from Father. Read more from Carol on her blog.

In a small German village on New Year’s Eve, 1903, my father, William Frederick, was born. He was the oldest of thirteen children. Life was challenging and after my father’s brother was born, my grandfather traveled to the New World. Grandpa worked hard to save enough money to bring his family to America. 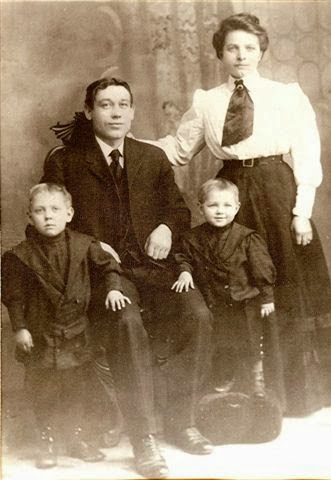 The day came when my Grandma and her two little boys could travel across the seas to unite with Grandpa and have a better life. There was not enough money for the three of them to travel as passengers. My dad and his brother were stowaways in the hull of the ship. It was a three-week journey with little food for the boys to share. My father was four years old and would go the kitchen and beg for the table scraps that had been thrown away. Often, he was reprimanded for being there and given nothing to eat.

When they finally arrived and settled in Milwaukee, Wisconsin, life was not as good as Grandpa had described. They were very poor and there was very little work. Although my father was able to attend school, he had to quit in fifth grade to help support the growing family. The children came very close together and dad was more of a father to his 13 siblings than a brother.

Hard work paid off and by the time my dad met and married my mother he had his own farm. Although it was evident that he would become a successful farmer, his passion was to be a minister. It was not an easy decision and he struggled with it until one day he arrived home just in time to watch his home and farm burn to the ground. He believed this was a sign that he was to change direction. He attended seminary and became an ordained minister.

It was the Dirty Thirties and although life was extremely difficult, my dad always had a large garden and fed as many people as he could with his harvest. He pastored a small church in northern Wisconsin.

MY SISTER DIED AT 12 YEARS OLD

In 1944, my sister Arlene, died of rheumatic fever at twelve years of age. My father almost died of a broken heart at this loss and didn’t think he could ever preach again. But, time healed his wounds, and he became even stronger as he could empathize with so many others who had suffered similar loss.

In 1950, he was offered the position as pastor of a church in one of the fastest growing cities in the U.S.A.  – Detroit, Michigan. This was the beginning of a new life for all of us, including my two brothers and a sister.

My mother was gravely ill by the time I was born and I grew up watching my dad take care of his wife and family, much like he had done as a very young boy. I became extremely close to my father and gleaned so much wisdom from both his lifestyle and what he taught me.

“DO IT RIGHT — DO IT NOW!”  This was probably one of his greatest lessons.   How to overcome procrastination using this man’s SECRET  is very simple.  Do it right and do it now.  I apply this to everything several times a day.  NO EXCUSES!

“FEED YOUR FAITH – OR FEED YOUR FEAR”  Whichever one you choose to feed will grow. The one you don’t feed will die. Again, a very basic and simple philosophy that has helped me maintain perspective in precarious situations.

“FORGIVENESS — IT’S A CHOICE!”   If we choose not to forgive, the only one we hurt is ourselves. It can eat at us like a cancer and destroy us.

My mother died when I was a teenager and my father when I was 35. I feel both were taken from me too young. My parents left me with a heritage of strong integrity, morals and ethics. My father lived what he preached. I miss them as much today as when they passed away.

My children never met their grandparents but I have tried to keep memories alive of their heritage and instill in them the same philosophies by which my father lived.

Do you have any lessons your father taught you that made a difference in your life?

Carol Graham is the author of a fast-paced award-winning memoir, Battered Hope, the blog Never Ever Give Up Hope, and a regular contributor to numerous blog sites. She has a monthly column in Book Fun Magazine and has been published in several anthologies including a best-seller. In 2015, Carol received the Woman of Impact Award from Focus on Women Magazine and Author of the Year for her memoir, Battered Hope. Carol hosts a bi-weekly talk show Never Ever Give Up Hope in which she interviews people with remarkable stories of how they conquered overwhelming obstacles and achieved success. Never Ever Give Up Hope has an international audience in over 70 countries. In addition to motivational speaking, hosting a talk show and writing, Carol is a business owner, a wife, mother, grandmother and together with her husband have rescued over 30 dogs.