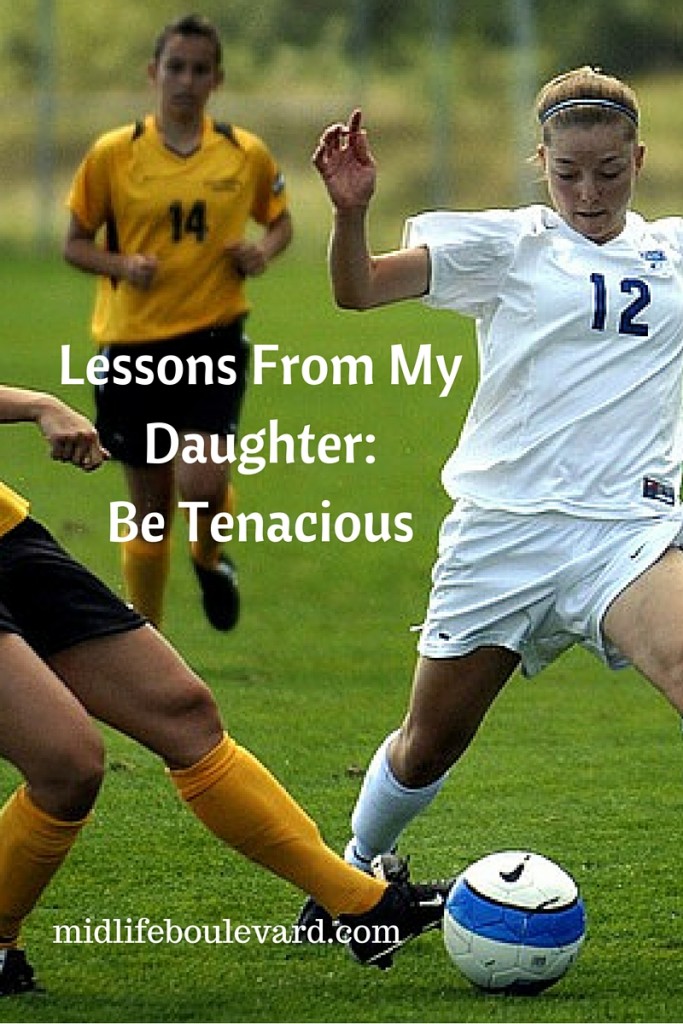 Laurie blogs regularly at A Square of Chocolate. This post was originally featured there.

Singer, Gloria Estefan and The Miami Sound Machine, had a significant stamp on music back in the 80’s. They had a signature Latin pop sound that was hugely popular. Gloria, a fantastic singer, dancer and entertainer, is now having her story told in a Broadway musical production, “On Your Feet.”

Beyond her music, she has proved to have tremendous strength and determination after breaking her back in a serious bus accident in 1991. The prognosis was that she would possibly never walk again. She proved everyone wrong. With excruciating physical therapy and rehab, she did get on her feet again.

Her story is what has inspired me to tell mine.

The only connection I have to this type of physical determination is with my daughter, who at the height of her high school soccer career had to deal with an injury that could’ve broken her spirit.

She had been playing soccer since kindergarten attending many practices, games and tournaments over the years. She was now a junior in high school and with all her efforts, it enforced her desire to play on the Varsity Team her senior year.

We had watched her grow and improve into a skilled player. She had terrific discipline and determination for a young lady. Her drive to do well along with having the best “hang in there” attitude was inspiring.

This attitude and determination would be challenged on the last game of her JV season. A collision on the field caused her to come down hard and twist her knee, which is every athlete’s worst fear. It was a torn ACL and meniscus. This type of injury usually means a season ending injury. The only silver lining was that it was the last game of the season.

Would there be time to recover from this injury in time for varsity tryouts? Her soccer future looked pretty grim. Many amateur athletes don’t come back after an ACL injury. It was extremely maddening after all the years of playing soccer that it could all possibly end during her senior year when it meant the most.

She had to overcome the pain of surgery, endure months of physical therapy and, all the while, keep her “hang in there” attitude intact.

Many people experience challenging moments in life. Some are physical, some emotional and some are heart-breaking. Finding the positive, pushing through and coming out the other side even stronger is what makes a person find purpose. It leads to being proud of their achievements.

I watched my daughter push through her pain, get stronger through physical therapy and stay positive. She recovered just in time for varsity tryouts. To be honest, her athletic abilities had changed. She had become less assertive on the field, didn’t make the running cuts and breakaways like she once did. During the tryouts she felt somewhat unsure of herself, but did the best she could. We were told these were all normal post injury aftermaths.

Happily, she DID make the varsity team that day!

Truthfully, I think what got her on the team is what the coaches already knew and saw in her that day. It wasn’t all about how many goals she made, how fast she ran or how skillfully she could handle the soccer ball. It was her reputation as a good team player. They also observed the strength and determination she had after such an injury. She was an asset to the team in a different way.

She put in the hard work, stuck with it, stayed positive and had the courage to get back on her feet and SHOW UP! I’ll admit she didn’t have her usual or best playing season, but she hung in there and proved to herself and all of us that she wasn’t going to give up.

I can’t tell you how many times I look back and remember this moment. She had succeeded in her goals and it was very inspiring. I don’t think she realized what she had accomplished or how this situation played a role in her maturity.

As we get older the tenacity from our youth fades. We may doubt our capabilities. Sometimes knowing too much causes us to be filled with skepticism. We’re afraid to take chances and risks. As parents, we watch over, take care of and teach our children.

In this instance, I learned from my daughter. No matter what age, we never stop learning. It was a refresher course to not give up on goals and to simply show up. It’s what any of us should do when we’re lacking confidence or ability. We need to make those small steps to move forward.

So, Get On YOUR Feet – it just may surprise you who shows up!

Laurie is a wife and mother living in Minnesota and determined to uncover the second half of life with zest and zeal. She has a background in marketing and accounting for the last 25 years and recently discovered that one can’t live by adding machines and numbers alone. Therefore, she created a humor written lifestyle blog. Laurie is a food enthusiast, loves comedy and enjoys writing and creating a story with a humorous twist. Laurie has been a contributor to Erma Bombeck Writers’ Workshop, Midlife Boulevard and Sammiches and Psych Meds. Also, Laurie is a contributing author in the bestselling anthology, "Feisty After 45," published by Mills Park Publishing. Visit Laurie’s blog, A Square of Chocolate, and join in for a smile at http://www.asquareofchocolate.com/

Laurie, you are soooo right! We are finding that the Encore Voyage part of our lives is full of thing to learn and experiences to be had! You are never to old to do what you love! You know, dog...tricks...! Your daughter has shown you the right idea!

Lynn, you're so right! This old dog is learning new tricks, but it keeps us feeling young! I love the message of your site "An Encore Voyage." I'll be following your lead on new journeys and discoveries. Thank you for taking the time to stop by and comment.

On of life's greatest thrills is watching our children respond to life's problems with fortitude and tenacity. It is a parent's greatest compliment. This story was beautifully done. Thank you for sharing.

Thank you so much Carol! Your statement couldn't be more true and I'm definitely a proud mama.

This was beautiful, Laurie! I shed a few tears (happy tears) though as the memories flooded my brain. I am so proud of my granddaughter as you are of your daughter. You are also a great example and mentor to her, and for that I am so grateful.

Thank you Victoria for your kind words and taking a moment to read my story.

As one would guess, our group of women at midlife is filled with avid readers. I decided to take a...