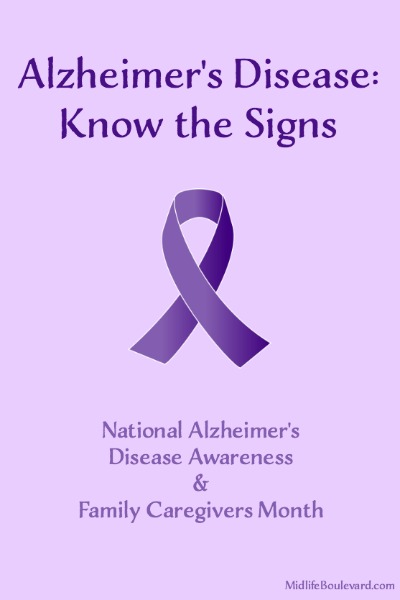 Awareness Month, so it is a perfect time to discuss the differences between normal age-related brain function changes and the devastating effects of Alzheimer’s disease.

Does this sound familiar? You walk into your bedroom, stop and look around dumbfounded. “What did I come in here to get?” No idea. Maybe if you walk out and come back later, your brain will remember. One of the biggest concerns women have as they get older is whether or not they will end up suffering from Alzheimer’s disease, which is the most common type of dementia.

Memory, concentration, learning, problem solving, and reasoning skills all tend to decline as we grow older, and by older I mean the fifty-something’s and beyond. It is considered a normal part of aging to have some difficulty remembering certain facts, people and places.

The menopause transition is a particularly challenging time for women, because this is often when you personally experience more difficulty with verbal memory. Verbal memory has to do with recalling words. The classic symptoms of menopause—hot flashes, night sweats, poor sleep, fatigue and mood changes—can make cognitive ability even worse. Even women who are not having symptoms will complain of forgetfulness and focus issues. In fact, 60% of you, particularly during perimenopause and early menopause, will notice that your brains are not working at their very best. This whole constellation of symptoms often gets tossed together and is called brain fog.

Women often joke that their brain fog is a sure sign that dementia is approaching. But, of course, it is not. Dementia refers to a severe loss of intellectual ability and is diagnosed when memory and other brain function duties decline enough to significantly interfere with independence and the performance of regular daily activities. Dementia is not forgetting someone’s name for a few minutes or wondering why you came into a room. It is characterized by not being able to remember how to get home or whether you have eaten. The typical brain fog complaints associated with perimenopause and menopause do not come anywhere close to the severity of those linked to dementia.

Alzheimer’s disease is the most common cause of dementia and usually affects women over the age of 65. In fact, it really is a disease of older women and the number affected by Alzheimer’s makes a great leap once women hit their 80s. Although health care professionals can diagnose Alzheimer’s earlier than ever before, the only way to actually confirm the diagnosis is by performing an autopsy, which will show characteristic amyloid plaques and neurofibrillary tangles in the brain.

You are at higher risk for Alzheimer’s disease if you have a parent with the disease, suffer from high blood pressure, abnormal cholesterol, diabetes or have had a stroke. So what can you do to reduce your risk? Exercise! Doesn’t it always seem like that is the answer to many of life’s toughest challenges? In the case of Alzheimer’s dementia, maintaining a healthy lifestyle, which includes daily exercise, has actually been scientifically shown to reduce the risk of this dreaded disease.

So as we approach a New Year, let’s all commit to improving our health and reducing our risk of Alzheimer’s disease. We can start with a brisk walk, which really is not too much to ask. All you have to do is put one foot in front of the other.

I’ll meet you at the park with my dog, Sadie.

Dr. Tara Allmen is one of America’s leading experts in menopausal medicine. She is a Nationally Certified Menopause Practitioner and highly respected in the medical community. Inspired to reach millions of American women over the age of 40 with accurate scientific information that can help them, Dr. Allmen has appeared numerous times on local and national television, and created an extensive library of video information available on her website, www.drallmen.com. Dr. Allmen earned her bachelor’s degree from Johns Hopkins University and her medical degree from the State University of New York at Stony Brook. She completed a residency in obstetrics and gynecology at the University of California, San Francisco. Dr. Allmen lives in New York City with her husband, Lawrence M. Kimmel, their two children, and a small dog named Sadie. Credentials: - Board Certified Obstetrician and Gynecologist - National Certified Menopause Practitioner - Fellow of the American College of Obstetricians and Gynecologists - Dr. Oz Show Medical Advisory Board - CEO, The Allmen Foundation - Wife, Mother and Friend