Pat writes over at pattymackz.com and you can find the original version of this post there.

While most people have been using smartphones for ages, I finally inherited a hand-me-down iPhone 5 from my husband’s secretary. At long last, I possessed that amazing little gadget that can do everything but wipe my backside. I can get organized, FaceTime with family, text message friends and dance my heart out to iTunes. Just one problem, they don’t make smartphones for dummies.

Case in point ME. When I went to trade in my antique Nokia recently the clerk laughed out loud. “Wow, it’s been eons since I have seen one of these.” 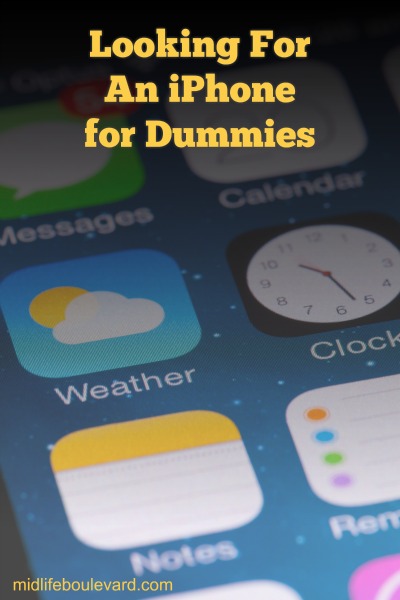 Within 48 hours of activating my phone chip, I made so many gaffes the Frenchman threatened to confiscate it.

While walking home from school, I tried calling the hubby at his printing office in Lausanne; instead I rang my daughter at her pediatric clinic in Minneapolis. That went down real well.

In PE class, I thought I was recording students’ lap times; instead I was setting the alarm clock.

“Who’s calling?” I screamed – waking up later that night.

When it comes to technology, I am one step behind and a term or two off beat. When my students told me about that instant messaging thing, I said, “Cool! I need to get what’s up.”

They laughed me out of the classroom.

“It’s not what’s up,” a student said, ‘it’s Whatsapp, an application for text messaging.”

Application? One uses an application to seek employment, to enter university, and to do calculus. What does application have to do with finding out, “What’s up, bro?”

It gets worse. During a staff meeting my sweatshirt pouch burst out singing in Janet Jackson’s voice. I swore I turned off my walking-to-school music. Savvy colleagues explained that moving around with an iPhone in your pocket could turn on iTunes.

Texting is a whole other ballgame. Seriously, how can anyone text and drive? It’s like diving off a cliff with your hands tied to your feet. Even at my desk with both hands on my device, I have yet to text without falling off my chair. Besides by the time I punch in the correct letters, my brain’s faulty memory bank has already forgotten the message. Even my 81-year-old, nimble-fingered mom can text faster than me.

Stranger things keep happening. Yesterday all by itself my little iPhone burst into song and dance, playing Walk the Line by Johnny Cash… I don’t even like Johnny Cash. Next thing I know Sandra Beckwith, a marketing guru, is telling me how to sell more books – from a class I took five years ago. My husband, who was watching Netflix on TV downstairs, explained that sometimes it sets off iTunes when the computer nearby is on the same network. Well, how dumb is that?

Worse yet, every time he receives a call for a crisis at work, my phone rings, too.

And if these phones are so smart, how come they get lost all the time? Mine has little electronic legs and never stays where I put it. When I misplaced it at school, I stayed up all night worrying that a techie teen would crack my code and access my top-secret contact list.

But you know me; I am always willing to give it a go. So send me your cell number and I’ll ring you the next time I’m in your neighborhood, if can catch that darn phone that keeps running away from home.

I am convinced my iPhone 5 is possessed, so I am upgrading as soon as they invent that smartphone for dummies.

As a pioneer in women’s basketball, Pat McKinzie is the first female athletic scholarship recipient in Illinois and first female player to score 1,000 points at ISU. She is one of the first Women’s Professional Basketball League draftees and female inductees in the Hall of Fame at Illinois State. After a 1983 car accident in France ended her playing career, McKinzie began to focus her energy on coaching. With thirty years of experience in coaching, teaching, and writing, she has cultivated an impressive career from hall-of-fame coach to basketball agent, student adviser, columnist, and blogger. McKinzie has a bachelor’s degree in education from Illinois State University. She is married to a Frenchman with whom she raised two Third Culture Kids, and currently resides in Switzerland.

We have all been there… we leave a mall after dark and feel uncomfortable walking through a dimly lit parking...