“Stay a child while you can be a child…with me…” – The Witch (Meryl Streep), Into the Woods

Attending an entertainment industry blogger roundtable with Tracey Ullman, Christine Baranski and Meryl Streep was a very exciting way to experience this kind of event for the first time. With just 27 Mommy Bloggers (that’s what they called themselves) and myself, much of the conversation between these 3 amazing actresses and the rest of us was about parenting – which is a major theme in Into the Woods. The witch (Streep) is the ultimate helicopter mom, hiding away her child from the world, wanting to keep her safe from all of the evil and danger she might encounter. The Stepmother (Baranski) is obsessed with getting one of her daughters married off to the prince (shades of Kris Kardashian?), and Jack’s mother (Ullman) is terrified for her son’s safety as he climbs up and down the beanstalk – much like so many mothers are fearful for their sons these days.

These three actresses shared their thoughts and concerns about parenting now vs. parenting when their children were small, and how challenging it seems to them to be raising a family in the age of ubiquitous screens and headphones. Longtime friends, they experienced motherhood together, and in fact some of their children had playdates when they were growing up. By sharing these small details, Ullman, Streep and Baranski went from being movie stars to being simply moms, just like the rest of us. 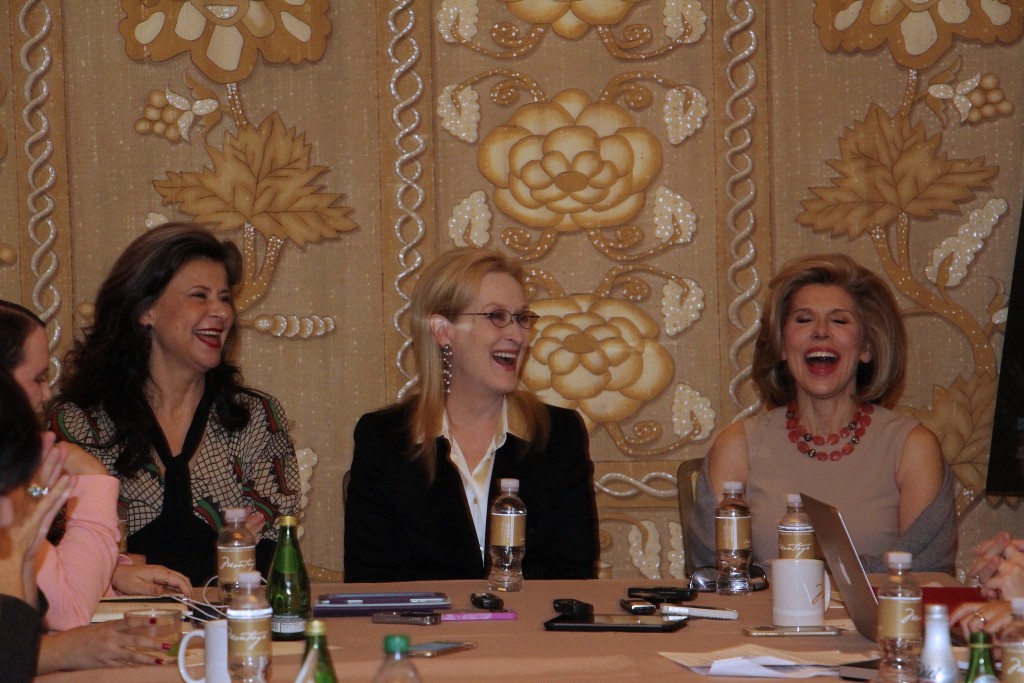 Sharing a laugh at the Into the Woods roundtable.

Each of them expressed their love and passion for being a mother, and appreciation for their husbands.

“It’s a trick being a wife and mother and actress and having that longevity,” said Baranski.

“It’s a tribute to our husbands,” said Streep.

When asked about any similarities between their characters mothering styles and theirs, Meryl Streep said “I hold my girls a little too closely.” What mother doesn’t sometimes?

In Into the Woods there is such pain around the idea of motherhood, from the baker’s wife (Emily Blunt) who is desperate for a baby, to the mother obsessed with keeping her child close and the predictable consequences of her behavior (Streep’s witch). What each mother – even, in her twisted way, Cinderella’s stepmother with her daughters- is trying to do is make sure her child is happy, safe and loved – which is the goal of every mother in the world, isn’t it?

One of the Mommy Bloggers asked if any of the actresses had any advice for those with young children, and whether the film is something they would have taken their 6 year old children to see.

There was much conversation about keeping children safe, about keeping them away from things that will scare them. But fairytales are meant to address children’s deepest, darkest fears, whether it’s getting lost in the woods or having no one to love them. They all agreed that Into the Woods would be fine for most children to see, because as Streep said, “Kids know so much…they’re aware of so much…yet they’re innately hopeful.”

You may be wondering at this point how I, who with two grown kids is clearly not a Mommy Blogger, was invited to this event? Coincidentally it’s because I’m a mom. My daughter works with Meryl Streep.  I was told to introduce myself to her if I had the opportunity to ask a question – which of course I made sure I did. After I told Ms. Streep that I was my daughter’s mother, here is what she said to me:

Well. That was something special. And at that moment, I did feel that I had done a pretty good job indeed. 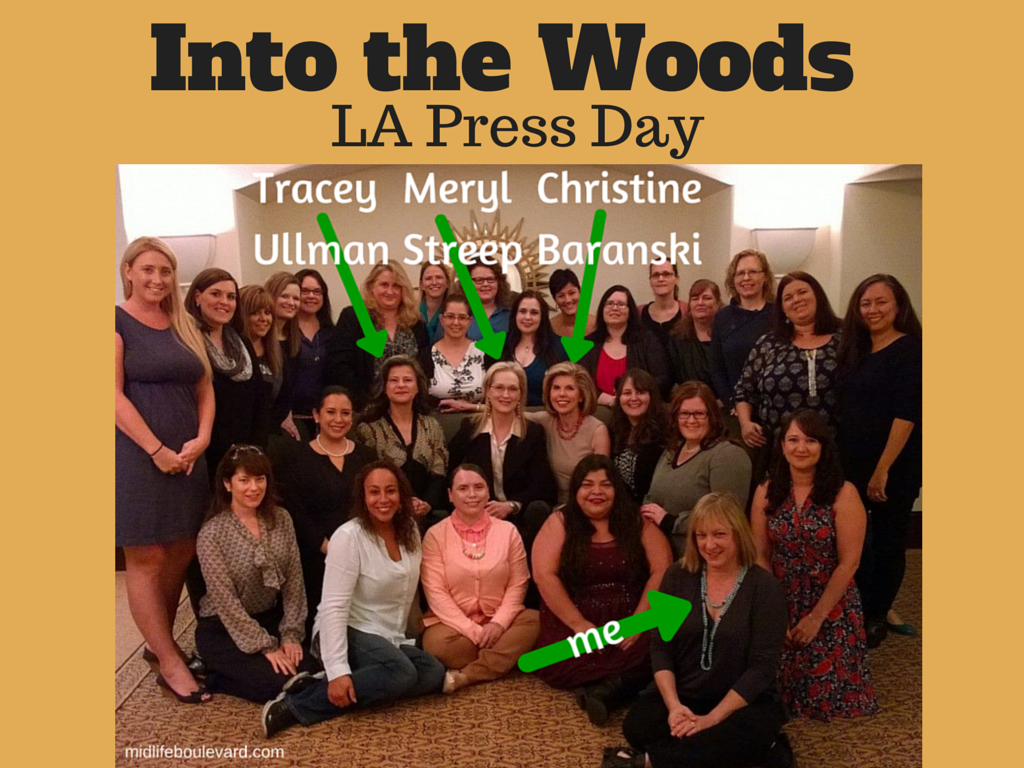 We must trust that our children can learn and understand the difference between real and make believe, between good and evil. As mothers, it is our responsibility to let our children explore beyond their safe places and become aware that fear is a way of comprehending what’s right and wrong in the world. Into the Woods gives us all a chance to see that. Though not everyone gets their happy ending, they get the ending they were meant to have, and have most like learned much along the way.

Into the Woods is a wonderful film, directed by Rob Marshall and also starring Anna Kendrick, Emily Blunt, James Corden and Johnny Depp. With a score by Stephen Sondheim and James Lapine  and amazing costumes by Colleen Atwood, Into the Woods is an extravagant visual and musical experience. It’s rated PG and opens Christmas Day everywhere. Don’t miss it!

What a great opportunity for you and what an honor to have Meryl Streep give you such praise. You must have been kvelling!!!

what a wonderful experience for you and how fortunate that you beautifully represented us empty nesters with such aplomb! If I know you ( and I do) you're daughter is amazing. Well done my friend and happy holidays!

What an awesome experience. And yes, isn't it wonderful when our mothering skills are validated? Especially by Meryl Streep!

Sharon, Great interview. Meryl Streep is one of my idols. Your daughter is so fortunate to work with her.

What an amazing experience that must have been! I have always been a huge fan of Tracey Ullman and Meryl Streep. Just knowing what I do about you I'd imagine you are a fabulous mom!