Editor’s note – today we recognize National Nothing Day, all day. So sit back, relax, and do…nothing!

Even if we’re not Protestant, many of us still subscribe to the Protestant work ethic. 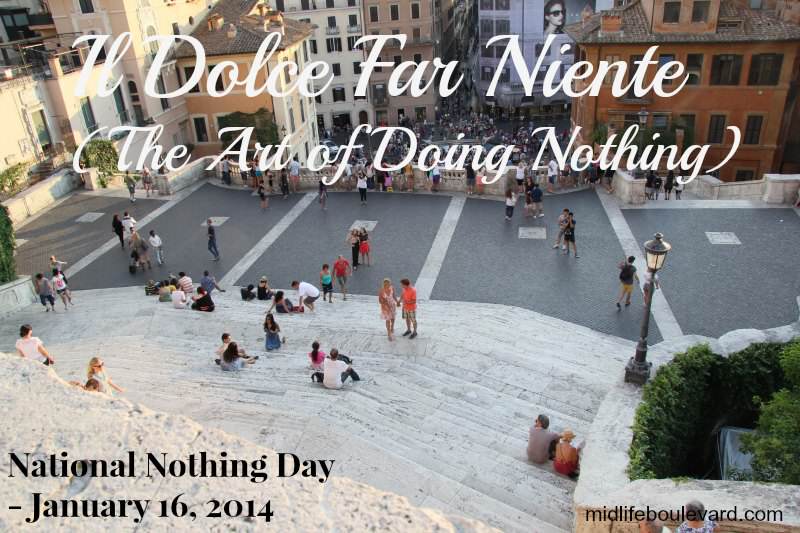 We’ve simply got to be doing something. In motion. All the time.

{Ok, maybe my generation was the last. I’m not so sure younger generations have it. }

I stayed with someone I know once after she gave a dinner party. I wanted to go to bed but she stayed up washing dishes, cleaning up and mopping (yes, MOPPING) so that by 1 a.m. her pristine house looked like no one had ever been there. {It was remarkable to me. I think I’ve even blogged about this before.}

Although of Italian descent, she is clearly unfamiliar with the concept of carefree idleness. Italians call it dolce far niente: the sweetness of doing nothing, and it describes my life these past months.

It’s harder to do than it sounds.

People want others to work. To be productive. To do something with their lives. To not squander their gifts.

I get that. People I know expect me to have a hard time with doing nothing. A harder time than I’m actually having.

I worked for decades.

I started working when I was 12, for my father, in his pediatric office. When I was old enough for a work permit, I held summer jobs. I worked full-time or almost through my second half of college and through grad school. Then, I went straight to full-time professional work, no breaks.

Two years ago, my husband suggested that I leave my consulting job. He saw that I should have quit several years before, and affirmed that we could manage fine without my salary. He suggested I continue to teach at a local university, for the love of it. So I did, until I left Florida a year ago.

Since then, I’ve done a little bit of consulting, but nothing else.Part of me feels a little guilty, I have to admit, that I’m not doing anything “productive.”

I should be writing a book like I planned.
I should go back to teaching writing. Or teaching something.
I should do some consulting.

But I’ve enjoyed il dolce far niente far more than even I thought.

The days go by quickly.
I cook fun meals.
I see friends.
I read. A lot.
I write. But mostly for the blog.
There’s Netflix, Hulu, Showtime, HBO and On Demand.
Facebook is a fun time-suck.
I see my friends.
I feed the homeless.
I spend time with my trainer.
We’ve moved, twice.
We travel.
And I’ll soon be doing mixed-media collage at a local art studio,
something I’ve wanted to do for a long time.

Still, though, there’s part of me that feels that something
is missing. That when days meld into each other without clear demarcation and a greater purpose, they have no meaning.

After a while, il dolce far niente wears a little thin.

I don’t feel forced to do something just to be doing it.
But since I am blessed to not have to do anything in particular,
I am actively thinking about what I’d really like to do.

And just as I wrote that, this came on the radio:

“If she knew what she wants….”

Read more from Carol A. Cassara on her blog

I'm an essayist, a blogger, a teacher and someone who loves to live out loud. My essays have been published in Chicken Soup for the Soul, the Christian Science Monitor and various literary and news publications.

I'm an essayist, a blogger, a teacher and someone who loves to live out loud. My essays have been published in Chicken Soup for the Soul, the Christian Science Monitor and various literary and news publications.

Hi Carol! Thanks for the great reminders here. And isn't it funny how busy you can still be when you don't have to do anything? Here in the Palm Springs area of California there is a HUGE retirement community and they all make me tired just trying to keep up! While I still work (some) I try to take some time every single day to do nothing. Some of the sweetest times I have are just sitting and chatting with my husband while throwing a ball for the dog. Sometimes I catch myself with the thought--well if I just did this or that then I'd be...what? Happier? I don't think so. Good fro you for living a very slow and sweet life right now. ~Kathy

You're like Sharon. I've never seen anyone do so much work from a Hawaiian vacation!

Such a bad habit. from my high tech days when we worked nonstop. I've broken that habit, now, though.

The gift economy represents a shift from consumption to contribution, transaction to trust, scarcity to abundance and isolation to community....