I wasn’t always the Midlife Boulevard travel editor. Before I morphed into a travel blogger, I was a lawyer. 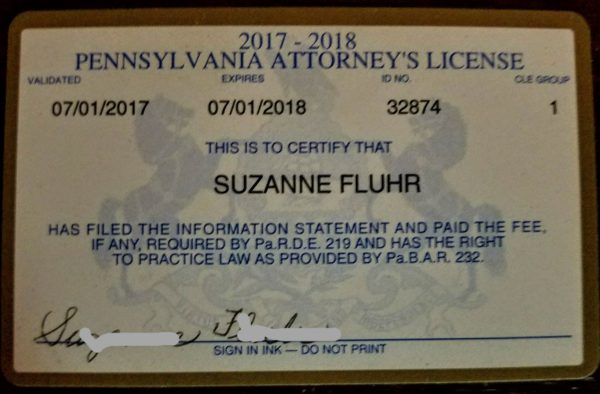 My law license still resides in my wallet. Why have I crossed out my signature? Because as a lawyer, my mantra is: “Just because you’re paranoid does not mean they’re not out to get you.”

I graduated from law school in another century, 20 years before Y2K. In case you’re a lawyer and went to law school because you can’t do math, that was 1980.

During or about 2005 (because lawyers are taught to hedge on dates), as I was laying on a hospital Emergency Room gurney, waiting to find out if I was having a heart attack or just a stress induced severe GERD (heartburn) attack, my physician husband (Mr. Excitement) leaned over and said, “Do you need this anymore? Stress kills, and I’d like to have you around for a while.”

He was referring to my full time career as a lawyer. If you’re a lawyer (or live with one), you know that “full time” means doing work (or worrying about doing work) for no less than 60 hours per week. At the end of those hours, you feel as though you still haven’t finished your work, but you’d like your children and your spouse (if s/he hasn’t yet left you) to remember what you look like.

Before I could answer my husband’s earnest question, the ER doctor returned with good news. She had reviewed my EKG, chest xray and blood tests. Based on the results, she could rule out a myocardial infarction and I could have a “GI cocktail” for the searing pain in my chest. Within ten minutes the pain eased considerably, and although I was a little woozy, I felt I could make it to the Social Security disability hearing on my schedule for later that morning. My client had been waiting for over a year to have his case heard.

At 7:30 a.m., I had asked my law partner to call the Judge’s office to explain I was in the ER and would need a hearing continuance (postponement). I called my law partner back and told her to tell the Judge that if he didn’t mind me appearing for the hearing in my “go to the ER in the middle of the night” attire, I could show up for the hearing. She reported back that the Judge was thrilled because he had scheduled an expert witness for the hearing. Fortunately, at 2:00 a.m., even through a haze of pain, I had decided to wear a bra as I dressed to go to the ER.

As I walked from my office to the hearing office in jeans and a tee shirt, still sporting my hospital ID bracelet, I realized I knew the answer to my husband’s question. Later that week, I gave my law partners six months notice of my plan to semi-retire and do the firm’s appellate brief writing, part-time from home.

Although I submitted my last legal brief in 2015, and being the Midlife Boulevard travel editor is fun, I still can’t quite get that law monkey off my back and maintain my law license, paying the yearly fee and attending 12 hours of Continuing Legal Education each year.  After all, the day I learned I passed the Pennsylvania bar exam was the happiest day of my life—and I’ve been married (twice) and gave birth to two children. (Don’t judge).

Have you adjusted your work life as you slide through mid-life?

Hi! You asked if I readjusted my worklife as I slide through midlife. My goodness, what hasnt changed! My marriage, my business, my home(s) and where I live, as well as my profession, have all changed in the past 3 years! Reinventing myself was partly out of necessity and partly due to the need for new adventures!

Basic Facts about Sexual Lubricants for Women Over Fifty Anyone who enjoys sexual intimacy should be using a personal lubricant....