Marcia Kester Doyle from the blog  Menopausal Mother remembers her first period, and her last period. Much like a house guest, you can miss them when they come, miss them when they’re gone, but hope they catch on fire and die during that middle part when they are all up in your business.

I was the last girl in my group of friends to get my period. I was also in a training bra longer than most of the female population in North America. I could never catch up with the other girls in my class. By the time I bought my first A-cup bra, my peers were tossing aside their C cups for D’s.

Same goes with my period. While all my friends were stocking up on sanitary pads, I was still stocking up on Charms pops and gum wrappers for my gum chain. Every time one of the girls called to tell me they’d started their period, I was a bit envious.  “Do you look different?” “Do you feel like a real woman now?” “Do you know you can get P-R-E-G-N-A-N-T?!” 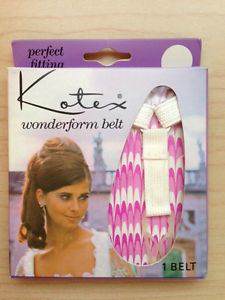 I didn’t get my period until I was almost thirteen, and let me tell you, it was a big disappointment.

Not that I was expecting a parade with balloons, confetti and fiesta-colored tampons. I just thought that on such a momentous occasion, there would be some sort of fanfare…or maybe just a nice dinner out with my family, where everyone would raise their glass in a toast to my period and say, “Job well done! Welcome to womanhood!”

I even checked out my reflection about ten times that day to see if I had changed. Nope. Still  a goofy looking 12 year old with braces and a little patch of freckles across my nose from the sun. It also didn’t help that my chest was as flat as a tortilla.

None of that really mattered. All I cared about was that I finally had my period and the right to carry bulky, cotton pads in my purse. I could finally sit in a circle during P.E. with all the other girls and complain about cramps, bloating, and the messiness of it all.

The best part about having a period  was being able to avoid doing things I disliked. I didn’t have to run track in P.E. I didn’t have to don a swimsuit at swim parties where all the other girls were shaped like Barbie dolls. When my mother discovered the 14 wrappers from the World’s Finest chocolate bars in my drawer (that I was supposed to sell in the band fundraiser), I blamed the binge eating on chocolate cravings from my period.

I liked having my period, especially the power it gave me to manipulate certain situations. I could be moody or foul-mouthed and it didn’t matter—everyone blamed my Jekyl and Hyde personality on my period. It gave me a license to act out and plead insanity caused by high hormonal levels for one week out of each month.

This fun lasted about six months until one day when I got off the bus and started walking home, a group of boys behind me burst into laughter. I had no idea what was so funny until I got home and saw the dark stain covering my back side. That was the day I lost my power and my period betrayed me.

I was extremely paranoid and self-conscious after that, constantly checking my underwear at school for any accidental visits from “Aunt Rose.” I soon hated the fact that all of my activities revolved around my period:

“Sorry, can’t go to the beach today. If I get in the water I’ll become a shark magnet”

“Sorry, no, I can’t wear the new white sun dress to the high school dance tonight because someone might think I fell butt first into the red punch bowl.”

What about the savvy girls who learned to use tampons early in their menstrual cycle? We had some unsavory names for them, smug in our certainty that there was only one reason they were actually able to use a tampon with ease. We secretly gossiped and criticized them as we waddled down the school halls in bulky pads the size of diapers. And we thought we were the smart ones!

Fortunately, my periods became more accurate as I became older. I could pinpoint the day the spotting would begin, and the calender never lied. It made pregnancy planning pretty easy, except for the one “oops” baby, but that was the champagne’s fault. If my period was a day late, it meant one thing and one thing only–that I wasn’t going to see it for another nine months.

My period remained predictable most of my life, until this past year. It simply…vanished. After the first month without it, I was terrified that I would end up on the cover of The National Enquirer: FIFTY-ONE-YEAR-OLD WOMAN GIVES BIRTH TO TRIPLETS—CLAIMS SHE NEVER KNEW SHE WAS PREGNANT! I was on the verge of buying a home pregnancy kit when a close friend snapped me out of my momentary insanity. “You’re not pregnant dummy, you’re menopausing!”

“Wait a minute,” I cried, “Who stole my period? Was it that twelve-year-old down the block? She’s wearing makeup and she has breasts! I’ll bet she stole my period!” And then the little voice of reason inside me spoke. “Who cares? You’re free. Free! Burn the tampons! Use the panti liners like sponges to clean the kitchen walls. You’re free!”

Again, my joy was short lived, because although my period had stopped, the symptoms did not. Each month I’d break out in pimples (I never had acne in high school, so why now?), experience painful bloating and gas (you don’t want me to go there), horrific mood swings and tears over stupid things like Publix holiday commercials. The kids run for cover at the first sign of hormonal changes in me. That usually happens when my mouth forms a thin line and I start resembling Jack Nicholson in The Shining.

For six months I lived period-free. I cleared the bathroom cabinets of all feminine products and started carrying smaller purses. All was well until the day I attended the local renaissance festival. It was an unusally warm day, and I was dressed in my renaissance finery—hoop skirt, slips, lace–the works. I crammed myself into the tight, dirty port-a-potty at the park to pee and guess who came knocking at the door? Yup. Good ol’ Aunt Rose, back from an extended vacation in Bermuda, and nary a tampon in sight.

It was a horrible period that lasted ten days (or was it ten months?) and it drained me of all energy and enthusiasm for life. Even a chocolate bar did nothing to lighten my spirits.

The PFH (period from hell) finally faded away, but this time I held onto the box of tampons like a shield, just in case.

Another six months passed, and it was time for my daughter’s college graduation. I was so excited to get out of town for a few days and to see my daughter receive her diploma. The suitcases were packed and stuffed into the car, and after a final check on the locks and lights around the house, I took one last trip to the bathroom before hitting the road.

You guessed it. Aunt Rose. But this time I was prepared. I blew the dust off my box of tampons and tossed them into the car. The Red Sea was not going to stop me from visiting my daughter.

The way I see it I’m due for another period during the Christmas Holiday season. Maybe on Christmas day. Perhaps Aunt Rose will be too busy skiing in Colorado to bother me. Or maybe not.

Lol...I was the last in my group too. Omgoodness the boys in my class were brutal. I looked forward to menopause, the end of aunt flo, the hot flashes (I was always cold) the end of the cramps etc..until it hit me like a 2x4:)

Great post as always Marcia, I was 13 when that lovely time of the month happened for me..and I haven't had a cycle since I was 47... good riddance, I hope it never returns... I do sypathize with the other side effects though... I can't wait until those leave too..Soon I hope;-)

Lucky you that it's gone! Now you and I both just need to wait out these sucky symptoms of menopause…...

Wow, you ladies do have to endure inconvenience with Aunt Rose and Aunt Flo. However, based on my experiences with my good lady wife, I think it is Aunt Arid who arrives during the menopause!

As always, your writing triggered a fit of giggles and snorting.

Thank you, Gary! I truly appreciate all the support you have been giving me---it means a lot. You ROCK!

I was a VERY late bloomer, not getting my first visit from Aunt Flo til I was 17. My gravest fear is that she'll leave as late in life as she arrived. And I'm pretty sure Medicare won't pay for tampons.

Oh wow, that IS late!!!! I'll keep my fingers crossed that your menopause time is BRIEF so you won't have to buy stock in the Tampax company.

So, I never thought I'd type this sentence on the internet...here goes nothing: I didn't get my period until I was 16. Not a typo. SIXTEEN!!!! (Put that on a resume. Add no boobs, and I was all the rage with the boys.) I pretended to have a period so that I would feel normal. What in the world was wrong with me? Now I want to pretend that I don't have one, and why is it that as I get older, Aunt Rose becomes a bigger b*tch?

Wow! I was a late bloomer myself--the last to get a period and boobs but not THAT late. Hey, good news is that maybe you'll hold off on menopause and not have any symptoms until you're……75?