In preparation for Hanukkah,  I’m sharing my favorite recipe for Low-Fat Latkes. 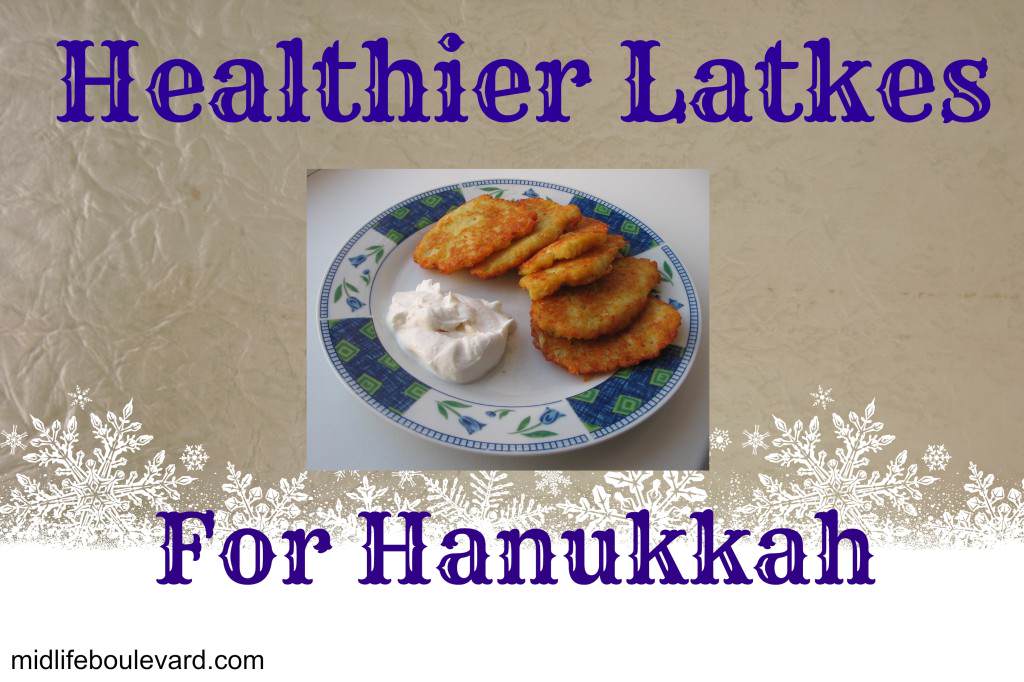 This recipe appeared in the New York Times in 1999. (I can’t believe that I’ve been making these latkes for more than 10 years.) Similar to their creator, food writer Steven Raichlen, I too have to watch my fat and cholesterol intake during my life after 50. That’s why I especially like these latkes which are baked, not fried, and are made with egg substitute or egg whites. I use low-fat sour cream and unsweetened applesauce as healthier toppings too.

One of the other good things about this recipe is that it creates a lot less mess and grease than when you make fried latkes. The secret is to get the baking sheets really hot and coat them with oil before placing the potato mixture on the sheets. That way the latkes come out nice and crispy. Olive oil is used as a healthier fat alternative.

So dear midlife girls, here’s the Low-Fat Latke recipe. I hope you try them and let me know how your latkes turn out. This recipe may become part of your Healthier Holiday Table for years to come. Remember to keep eating your fruits and veggies. Did you know that eating lots of fruits and veggies can help reduce your cancer risk? The American Cancer Society recommends eating at least 2-1/2 cups of vegetables and fruits each day. (I try to follow this suggestion each day – Bolthouse Farms Green Goodness Smoothie is on my breakfast menu, an apple, orange or pear for dessert for lunch, and a big salad for dinner, plus I make baked sweet potatoes often, especially during the winter months.)

The recipe says that the yield is 50 to 60 latkes; 8 to 10 servings. I made larger latkes and there were only three of us at the dinner table – me, my boyfriend L and my son D. We ate them all. Not a shred of potato was left in the serving dish.

Read more from Judy Freedman on her blog, A Baby Boomer Woman’s Life After 50

Judy Freedman is a fifty-something female baby boomer. Her blog, <a href="http://aboomerslifeafter50.com">A Boomer's Life After 50</a>, is targeted to the millions of baby boomer women (born between 1945 – 1964) who are going through a similar life journey in mind, body and spirit. Widowed at the age of 50, she is learning to reinvent herself. Her philosophy is to age gracefully, be optimistic about the future, and keep her chin up…so her neck stays forever wrinkle-free. Judy's blog was recognized by The Huffington Post as one of their 2012 Favorite Blogs for Women Post 50 and won a 2013 Webby Award Honoree for Personal Blogs. Judy retired from her 30 year corporate communications career to pursue her passions during her life after 50. Instagram: judiboomergirl

My HOME reflects where I’ve been and what’s going on at the present. It has been a haven, nest and...