In the 15 years that I’ve worked at my local public library, I’ve learned that we librarians do plenty of things for our patrons that aren’t in our job descriptions. After a patron asked me to change her flat tire, and another wanted to check out our pencil sharpener,  I logged onto my favorite librarian hangout on Facebook and asked:

What’s the oddest thing a patron has ever asked you to do?

Someone just asked me for a good book to read on the toilet. 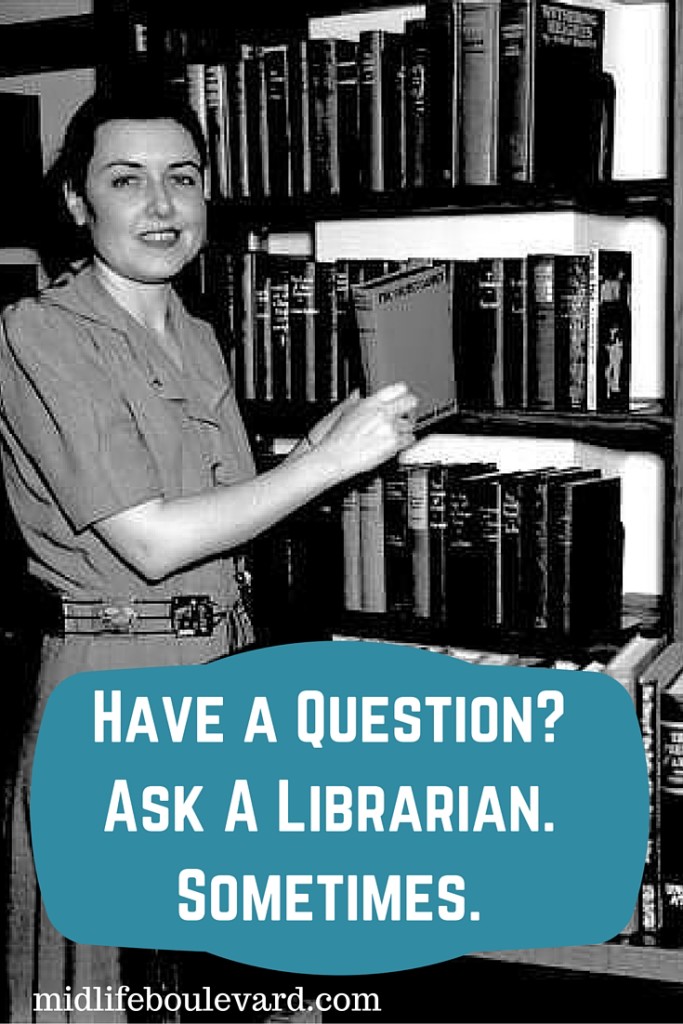 A patron who was on his way to the casino wanted to rub my red hair for good luck.

Last week a woman came in asking for my help to get the witches and demons to stop pinching her.

A patron once asked me to sit on his lap. (I laughed at him.)

Unusual Patron Requests proved to be a hot topic. Within a day, I had over 100 responses, as librarians shared stories about that special patron who:

I soon realized that  Odd Patron Requests fell into categories. Some requests were from patrons who wanted to look their best — with our help.

Some requests were car-related:

There were numerous requests for  Library Hanky Panky:

Librarians have been asked to break the law:

Many unusual library questions are medical in nature:

Some patrons want to take our innate helpfulness and eagerness to serve the library community to the next level:

We are also called upon to Identify Things:

We’ve also been called upon to research a variety of interesting topics:

Librarians are helpful by nature, which means that often we’re just fine with going above and beyond our job descriptions to perform small acts of library kindness:

One librarian responded with a different take on this topic:

I have come to the point where I no longer think the questions are outrageous. Where else can these people turn? The library should help them if we possibly can. After all, some college libraries now circulate bicycles and some public libraries circulate Kindles. So why not jumper cables?

Despite the odd requests, we librarians remain undaunted. We continue to love library work. And of course, everyone loves a library story with a happy ending. For instance?

A divorced dad came to Story Hour, asked me out, then asked me to marry him!! I did!

(Roz Warren is the author of OUR BODIES, OUR SHELVES: A COLLECTION OF LIBRARY HUMOR   This piece first appeared on www.womensvoicesforchange.org.)

All this just goes to show how much librarians are loved!

It was a day of playful distractions as I emailed back and forth with a former lover. It started with...