December 12, 2015 marks the 100th anniversary of the birth of Francis Albert Sinatra, considered one of the most influential singers of the 20th century. With 59 albums, 13 Grammy Hall of Fame records, 2 Grammy Albums of the Year, 2 Academy Awards and countless other honors and commemorations, Sinatra is one of the most familiar and beloved voices and a Hollywood legend. His charm and sex appeal were legendary, but ultimately it’s his voice that will keep him part of the American musical culture for generations to come. 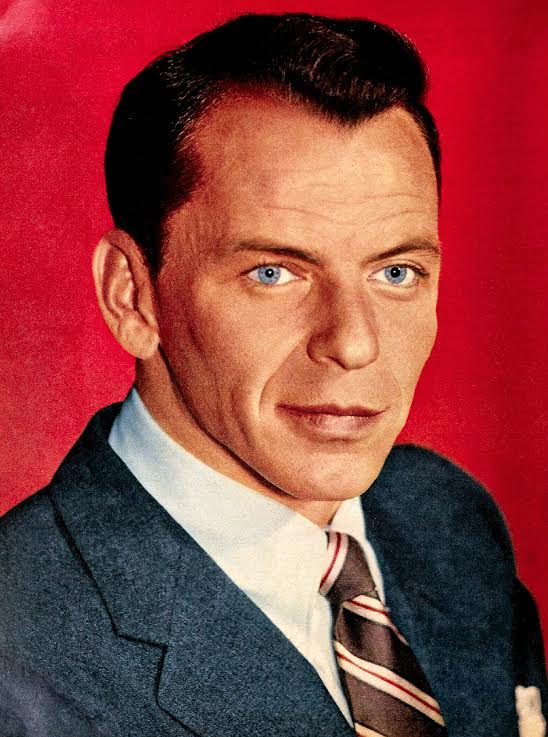 “I’ll Never Smile Again” (Tommy Dorsey Band 1940) was Frank’s first big hit, while he was a singer with Tommy Dorsey and his big band. Frank was the first genuine teen idol, and his young fans became known as “bobby soxers.” Frank’s rapid rise to fame with the Dorsey band soon eclipsed the band itself, and he left in 1942 to pursue his solo career, but had to pay Dorsey $75,000 to get out of his contract.

The House I Live In – is a short film made by and starring Frank that was awarded a special Academy Award 1945. The film’s message was in opposition to anti-semitism and prejudice at the end of World War II. Despite his rough guy reputation, Frank was dedicated to equal rights for all races and religions, in particular the African American community. He gave away tens of millions of dollars to hospitals, charities and countless private citizens who were in need over his lifetime.

In 1954 after a long career slump, Frank won the best supporting actor Oscar for his role in From Here to Eternity. Frank claimed that the first time he read the book he knew he was destined to play the part of Maggio. After the painful end of his second marriage, to the glamorous actress Ava Gardner, many colleagues and friends worried Frank’s career had topped out. Nothing could have been further from the truth. 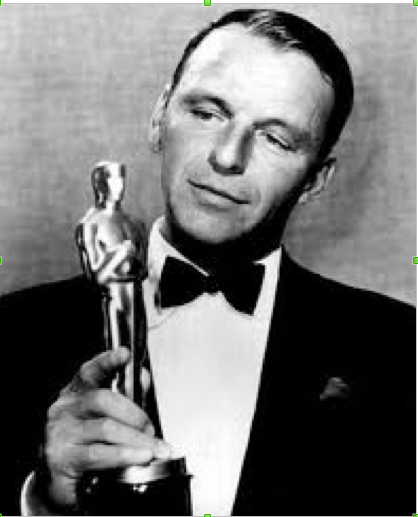 Following the end of his slump and his move to Capitol records, Frank began what were considered by many to be the most exciting and productive years of his vocal career, working with arranger Nelson Riddle. Included on his 1956 iconic swing album Songs for Swingin’ Lovers was “I’ve Got You Under My Skin. “It took 22 takes for Frank to feel he got it just right. It was worth the wait. 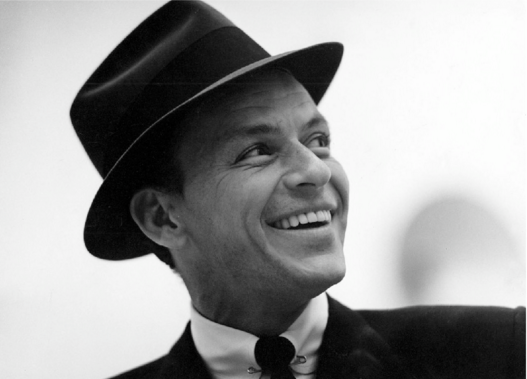 1956’s High Society featured Frank in a supporting role. It holds a special place in movie musical history for the pairing of Sinatra with one of his idols, Bing Crosby for the first time. Particularly charming is in number “Did You Evah?” Also starring Grace Kelly in her final film before becoming the wife of Prince Rainier of Monaco, this movie is a delightfully fun way to spend 2 hours.

Frank’s 1959 Grammy winning Album Come Dance With Me, recorded with arranger Billy May, is quintessential Sinatra – brassy, fun, loud and confident. Coming on the heels of his Golden Globe winning performance in Pal Joey, Frank was in his prime, and would usher in the 60’s as the man every guy wanted to be and every girl wanted to be with. 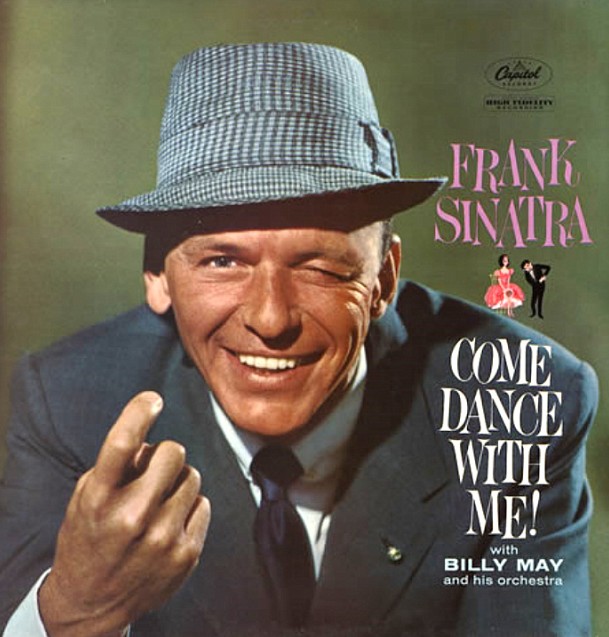 In 1965 Frank was inducted into the Grammy Hall of Fame. In 1966 his album September of My Years, recorded on his Reprise label, won the Grammy for Album of the Year, and “It Was a Very Good Year” won for Male Vocal of the Year. Frank and the Rat Pack – Dean Martin, Sammy Davis Jr., Peter Lawford, Joey Bishop, and assorted other characters – were having a great time, all the time. 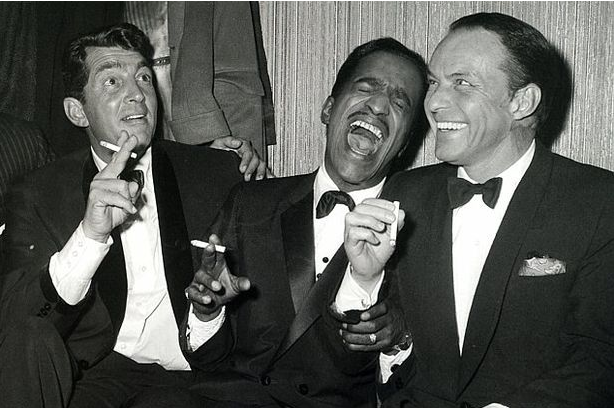 One of Frank’s biggest hits was “Strangers in the Night,” released in 1966. Unfortunately it was a song that Frank hated, despite it being a huge success. Frank said of the song:  “It’s a piece of sh*t” and “the worst f**king song I’ve ever heard.”

Another song Frank wasn’t crazy about was his recording of Paul Anka’s “My Way,” which spent 3 years on the top 100 Billboard chart. And though Frank hated rock and roll, one of his favorite love songs was the Beatles’ “Something,” which he recorded in his own inimitable style.

In 1971, Frank Sinatra was given the Gene Hersholt Humanitarian Award by the Academy or Arts and Sciences. The acknowledgement of his philanthropic work by his professional peers was an honor that thrilled him. 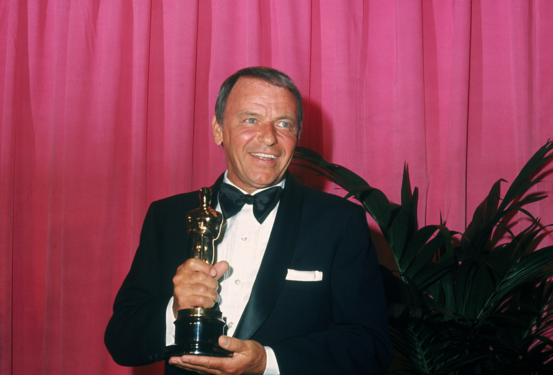 After retiring in 1971, Frank decided to make a comeback with the 1973 album Ol’ Blue Eyes is Back. No longer a young man, Frank covered some beautiful songs on the album, including the haunting “Send in the Clowns.” In 1974, he performed at Madison Square Garden in concert for The Main Event, with an audience filled with celebrities, fans, friends and family. It was MC’d by Howard Cosell in the style of a prize fight.

Frank continued to perform in the 70’s and 80’s, spending quite a bit of time in Las Vegas. In 1980 he recorded an ambitious triple album, Trilogy: Past, Present and Future, which featured one of his last and greatest hits, the Theme From New York, New York. Frank spent his later years happily married to his 4th wife, Barbara Marx Sinatra (previous wives were Nancy Barbato Sinatra, Gardner and Mia Farrow). They lived in Beverly Hills and Rancho Mirage, California, where on of the main thoroughfares is named Frank Sinatra Drive. He continued performing up until 1997, and took great joy as he got older in spending time with his children and grandchildren. He died on May 14, 1998 at the age of 82. It’s a good bet that he lived life to the fullest.

Frank liked to end his concerts with this quote: “May you live to be 100, and may the last voice you hear be mine.” That wouldn’t be such a bad way to go. 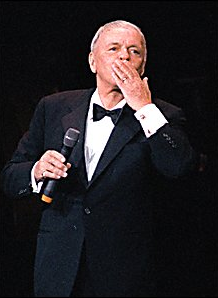 You know how I feel. I think I've OD'd (if there is such a thing) on watching and listening to everything Frank this month. I downloaded the app and am loving Wednesdays on TCM.

My grade/high school chum Lisa Romeo told me our friend from high school's cousin, Chuck Granata, is the producer of Siriusly Sinatra with Nancy. I am more than jealous. Now I'd LOVE to buy the new book being touted on Sirius and TCM by Charles Gignone (sp?) about Frank.

One more thought: I loved when Dinah Shore discussed, in the Mel Torme documentary, that she and Frank left Mitch Miller (who was a son of a bitch) because they hated his style of music that he was forcing them to do. Thank G-d they did. I hated his work!

Nice informational piece. Who could not like Frank's style and music. Most certainly a one-of-a-kind gent and I had no idea he had experienced a career slump. This is a little dose of reality knowing that even a man of his talents and charisma endured some down swings.

Merry Ex-Mas: Advice for Divorced Parents During the Holidays

When my ex-husband and I divorced twenty-or-so years ago, our sons were three and four. Being divorced was, needless to...