I had a date in November that didn’t turn out quite like I expected. In fact, because of a miscommunication, we were almost two ships passing in the night. Fortunately, we sorted it out and met in the middle at a large boisterous chain restaurant I would have avoided in other circumstances. I was so happy and relieved our wires didn’t cross that I greeted him exuberantly with an overly intimate hug and I was completely transparent with glowing compliments and leering; his pictures simply didn’t do him justice, this guy was extraordinarily handsome with a body to die for.

Shallow? I can be shallow. I like a bit of arm candy especially if the candy keeps up their end of the conversation. And he did. Our jovial connection was also helped by his equal physical attraction to me.

What a surprise when a woman walked up to our table with an envelope and a rose. 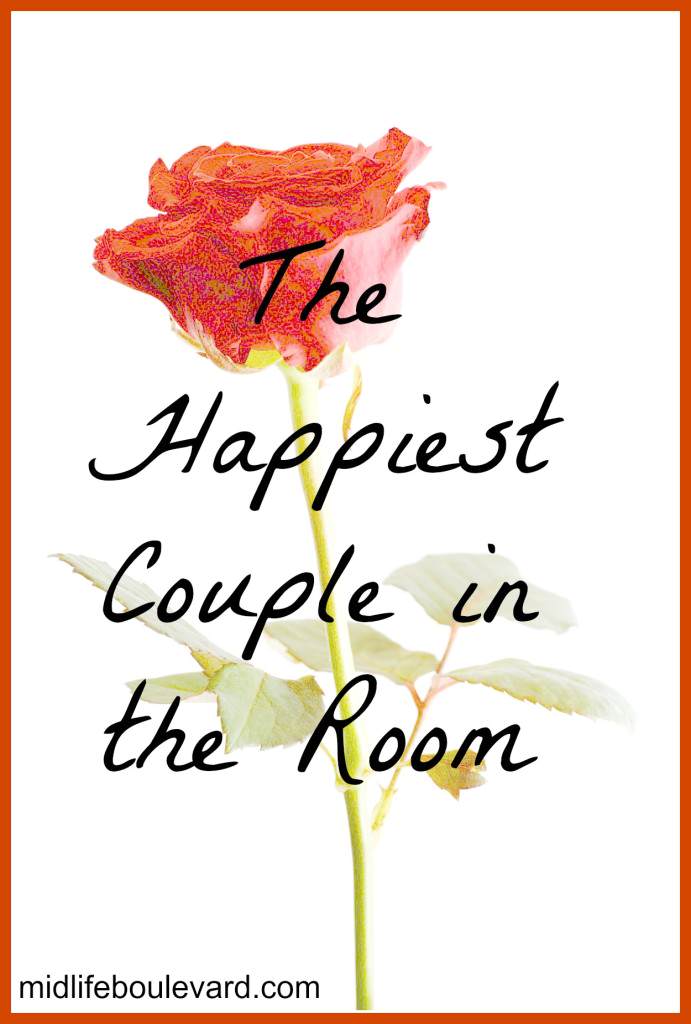 At first I thought my sweet friends in Japan were responsible. They have been my cheerleaders and love me. But they didn’t know about this date and this restaurant was a totally random pick out of convenient geography after crossed wires and stupid traffic. So that wasn’t it. And whoa! If this guy did this on a whim he was

(a) resourceful
and
(b) creepy because this wasn’t that kind of date.

Sure this was a first date but we weren’t getting together in breathless anticipation of creating a life together. Needless to say we were both intrigued as young woman explained:

“This is weird but just go with it. A lady came in tonight and asked us to find the happiest couple in the room and present this to them. The staff all think it’s you guys.”

The happiest couple? Hell, we don’t even know each other. Sure I’m happy but that’s because I’m happy. He’s certainly happy because he is a happy person. I was a little embarrassed and wanted to explain our story but stopped myself because I had to see what was in that envelope. I accepted the pretty red rosebud and dove into the envelope like it was small box from a jewelry store. There was a single sheet of pink paper neatly folded in thirds around a fifty-dollar bill.

To whomever receives this:

My name is Cynthia. . .I asked the manager to give this rose and money to the “happiest couple in the restaurant tonite [sic]”. Let me explain why.

On October 30th I started communicating on Match.com with an extraordinary and a wonderful man named Kevin. Kevin was unlike anyone I had ever met and touched my heart like on one ever has before. And over the course of just one week we became so connected. To both of us, it felt like magic. We laughed at the fact two people in their 50’s felt like giddy teenagers and couldn’t believe how lucky we were to find each other. (he gave his Match.com login information to his daughter—who pushed him to join a few weeks ago—so she could see my pictures). We talked of the future and things we’d like to do together. There was just a “knowing” that this was “right” and something special. . .Then suddenly, last Thursday his calls and emails stopped. He wasn’t logging on to Match and wasn’t returning my calls. And I was hurt and confused to say the least. Then on Monday morning, I received an email from Kevin’s daughter (the one he gave the login to) through his Match account telling me that Kevin died instantly of a massive heart attack on Thursday. In her email she shared with me that Kevin called her every day during that week telling her how happy and excited he was to have connected with me and that she had not heard that kind of happiness in his voice for a very long time. She closed by saying, ‘Dad was taken from us way too soon but his final days were filled with a very special happiness and you were responsible for that. I will forever be grateful to you for reaching out to Dad and touching his heart as so few ever could.’

To say I am broken hearted is an understatement. But knowing I brought him such happiness the last 7 days of his life is both humbling and a source of comfort.

Which brings me to why you have these things. Tonite was going to be our first date. And, it was to be here—at ———-. I wanted to do something to honor Kevin’s life, and the happiness we felt with each other, even briefly. And giving it some thought I decided one way would be to bestow some gifts on the happiest couple here tonite. And apparently, that must be you two.

Thank you for letting me honor Kevin in this way, even though you don’t know either of us. I think he would be pleased as he was a kind and generous man. I wish you much continued happiness.

Cynthia, I hope you aren’t disappointed the happiest couple wasn’t really a couple. I haven’t seen the man I was with that night since then. But your letter touched my battered heart and I’m pursuing something more meaningful than a tryst with someone I’ve never met.

My new situation is an odd situation, and even though my new man and I  haven’t laid eyes on one another there is a delightful intellectual kismet between us. Kevin’s death is a pointed example why it’s important to take risks. Life is so fleeting and precious.

So I am taking the biggest risk I’ve taken probably ever: my Handsome Stranger and I are off on an unprecedented adventure in a few weeks.

Cynthia, don’t give up. Love will find you. The Universe is a benevolent place and if you knew that much happiness you will know even greater happiness. Trust me on this.

Love this story--bittersweet and yet hopeful. I'm assuming we are going to hear more about this adventure with the Handsome Stranger!

I have hopes to discover what happened to Cynthia.

That was quite a story. It was like a scene from a movie!

Right after Thanksgiving each year, I visit New York City with my mom, sister and aunt. We try to have...