It happened at midnight on a Saturday in May of 1982 just after prom. I’d pushed the screen out of my bedroom window and had one leg flung over the sill when I turned back to my sister, Gina.

She was half-asleep in her bed, which was next to my bed, now occupied by three pillows shoved under the blanket shaped into the figure of what I hoped would look like my sleeping body should my parents poke their heads into our room. 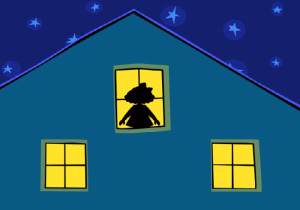 I flung the rest of my body through the open window and darted pell-mell across our front lawn into the waiting arms of my prom date, Albert Schmitzon (a pseudonym, but you know who you are!!).

I wholly blame my parents for this post-Prom tryst. I was 16-years old and had never been alone with a boy on a date because my parents were the Hormone Gestapo.

I believed they could instinctually detect any surge of hormones I might have while watching David Cassidy on The Partridge Family or listening to Andy Gibb sing How Deep Is Your Love? So I was flabbergasted when they allowed me to attend my junior prom with baseball playing Albert.

My dad, who is frugal to a fault, even went so far as to purchase the most gorgeous white ivory, pink-ribboned and tulle prom dress for a whopping $200.

I have absolutely no idea what kind of madness came over him. All I know is that when I stepped out of the changing room in that gown, truly feeling like a beautiful princess, all my zits and frizzy hair forgotten, dad’s eyes softened and he said, “You can have it if you want it.”

Going to prom with Albert was a coup. I was popular in high school, but I absolutely wasn’t cool. I hung out with the female jocks and the Mensa nerds.

Albert, on the other hand, was a card-carrying member of the cool kids; he hung with the football and baseball players and the Songbirds; cheerleaders not to be confused with the Varsity Yells who were cute, but not hot and gave the impression of keeping their knees together.

There were rumors that the kids in the “cool group” were already sexually active while my group were by-and-large virgins; either by choice or default.

So going to prom with Albert was both exciting and terrifying. I was in no way ready for the fast-lane, but I still really wanted to be cool and desirable.

So imagine my horror when my parents informed me that I had to be home from the prom by 11 p.m.

“Eleven pm?” I shrieked, “But the dance is in Newport Beach, which is an hour away. We’ll barely have time to get there and eat before we have to turn around and come home?? I’ll be a laughingstock!”

Prom, prom, you infernal gauntlet of societal caste systems. Having to come home from prom by 11 p.m. will relegate me to the realms of the wildly uncool Untouchables.

Oh, ignominy of all ignominies why?? Especially when we were going to double-date with uber-cool Jerry Zachary and Inga Ellis. This meant they’d have to come home early too!

I seriously thought about, not just pretending to come down with a case of meningitis, but actually coming down with a real case of meningitis, wherein I would come so close to perishing (though just managing to pull back from the brink of death in the nick of time) that my parents would feel chastened by their own rigidity and assholery and change my curfew to 6 a.m.

Unfortunately, I was perfectly healthy throughout the week preceding prom, hence had to go.

The good news, however, was that I really took my time getting ready, like a cool girl would do, so that I was only ready an hour early.

After peeing for the sixtieth time the doorbell rang and there stood Albert, decked out in his tux, holding a lovely wrist corsage for me. My heart practically thumped out of my chest as he took me down the walk and placed me in the back of a Jerry Zachary’s parents’ Cadillac.

As we pulled away from the curb, I checked my make-up in a compact mirror when what to my horrified eyes did appear, but one black whisker poking out from my chin! What. The. Fuhhhh?

I panicked. Where the hell did that thing come from?

My mind spun wildly back to memories of my mother (who is of Czech descent) and the full mustache she had prior to undergoing electrolysis. It appeared that my parents were going to be cock-blocking me until the end of time.

I have faint memories of the actual prom. I know there was some kind of rubbery chicken served beneath a patina of gelatinous ooze. I know that I was forced onto the dance floor where I tried to calibrate my rhythmic movements somewhere between dancing too eagerly and too cadaverously. It was a fine balance.

Then I remember the clock striking ten and this Cinderella having to get her be-tulled ass home.

Something unexpected happened on the drive back. Albert and I made out. This, I’m afraid, was a revelation.

Things became so heated so quickly that I realized, like a thunderbolt, that this was exactly the reason my parents kept my sister and I in lockdown. All rational thought was impossible under the onslaught of Albert’s kisses. I became amorphous, fluid, the proverbial silly putty in his hands.

We arrived home at exactly 10:55 p.m. I was still the “good girl” following the rules right up until the moment when Albert asked me if I could possibly slip away to join him in a hot tub and Jerry Zachary’s house?

I loved my parents and was suitably terrified of them, but the Kraken had been unleashed.

“I’ll meet you just outside my bedroom window in 10 minutes.”

And so it came to pass that 10 minutes later I was climbing out of my bedroom window and threatening my younger sister with full-scale war should she screw this up for me.

Then I was dashing across our front lawn, a bathing suit clutched in my right fist and straight into the backseat with Albert where we once again fell to kissing.

Suffice to say that I returned home at 2 a.m. with wet hair, clutching my dripping bikini in my left fist, Albert by my side, with my chastity intact.

However, I’d glimpsed passion and possibility and it had changed me.

I  could see womanhood not too far around the next bend and felt a sense of emancipation right up until the moment when I tried to open my bedroom window and it wouldn’t budge.

Someone had locked it.

I glanced confusedly at Albert. This is when we both heard my father’s Clint Eastwood-esque voice from the nearby porch, “Shannon,” he said, “you’ve slit your own throat.”

To say my blood turned to ice in my veins would be an understatement. My bladder let go.

I turned to tell Albert he’d better leave to discover the only thing visible of him were his white tennis shoes flying through the night, already a half mile up the street.

It turns out his tennis shoes were the last I’d ever see of Albert.

He never picked up his prom photos and I never saw him at school again.

I thought maybe he’d moved into the Witness Protection Program, but it turns out he did finish out his senior year at my school, but somehow clung to the shadows every time I came into view; my first lesson that a kiss doesn’t always mean the same thing for a boy as it does for a girl.

In four short years my eldest daughter will be old enough to go to the prom. I’m going to buy her a gorgeous dress. I’ll help her do her hair and make-up and let her stay out until six in the morning. The only caveat being that I will accompany her for the entire date.

If you’d like to read about my even more humiliating senior prom you can click Here. Or you can like me on Facebook Here. And you also have the great fortune, or peril, of signing up for my free newsletter Here!

Darcy Perdu (So Then Stories)

Ha! Love this story! Favorite part: It appeared that my parents were going to be cock-blocking me until the end of time. HA!

Hi Darcy -- I suppose I have them to thank for my not becoming a teenage mother.

I really enjoyed your piece and smiled the whole way through! Great story! I just liked you on FB and followed you on Twitter, and cannot wait to read more by you. So what was your punishment? Inquiring mind want to know!

Parri I love your moniker and wish my thighs would've thought of it first! I was grounded for a month. Not even one phone call was I allowed.

Fun suggestions for mother's day gifts for the cool mom who's into all things nerdy/geeky. Instead of one present, combine...