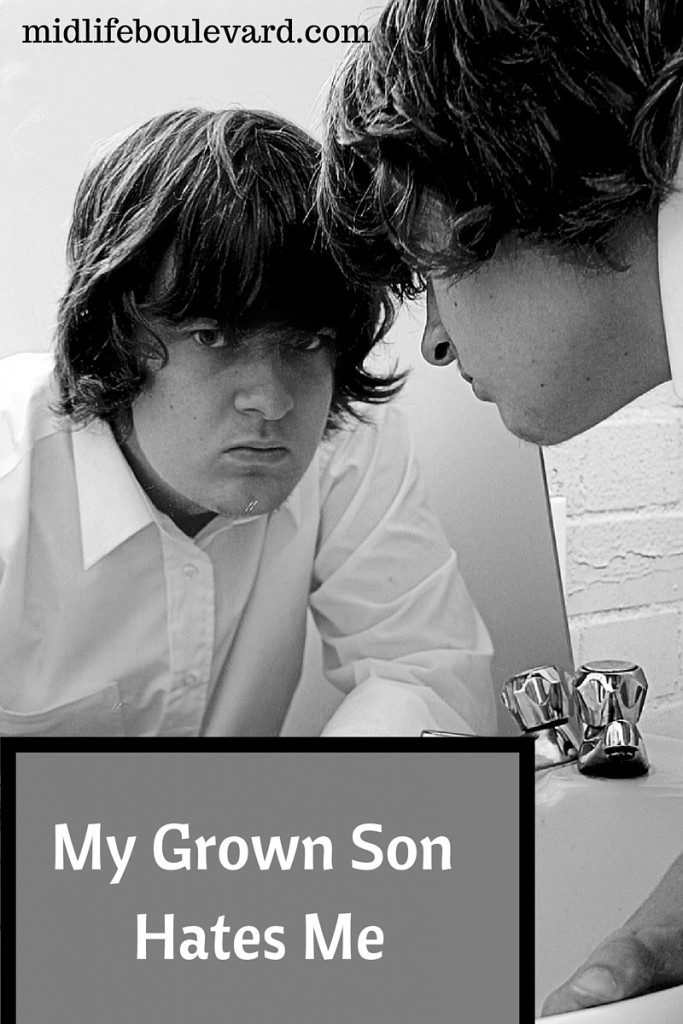 I gave birth to a sweet little baby boy. He was a beautiful baby with bright blue eyes and colic. I had to stop nursing after three months because he chewed my nipples off.  This was probably the first sign that we were going to be at odds. I ignored it, naturally.

When he was three, he amazed us with his intelligence. He could grasp ideas and figure things out quickly. For instance, he was holding a hammer when he realized that if he tried to fix the imaginary crack in the hundred gallon fish tank, fish would flop all over the living room carpet and soak his new red sneakers.

He had quite the imagination at age five. His imaginary friend always seemed to get him in trouble. He would tell my son to knock over the five hundred mini-juice cans that his brother made into a huge tower. He was always shocked when the tower of cans crumbled, covering the bedroom carpet. “My friend told me to do it. Punish him, not me,” he’d tell me, while his brother threw a fit.

The early teen years arrived like a typhoon. Life was never dull. Who knew that if you tried to smoke a joint at the community pool, you’d get reported? Who knew that? Why didn’t anyone tell him and his friend? They should have been warned. That was a tough lesson to learn during a very hot summer. No joints at the pool! Go home and sweat!

During that heat wave that summer, he decided to grow his hair long. I told you he was intelligent. We had more battles over his long, wavy, brown hair that hid his eyes. The first time he asked for money for a haircut, I rejoiced. Then he came home with the same hair and no money. He got fast food instead.

I finally got tired and tried reverse psychology. He’d asked for money for another haircut and I calmly replied, “You can’t cut those beautiful waves now. You have blonde streaks from the sun. No way can I let you cut your hair. It’s beautiful. People would kill for those waves and color.” He stood there puffing and blowing his bangs off his forehead.

Another time, he brought home a deer head to mount. It was the coldest winter in history in PA. He put it in the garage in a bag and went to call a taxidermist. But then he got distracted when I told him the lizard escaped from its cage. In the spring, he remembered the deer head when the entire neighborhood was overpowered by a horrible, putrid odor coming from our garage. We spent hours with gallons of disinfectant trying to get rid of that smell.

And then there was a night when he had a dream about my dad who had died. In the dream my dad asked, “Where have you been? I haven’t seen you in a while.” At one in the morning, in the midst of a lightning storm, he needed to go to my dad’s grave site. He insisted he had to talk to him. I couldn’t reason with him. The dream was so real; he had to go to the cemetery. I drove him. He asked to stop at an all-night convenience store to buy a red rose to leave with my dad. We reached the cemetery and he hopped the fence. I waited for twenty minutes in the car.

I sat in the pouring rain thinking I must be crazy. Who does this? Why didn’t I just say, “No?” I needed windshield wipers for my face. The tears wouldn’t stop. It seemed so important to him, I didn’t have the heart to let him drive alone. When my heart leads me, I find myself sitting at cemetery gates, in a thunderstorm, at one in the morning, in my bathrobe. He got back in the car and thanked me for driving him. “I feel better now after talking to Pop,” he said quietly. Tears spilled onto my bathrobe. I put the car in gear and drove home.

We’ve traveled a long and winding road. Looking back, I find myself trying to understand why it is exactly that he hates my guts now. I think – what kind of mom does those things? I don’t know. Maybe one day things will be different. I can only hope so.

I am 62 and Bipolar. I have lost both parents in the last 3 months. My son who was very close to them got it in his head I was not allowed near either parent as they lay dying. I couldn't say goodbye or hold their hands & whisper comfort to them. He through such a tantrum I left the nursing home.

After a very contentious funerals my sister (Executor) & myself, POA opened the will to find my sister & I split everything. My son went berserk & insisted he deserved their house & contents, loaded with antiques.

He stole many item including handguns before I could stop him. We offered him $10 k as a down payment if he wanted to buy the house. This only made him angrier & he assaulted me, called me the Devil threatened to burn the house down with him in it if he didn't get it & now won't speak to me. I called his pastor & as many friends as I could before he told them I was crazy & not to talk to me.

He is my only child that I had after years of being told I would never have kids. I m so beyond broken hearted. I am so afraid he will never speak to me again, yet I know he really needs help. He refuses to accept any help or accept that he needs it. I m moving to central america, Belize until the estate is out of probate because I feel I'm in danger staying here. My brother took his own life in 2008 & he is so much like my son it scares the crap out of me. I don't know where to turn. He is using my love against me.

Meniere’s Disease: What Is It?

Roz Warren is the author of Our Bodies, Our Shelves: A Collection of Library Humor (affiliate link - get your copy today!). This...