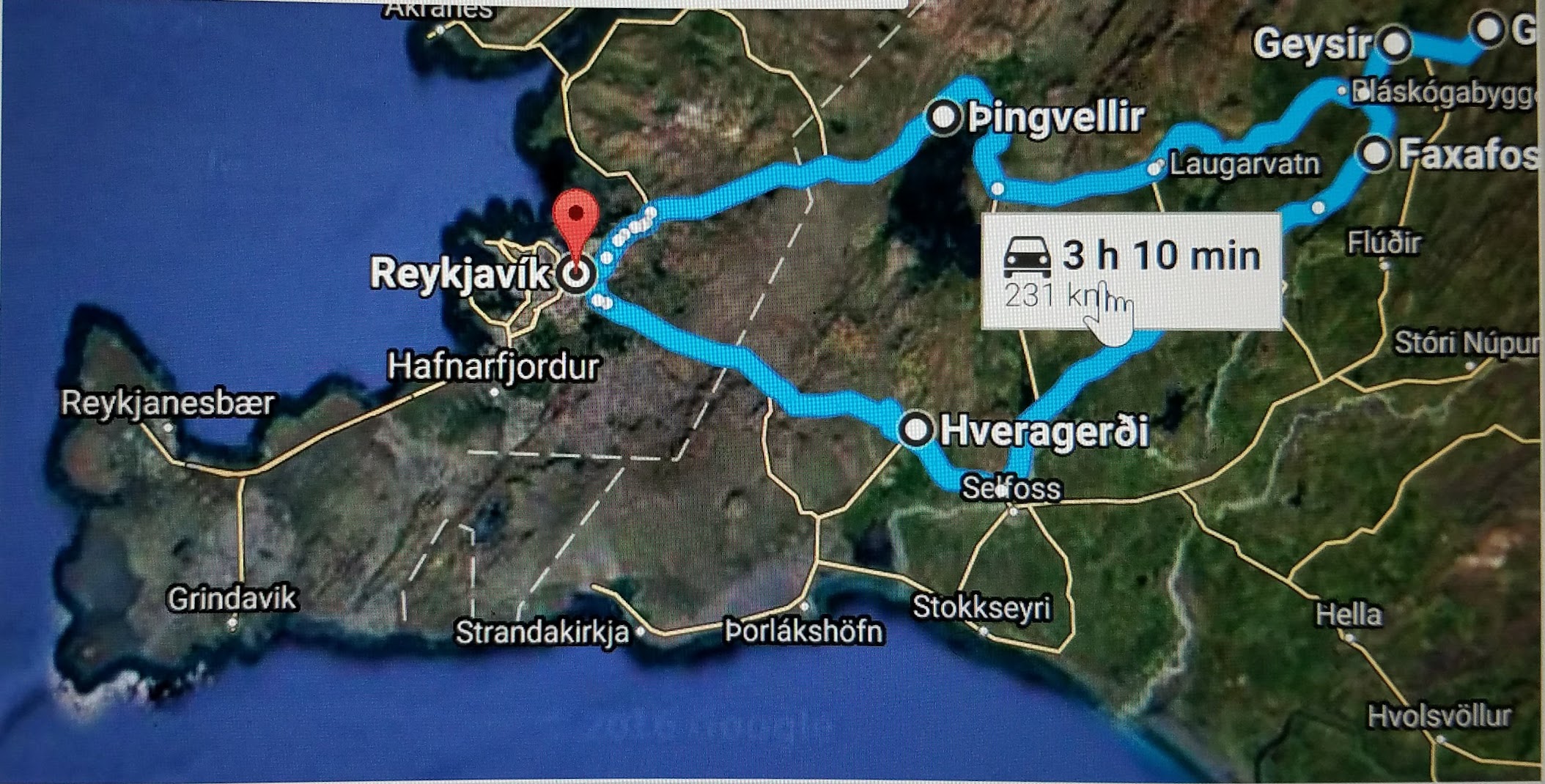 Map of the GeoIceland Golden Circle Tour route in Iceland. With stops, our tour lasted about 8 and a half hours.

One highlight of our trip to Iceland was GeoIceland’s Golden Circle Tour. I don’t like to drive. Mr. Excitement, my traveling companion (through life and on the road), doesn’t like to drive when he wants to be able to look at the scenery. Both of us prefer to limit the opportunities for marital discord about directions marring our sojourn.

Whereas the word “tour” has some dismayed, seasoned travelers heading for the hills in their own or rented vehicles, we have become fans of small group tours. When I could not find any multi-day tours that fit our Iceland travel schedule, we opted for three, small group, day tours with GeoIceland from Reykjavik, Iceland’s capital city. 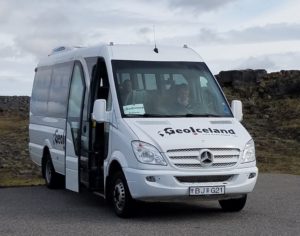 Our GeoIceland mini-bus for the Golden Circle Route Tour.

GeoIceland’s operation is efficient, but laid back. They use 18 person minibuses. Booking is done on line and no payment is due until the day of the tour. We received a 10 percent discount for booking three tours with them. We were given a half hour pick-up window and were picked up at our accommodation in Reykjavik.

The tour was properly paced with adequate bathroom breaks and a lunch stop. We packed our own sandwiches for lunch, having read that food options were limited and expensive during the tours.

Two of our GeoIceland guides spoke better English than I do, and the third spoke more than adequate English. All were friendly and happy to answer questions.

When and How to Visit Iceland

While tourism is now a year round business in Iceland, not surprisingly, many people choose to visit during the warmer summer months. I think we had a better experience without the extreme crowds of summer.

We added our seven day stopover in Iceland as part of an Iceland Air itinerary allowing travelers to add up to a seven day visit to Iceland either going or coming on Iceland Air between the United States and Europe.

What to Pack for a September Visit to Iceland

For the most part, I brought the right clothes for our tours: long pants, long sleeves, a fleece vest and jacket, and a waterproof windbreaker.

We did our walking in sneakers. It would have been nice to have had waterproof footwear and even waterproof pants, but I wanted to limit myself to a 20 inch suitcase for my 14 day trip. Those visitors who plan to do serious hiking in Iceland definitely need to bring these items. The main word to keep in mind about Icelandic weather is “changeable”, very changeable.

GeoIceland is an aptly named tour company because one of the most impressive aspects of a visit to Iceland is its geology.

In geologic time, Iceland is a young island. It appeared above the surface of the north Atlantic Ocean a mere 20 million years ago—give or take a few. Iceland was, and continues to be, formed by volcanic activity between the North Atlantic and Eurasian tectonic plates. These plates are diverging (pulling apart) on a line through Iceland from the southwest to northeast. This ongoing volatility just below the Arctic Circle produces spectacular scenery, the result of fire meeting ice.

Our first tour was the approximately 230 kilometer (143 miles) Golden Circle Tour, probably the most popular of the tour and self-drive routes from Reykjavik. Our GeoIceland tour required some walking over uneven surfaces, but nothing too strenuous.

Our first bathroom stop was at an exhibition/mini-mart in the town of Hveragerdi. People living in volcanically active Iceland know that the question isn’t whether they’ll experience a geological event, but when?

In 2008, Hveragerdi experienced a 6.3-6.6 magnitude earthquake. In rebuilding from the earthquake damage, a significant fissure in the earth was discovered beneath this site. The exhibition features firsthand accounts of that day, and thanks to a window in the floor, visitors can gaze down into the open fissure. In Iceland, visitors, like the locals, can only hope they aren’t in the wrong place at the wrong time when the earth shakes. A popular spot for salmon fishing, the Faxafoss waterfall on the Tungufljót River was our first stop on the Golden Circle Route.

When it comes to waterfalls, a picture is definitely worth a thousand words. Our first stop was Faxafoss, a waterfall which we found impressive—until our visit to the even more spectacular two tiered waterfall, Gullfoss, later in the day. The lower tier of the waterfall, Gulfoss, plunges into a canyon resulting from the Hvítá River being channeled into a lava crevice. In the 1970s, Gullfoss was saved from being harnessed for hydroelectric power and is now a protected part of Iceland’s natural patrimony. We joined the other soaked people waiting for the geyser, Strokker, to erupt, but our rain gear and umbrellas were no match for the downpour we encountered. No one can accurately predict the weather in Iceland, but sudden rain squalls were present every day we were there. What part of “geothermal” don’t you understand?

Our lunch stop was at the Haukadalur Geothermal Area, home of Geysir, the geyser that gave us the English word for this natural phenomenon.

Geysir has been mostly dormant since 1916, but steam rising from the ground and pools of boiling water give the area a premordial look.

Strokkor is a still active geyser within the park. We stood in the pouring rain with other hopefuls waiting for Strokker to erupt before deciding that having already had the privilege of seeing the eruptions of Old Faithful in Yellowstone Park in the United States and the geyser at Rotorua in New Zealand, we would wait for our tour mates in the Visitors’ Center gift shop/restaurant while sipping a warm beverage. 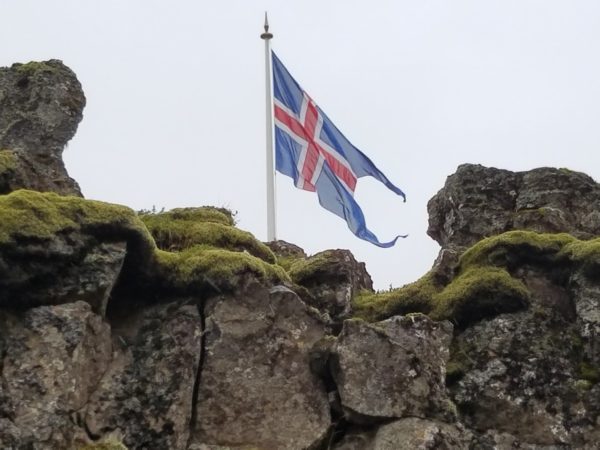 Our visit to Thingvellir National Park  indulged both my inner history and geology geeks simultaneously. Therefore, it was one of my favorite places in Iceland. (In Icelandic, the character “Þ” is pronounced like the “th” in English. Since I can pretty much only say one word in Icelandic (takk which means thank you), I’ll stick to the Anglicized spelling).

Geologically, Thingvellir National Park is the only place in the world where the divergence of the North American and Eurasian tectonic plates can be observed on land as a rift valley where new crust is formed by volcanic activity as the two plates pull apart. Mostly, the divergence is underwater as the Mid-Atlantic Ridge, the longest mountain range in the world. Maybe I’m overly  impressed by geologic phenomena, but the realization that I was standing at the eastern edge of the North American plate on the western edge of the rift valley gave me goosebumps.

The eastern edge of the North American tectonic plate at Thingvellir National Park in Iceland. Part of the eastern edge of the North American tectonic plate which runs along the western side of the rift valley at Thingvellir National Park.

The site earned its UNESCO World Heritage Site status because amidst the faults at the western edge of the rift are archaeological remains of where an open air parliamentary assembly, the Althing, took place annually from 930 to 1798. Iceland’s parliament is the oldest still existing in the world. (It is held in Reykjavik today). Thingvellir is considered the birthplace of the Icelandic nation.

I suspect I am the only person on the planet who has not watched even one second of Game of Thrones. However, those who do watch the series might recognize that scenes were filmed in Thingvellir National Park.

If you are adventuresome enough to want to snorkel or scuba dive in frigid glacial water (i.e. not Mr. and Mrs. Excitement), some tour companies can outfit you with the gear necessary to enter the apparently amazingly clear water of Thingvellir Lake to swim in underwater fissures caused by earthquakes between the tectonic plates. Lake Þingvallavatn, Iceland’s largest lake, fills part of the rift valley formed by the divergence of the North American and Eurasian tectonic plates. The frigid lake is popular with divers and snorkelers.

If you don’t do any other travel outside Reykjavik, the Golden Circle Tour is probably the route you would want to explore for a day.

Would you consider a trip to Iceland? If you have been, what was your favorite part of the trip?

Thanks so much for your post Suzanne, I am actually heading to Iceland with my friend next week and Golden Circle in on our internally as well, so I was thrilled to read all about it.

Have a wonderful time. You'll have even longer nights than we did, so I hope you'll see the Northern Lights.

What's a BedJet? If you want to get detailed, a BedJet is a "forced air cooling, heating, and climate comfort...