To gray or not to gray? Eventually most midlife women have to make the decision to dye or bite the bullet and go all gray. MB Sanok wrestles with this question. Read more from MB on her blog, Maple Brown Sugar. 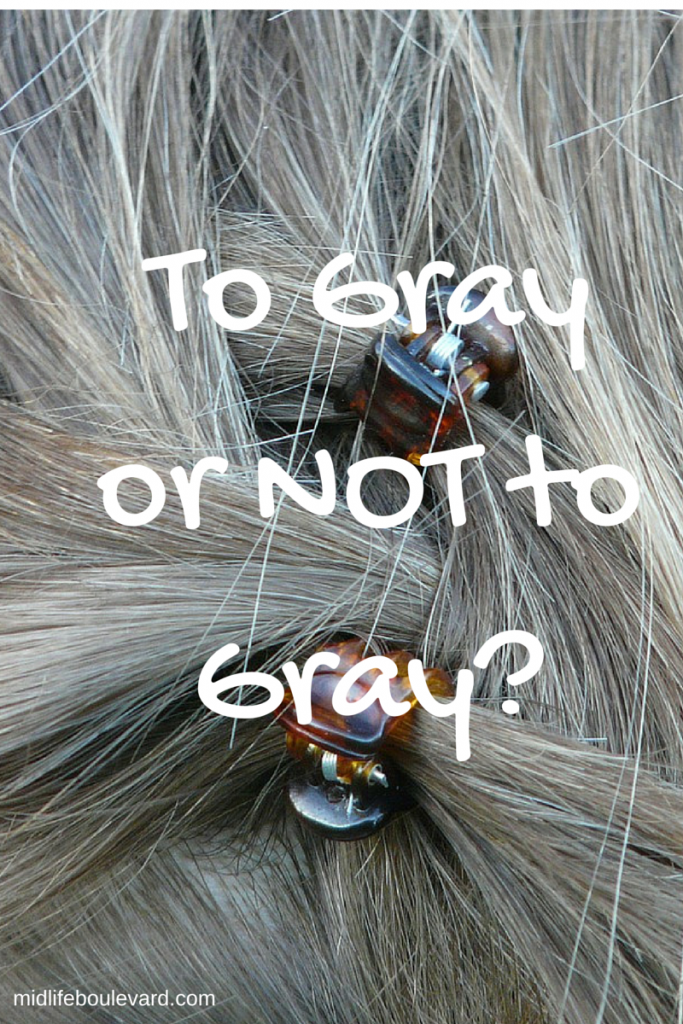 I saw this great picture on Facebook about going gray which I shared. Here’s what it said:

Those aren’t grey hairs, idiot, they are strands of GLITTER growing out of my head!

What a positive spin on spotting gray hairs and what to name them!  Thank you to the clever person who created this!

For the longest time, my hair retained its original blondish-brown color, darkening to a becoming chestnut.  My blond husband whose hair is slowly turning a sleek shade of silver (grrr!) favors brunettes, so he really liked the color of my hair.  I vowed to never change it in deference to his preferences even though I’d toyed for decades with the possibility of blond highlights.  Why upset my romantic life’s apple cart? So I resolved to leave it as is.

Like a party crasher, I discovered my first gray hair, just sticking out in the middle of my scalp with no warning or even an RSVP to the party I never wanted to have.  I examined it, not sure if it was gray or blond.  Many of my strands appear light, so I assumed they were blond and left them alone.  I wasn’t ready to admit the defeat of aging or satisfy my younger sister’s curiosity about the existence of gray hairs on my head.  Ever since my sister, who’s two years younger, found gray hairs poking out of her own head, I’d endure her roving hands and scrutinizing eyes, pawing through my hair to strike gray.  To no avail, she’d remove her hands, disgusted that, as the little sister, her hair was aging first.  People always assumed her to be the older one, anyway, since she towers over me by 3 inches (she’s fond of calling me shrimp) and always radiated more confidence than me. Secretly, I’d harbored a smidgen of glee that I’d been mistaken as the younger one.

As I calculated how old I was to go gray in comparison to my mom who shared the same hair color and texture, I realized she was older than me.  She started going gray in her early 40s; I was in my late 30s when the slow proliferation of grays showed.  Like my mom, my temples were the breeding ground which could stay hidden if I left my hair covering my ears instead of tucked behind them.

I wondered if rearing children really did bring out the gray? I’d given birth to my first child five years earlier than my mom and started going gray around five years earlier, too.  Could there be a correlation between kids, stress and gray hair? My mom endured a higher level of stress at that time than me — enduring cancer, the loss of her husband and raising two children alone. Even though I experienced my own challenges in raising my children, especially with my daughter who has special needs, it didn’t compare.  What would explain my sister going gray first when she is younger and didn’t have children or a husband at the time and lived a “swinging single” lifestyle?

My own paternal grandmother still had mostly brown hair in her late 80s when she died! Automatically, I assumed that my hair would pretty much gradually go gray with little to no fanfare at a late age, and people would comment how young I looked just by the color of my hair.

However, despite the cool, take-that-gray-hair! message I posted above, truthfully, I feel more like the old commercial saying that I’m going to wash that gray right out of my hair. It’s starting to bother me when I look in the mirror to see that my temples are almost entirely gray, seemingly overnight.  When I’d asked a hairdresser if I should start coloring the gray strands, she shook her head “no” which struck me as honest — wouldn’t she encourage me to color my hair, gaining another appointment, earning her more money for the additional dye job? So I continued to live the lie of seeing my hair as chestnut with blond highlights, instead of chestnut with silver tinsel at the temples.

But now I’m thinking it may be time to take matters into my own hands — literally.  No, not plucking — I falsely followed that old wives’ tale for all the brown hair preservation it allowed.  Like my mom before me, I may treat my temples to some good old hair dye and hide behind the chestnut curtain.  I’ve never colored my hair — even using lemon juice so sparingly that you couldn’t even classify that as a dye job.

Then again, maybe a little glitter would do me some good.  Instead of hiding behind brown, maybe it’s time to go for the gold and get those blond highlights because that’s probably as close to glitter as I’m going to get.

My gray is coming in faster than ever...still coloring, though, at least for now.

I always wondered if my gray started spreading because I plucked a few stray ones in the very beginning.

I saw that thing recently on facebook about the strands being glitter and love it! When I hit 41 I noticed more gray - especially at the sides by my ears. I tried doing just the root touch up to match my hair for a while and then even did a full color a couple of times. What I noticed is it is very hard on your hair and my hair started breaking a lot. I quit doing it - I would rather be gray than bald! Since I quit doing the dye - over a year ago - I was using coconut oil on my hair and it really lightened a lot this past summer - did not remove gray but changed the color - even my hair stylist wanted to know if I was coloring it and I told her no.

Wow! That's interesting! I didn't realize coconut oil could do that to your hair. Maybe it would work for me as a brunette. I do worry that dying it will be too harsh for my hair even though my hair is thick and pretty strong. I wouldn't want it to start falling out!

My hair is very dark brown (my kids would say black but it is dark, dark brown) and so the gray does show. I'm at the stage where I'm just plucking a few out as I find them. Not sure what I'll decide when that will no longer work as an option.

It's a hard decision to make. Sometimes, it seems like just one more thing to add to the list of maintenance and hygiene.

My sister found my first gray hair on my 30th birthday. The next day I went blonde. After a few fun years as a blonde I went back to red (my natural color) A few months ahp I complained to my stylist that my color wasn't lasting. She suggested I go darker. We are still experimenting with the right mix but so far I'm liking the dark. As long as I can drag myself to the salon I will not be gray and I suppose when I can't drag myself I will color at home.

It probably is fun to experiment with the different colors! I would even consider dying my hair pink, but could I go to that extreme? I never colored my hair -- ever -- but never say never.

My husband and I discuss this a bit, especially when I"m about to go get my hair highlighted. I have only colored my hair off and on over the years, but when my hair started graying I decided to make it routine to get it done. I have quite a bit of gray now, and I can't seem to want to walk away from coloring it, but my husband keeps encouraging me to let it go gray. Hmm...we'll see!

I'll be interested to hear what you decide. I'd definitely go blond, but my husband likes brunettes! Ombre has been on my mind, too!