I was puzzled by the muffled “thump” as my club suddenly stopped short. I’d definitely made contact with something other than my golf ball. Balls don’t scream, “Oh my God!” But men who have been hit between the legs with a nine-iron do. On the plus side I did remember to shout “fore” before I nailed him. Too bad the dummy wasn’t listening.

As he fell to his knees his eyes rolled back like a shark in a feeding frenzy. Stunned I dropped to the ground, extending my hand to comfort him, but was quickly met with an agonized, “Don’t you dare touch me!”

What had I done? Would my golf career be snuffed out before it even started? Would I be charged with assault and battery with a deadly weapon? 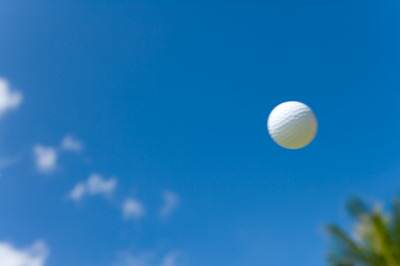 I was taking golf class at the suggestion of my desperate counselor who had advised me to consider a sport that didn’t involve the possibility of loss of life or limb as tennis had proved nearly fatal. It was supposed to be one of those so-called life sports that I could play till I was ninety. I could see myself in Miami Beach, pushing my walker out onto the links, dragging my heavy putter behind.

“You’re hot today, Ma’am!” my young, good-looking caddie, Ramone would compliment as I swatted at my ball, clad in thick trifocals and orthopedic stockings.

That first day I couldn’t wait to get a club in my hands and shout, “fore.” I was sorely disappointed the clubs wouldn’t come for three more weeks, until then the weapon of choice for us swingers– bath towels. Yes, as stupid as that sounds that’s exactly what we got. Bath towels. Deflated, I did as instructed swinging that towel like an idiot. I felt like a windmill in a vegetable patch. To the annoyance of my coach I still yelled “fore” every time just to feel like I was golfing.

The disgusted looks my fellow classmates and I exchanged told me that I wasn’t the only one who felt ridiculous standing in the former cornfield in full rotary position, fluffy white towels flying overhead as Coach directed us from the comfort of his lounge chair.

As always, bad form and disasters go hand in hand with me and it wasn’t long before my towel went sailing, landing on some guy’s head two windmills down. It was true I had been trying for weeks to meet Steve, but this wasn’t quite what I had in mind.

“I see your swing is getting better,” he laughed.

“I don’t know about that, but I’m getting better at snapping towels in the locker room,” I replied.

After three weeks as promised, we received our clubs. I wish I could say it was uneventful, but that would be a lie. I imagined myself as the next Nancy Lopez confidently grabbing my nine-iron and assuming the “official” stance position. I addressed my ball, “Hello, ball,” and took a swing. Looking upwards to watch my ball fly through the air I was surprised that it still sitting comfortably on the tee.

“I see you are having problems making contact with your ball,” the coach remarked. “Remember swing your arms like a Ferris wheel.”

I rolled my eyes and pressed on, but after many horrible attempts my ball remained stubbornly on the tee, though I had managed to dig several nice sized divots.

“Looks like you’re about to plant some tomatoes there.”

“I’ll hit it this time,” I replied, determined.

I planted my feet firmly and swung.

I watched as my ball cruised towards the lake before suddenly taking a left into the faculty parking lot.

“Coach said I hooked it,” I later explained to the Dean hoping he’d be more impressed with my official golf jargon than the cracked windshield. He wasn’t.

The coach made sure the following day that I was able to concentrate fully on my drive which I attributed to the relocation of the driving range to the other side of campus. Club in hand, I stood firmly and positioned my body in full-rotary, windmill stance and let her rip.

Rule number one on Coach’s safety and etiquette “No-No” list. Never, ever walk in front of a golfer while he’s addressing his ball. Poor Steve dropped like a rock before rolling into a fetal position as Coach yelled for a stretcher.

Later that afternoon there was talk of nothing else, “Did ya hear? Some ditsy blonde clubbed a guy to death with a nine iron in golf class. Had to remove him on a stretcher,” I overheard a group of laughing students say as I sat hiding in a corner booth in the cafeteria.

“I was only trying to hit the ball,” I said later to my roomy.

“You hit the ball alright,” she laughed. “Too bad it was a “Steve” instead of a “Slazenger”.

“I thought about calling him. But what could I say? Hallmark doesn’t make a card for an occasion such as this, “Sorry I laid you out with a nine iron.”

“I heard he was coming over to ask you out,” she continued popping fry into her mouth.

“Terrific,” I said, picturing him with his groin in a sling and wondering how I’d made such a mess of my life at the age of nineteen.

The following Monday everyone showed up for class except Steve who was still slightly incapacitated. I thought things couldn’t get much worse, but they did.

“Protective cups, Coach?” somebody laughed as he tossed a few of them to the guys as a joke.

I died a thousand deaths. Maybe two, especially when Coach separated the girls from the guys on the driving range. Nothing like singlehandedly creating a class policy in a day.

Steve and I eventually went on that date. For the first time in my life, Daddy told me not to worry about my curfew. He proclaimed Steve harmless or as he put it, “fixed– for life.”

Georgia Mellie Justad’s humorous writings have appeared in The Storyteller, ParentingPlus, and Dew on the Kudzu and is a contributor to the upcoming anthology, Not Your Mother’s Book …on Being a Mom, as well as numerous other publications. A transplanted Southern belle, she now resides in South Florida or what she fondly calls, “The Land of the Southern Impaired” with her husband and son. When she's not writing she works as a teaching artist specializing in arts integration. Visit her at <a href="http://www.posumqueenscene.wordpress.com">Possum Queen Scene</a>

Georgia Mellie Justad’s humorous writings have appeared in The Storyteller, ParentingPlus, and Dew on the Kudzu and is a contributor to the upcoming anthology, Not Your Mother’s Book …on Being a Mom, as well as numerous other publications. A transplanted Southern belle, she now resides in South Florida or what she fondly calls, “The Land of the Southern Impaired” with her husband and son. When she's not writing she works as a teaching artist specializing in arts integration. Visit her at Possum Queen Scene

Wasn't it just yesterday that he was three-years-old, donning a costume and zipping around our house as the cutest caped-crusader ever? Wasn't...