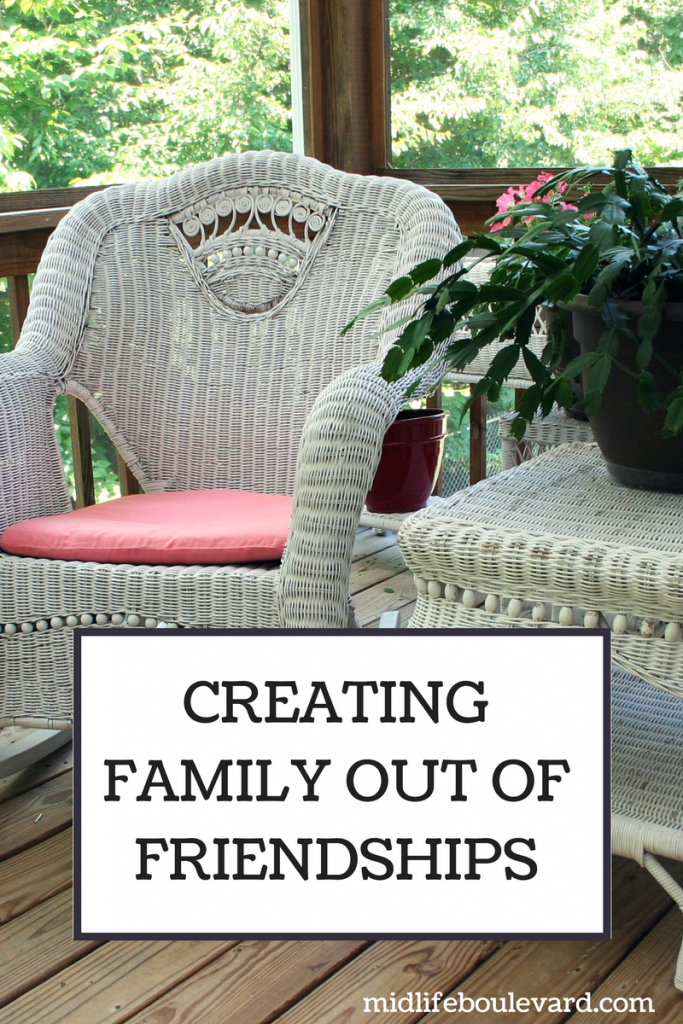 Barbara Hammond can be found sharing tales of her life on Zero to 60 and Beyond. Join her on her adventure and stop over there to say hi! But not before you read up on how she unexpectedly established an extended family.

I’m sitting here on the porch of our old house. I’m on the downstairs porch where our friends live. It still feels like home to me because we are, in the true meaning of the word, family.

Going Back A Bit: Finding Our Place

I will never forget the phone call from our realtor when we found out there was a house we could afford to buy in our favorite beach town, Ocean City, NJ.

In the beginning, we had two toddlers and found a place behind Gillian’s Amusement Pier we could afford by sharing with two or three other couples for weekends. It was 1974 and it was heaven.

After a while, we convinced our babysitter to join us so we could go out for the evening. It was a great trade! That went on for a few years until Dave was transferred to Massachusetts.

Still, every summer we would rent a house for two weeks and make the drive from wherever we were, which included several years in Pittsburgh. It was worth it, to us, because OC was our summer home. Period. There’s a reason it is called America’s Greatest Family Resort and was named the best beach for families this year by Coastal Living.

When we ended up back in the Philadelphia area in the ‘90’s I was convinced we would be able to buy a house in O.C. Dave never believed it would happen. He was wrong.

Back to that phone call when we discovered there was a house we could afford:

“I’m calling to tell you it’s your lucky day!”

Well, that wasn’t exactly what I was expecting to hear but, I knew where he was going with that news.

Sure enough, there was a duplex right in the heart of our favorite part of town and the man who was renovating it for the owner passed away suddenly. You can even head to my blog to read about how we had to have an exorcism to actually remove him, spirit and all.

We could continue the renovations ourselves and rent out the other unit which made it all affordable. We were so excited!

Life As A Landlord

After the first season of renting, we decided we didn’t enjoy being the landlords as much as we expected to. When you live upstairs from the renters and they know you own the place you suddenly become their personal concierge.

There was the young couple who were renting with us came upstairs to ask what they should do for the day because it was raining. Seriously.

Then there was the woman who motioned me over to the porch, as I set out to walk the dogs, to inform me the ‘cleaning people’ hadn’t done a very good job. Well, WE were the cleaning people! She was complaining about sand in the windowsills. Puhleez! It’s the beach! Sand is supposed to be everywhere.

So we weren’t totally happy with our decision to be landlords after the first season but weren’t sure what we should do.

A neighbor offered up some insight and asked why we didn’t “condo it?” – I’d never heard of this as an option and asked for more details. It turns out that information was pretty easy to access. New Jersey had a pretty simple way of going about the process, and it didn’t cost us a fortune. So we filed the paperwork and put the first floor on the market.

We had nibbles the first few months but no bites. I kept thinking positively while at the same time being scared to death we might get an offer from the woman who didn’t like sand at the beach. You really can’t turn down a viable offer in this sort of situation. It was disconcerting.

Then one day a lovely woman and her daughter came to see the house. Their realtor let them in and I stopped down to say hello. The daughter was high school age and was lying on the sofa watching TV while mom looked around.

When I came in mom gave a quick shout at her daughter to “Get off of the couch!”

I assured her I was fine with it and we chatted for a while. They had experienced the same anxiety we had about ever being able to afford a place in your favorite beach town and this one fit their bill.

It was a match made in heaven!

We became best beach buddies and that extended into winters, as well. I had the honor of doing the flowers for Lauren’s wedding years after the ‘get off the couch’ meeting and helped design a beach renewal for her mom and dad on their 25th anniversary.

Now, sitting here on the downstairs porch almost two years after we sold the upstairs and moved to Cape May, I find myself filled with emotion. But it’s all good. We get to come and hang out with the strangers who became our second family.