In the only picture I have of the day that I went to college, I’m holding a box of trash bags. Trash bags were my mother’s equivalent to the towel in The Hitchhiker’s Guide to the Galaxy, proof that you were prepared for any mess that needed to be cleaned up. Also, for a rain storm — cut a hole in the bottom for an instant poncho.  When setting out on any adventure, especially college, one wants to be prepared for messes and rainstorms.

I only went home three times that first semester. Once for Homecoming at Louisiana High School, once to see my brother playing Alfred P. Doolittle in My Fair Lady during his senior year, and once for Thanksgiving. For the second trip, I brought a friend from college.

In a letter I sent before the second trip, I helped my mother with food planning. 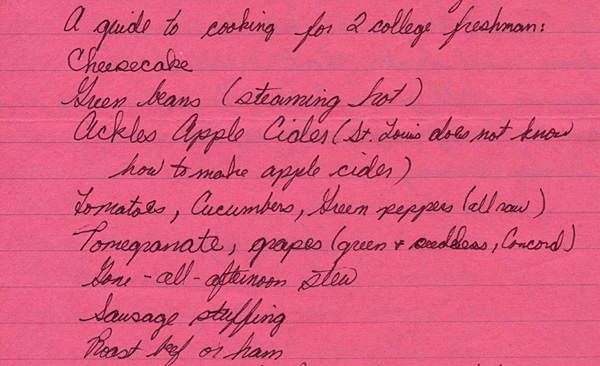 That sounds more demanding than it was. I was answering a question about what we wanted and, on the other side of the page, I told her not to worry if those things didn’t work out. I knew my audience. Dad would be amused at the specificity and Mother would find it easier to plan around a concrete list than vague generalities.

I’d forgotten about this list until I was reading the letters my mother saved.  But I remembered the green beans. My mother got a huge kick out of a request for steaming hot green beans and told that story many times over the years. These were the days before salad bars were ubiquitous. If I wanted veggies at college, my best bet was the warming table in the cafeteria where the green beans were lukewarm or cooler. As much as anything about home cooking, I missed that food in my mother’s house was served hot.

Fortunately, I can get real cider in St. Louis now. Back then, the bottle was labeled cider, but contained juice. Not at all the same thing when you’re used to cider fresh-pressed from the orchard.

Gone-all-afternoon stew was a favorite recipe of my mother’s from the days before slow cookers were popular.

What food did you miss from home when you moved out of your parents’ house for the first time?

Joy Weese Moll is a librarian and book blogger, reading and writing about health, cooking, gardening, memoir, and fiction.

Joy Weese Moll is a librarian and book blogger, reading and writing about health, cooking, gardening, memoir, and fiction.

My mother provided hot green beans when I came for the rest of her life -- even after I was cooking on my own and discovered that Farmers Market beans were so much better than the canned ones that she made!

I cooked with my mother often but when I first left home I wanted other food types I hadn't explored before. As soon as I started becoming homesick, I broke out some of mom's go to meals and felt much better..

Cooking your mother's meals sounds like a great cure for homesickness!

Try finding Asian food in a border town of Arizona. While I missed my Mom's cooking, I got spoiled by authentic Mexican cuisine. Can't go back to Taco Bell.

I am sure my friends whose children are going away to college this month will appreciate this post, Joy. I will share.

Asian food must be few and far between in that area. Cool that you mastered a new cuisine in college!

Joy, great article! When I moved away from home, I probably missed my mom's yeast rolls most of all. And truth be told, at the heart of it, I missed my family, and those rolls made me think of family!

Yeast rolls! That's a big thing to miss. My mother didn't bake, but I had an aunt who one blue ribbons for her yeast rolls. Just the smell of baking dough is enough to take me back to her kitchen.

This brings back a double load of memories for me - first, going home to my mom's great cooking after the mushy, tasteless meals at the university cafeteria, and later, buying the ingredients and preparing my daughter's favorite foods when they made a trrip home from university. A great post, thanks for the memories!

I'm glad that brought back memories from two times in your life. Favorite foods are a great part of the experience of going home.