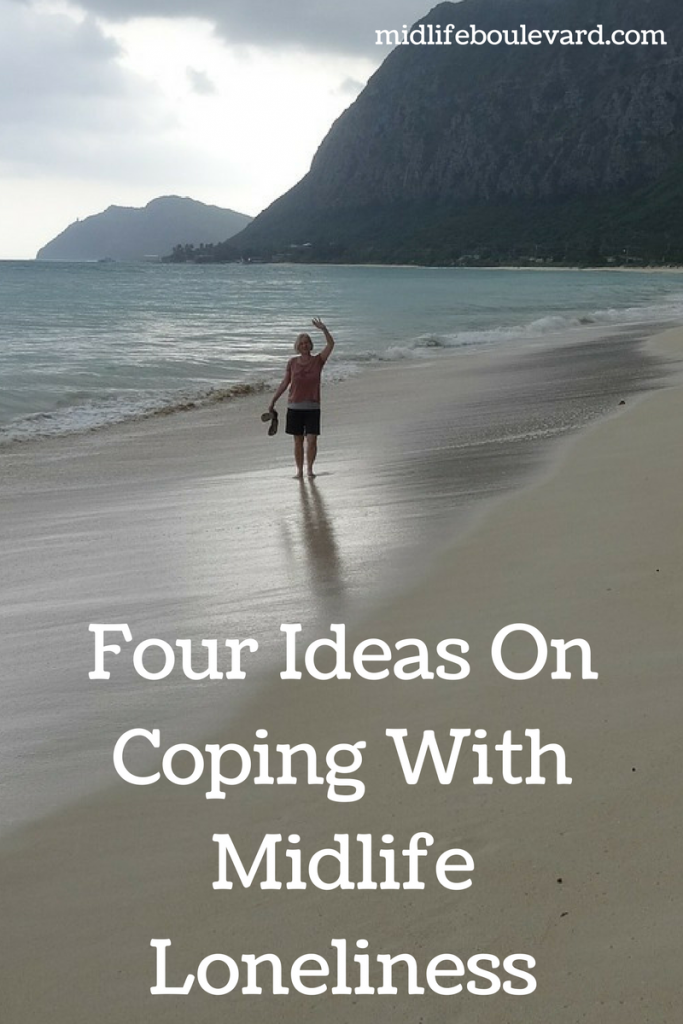 It can be a difficult part of midlife.

Whether it’s due to death, divorce, a conflict of some kind, or whether it’s a chronic state of being, felt from childhood, it’s tough. Loneliness can make your very soul ache.

I’ve often thought it should be a diagnosis in and of itself, because it can be so devastating. Loneliness isn’t a classic “symptom” of depression, but isolativeness is. Perhaps it’s semantics. Perhaps it’s due to the idea that the powers that be didn’t want to define depression as a relational problem. But the two are inextricably linked.

“I hate the weekends.”

“I see what my divorced friends go through. I’m staying married because I don’t want that to be me.”

Psychology Today had some interesting facts about loneliness. Around 60% of those reporting loneliness are married. Lonely people tend to be ostracized by others, so they feel even more lonely. People don’t want to “catch” loneliness, it would seem. People report feeling physically colder when they think of loneliness.

Of course, there’s a relationship between extroversion, introversion and loneliness. Extroverts enjoy being around people a great deal of the time. Introverts — not so much. Yet both varieties of people can be lonely,

“I can’t believe she’d leave me, when I’ve given her the best years of my life.”

“He’s already found someone else. Who’s going to want me at my age?

Loneliness in midlife is inextricably bonded with a fear of growing older, our culture’s stigma around aging, and walking that journey without a mate or perhaps, solid supportive friends.

Yet I have watched as women I’ve admired and loved very much did just that. My paternal grandmother was widowed in her mid 40’s. She never remarried and took over the business her husband had been running.

I met her third cousin, a woman I called “Et”, short for Ethel (a name she hated), when she was 84 and I was 24. We adored each other another 20 years. Yet her husband, son and one grandchild had already died. She carried on extremely well.

And I currently have an aunt whose husband died twenty years ago, who has kept on keeping on into her 90’s.

What have I learned from these incredible women?

1) Be careful. Anger can turn into bitterness.

Whether you’re alone due to your own choice or someone else’s, anger is a part of grief, and needs to be worked through. But continuing to be angry about being alone will hurt you, causing bitterness, and only make others uncomfortable around you. They will feel as if they’re disappointing or abandoning you, if busy with their own lives. You may tend to say things like, “It’s been so long since I’ve heard from you,” instead of, “I’m so glad to hear from you.” Those subtle differences make a difference for the listener, and they’re much more likely to want to connect.

Think about and then create a life that you’re curious about. Travel, learn a new skill, be involved in other’s lives. Another of my aunts learned how to rebind old books in her 70’s. I remember a picture of my grandmother on a camel in Egypt. That was in the 1960’s, when she was definitely an “older woman,” but she didn’t let not having a husband stop her from experiencing life. Don’t think about yourself as “too old” to do something.

If you live as if, in nine months or so, you might meet the partner you’d appreciate and find joy with — if you make the assumption it will happen — perhaps you can avoid the urgency that can take over and cause you to do things that are just that. Urgent. You’ll be creating the life you want. And guess who you might attract? Someone who wants a person who has a good life — who doesn’t need saving or rescuing.

3) Watch for a “third wheel” mentality.

People who don’t have a partner often say they don’t want to be around couples because they feel like a third wheel. I understand and highly respect the fact that engaging with others who have what you want, can be painful, and only highlight your aloneness. I well remember going through years of infertility treatment, and my struggle with others getting pregnant so easily. Yet the assumption of “I must be inferior because I’m not partnered” isn’t rational. There’s a balance there, between taking care of sadness you might experience, and not assuming inferiority or intrusiveness.

4) Don’t allow yourself to stigmatize aging, and yourself in the process.

When we say, “Who’s going to want me at this age?”, we’re showing that we’ve swallowed aging stigma hook, line and sinker. Of course, it exists. But we don’t have to egg it on by repeating it to ourselves, about ourselves.

If you’re in midlife, and you’re looking for a partner, claim the richness of your experience. Work on believing in what you have to offer. That attitude will shine, and will make not only friends want to be with you, but potential mates as well.

If you don’t know how to give yourself positive messages, then you can learn. It takes practice. It takes catching yourself when you’re about to beat yourself over the head with a psychological hammer. Then you stop, and practice saying something positive instead. You may have to practice — a lot. But you can do it.

Definitely can understand how loneliness can creep in for a variety of reasons. Thanks for the great advice as always, Margaret.

Thank you Helene. I was reminded just last night of the importance of connection -- of someone else touching your life in a real way. There's nothing like it. So appreciate the comment!

I was recently the guest of Kia Motors at the #DiscoverCadenza press event to experience the 2017 Kia Cadenza. I...