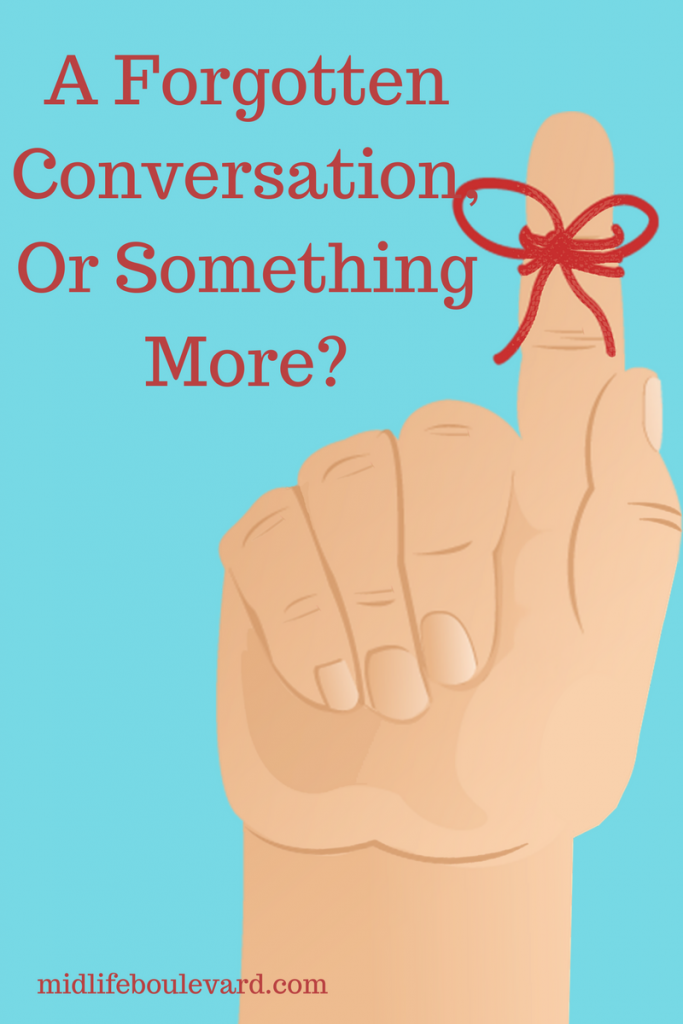 Roz Warren www.rosalindwarren.com is the author of Our Bodies, Our Shelves: Library Humor. This essay first ran on www.zestnow.com.
My friend Maria and I were going out to dinner.  Although we usually ate at an Indian restaurant near my house, she’d asked a few days earlier if I’d be willing to try a new place. “I‘ll pick you up at five,” she said, “and give you a ride there.”
Maria always runs late, so I wasn’t expecting her at 5:00. But I was waiting by the door with my coat on at 5:10.
She didn’t turn up. By 5:20, I began to worry. Was she having car trouble? Stuck in traffic?
At 5:30 the phone rang. It was Maria. “I’m at the restaurant,” she said. “Where are you?”
“We agreed to try a new place,” I reminded her. “You said you were going to pick me up.”
“But we spoke after that,” she said.  “I told you that I wanted to stick with the Indian place after all, and we agreed to meet there.”
“No we didn’t,” I said. “That didn’t happen.”
Maria clearly remembers having that conversation. I don’t.
Which is disquieting, because given that we’re both in our 60s, it could be an early sign that one of us is getting senile.
Or not.
I recently left my boyfriend of 20 years after learning that he’d had a secret girlfriend on the side for the last decade, a discovery which made me feel as if the universe had gut-punched me. I am, to put it mildly, really stressed out. I’m not sleeping well. I’m very distracted. Although I’m 100% certain that Maria and I didn’t have that conversation, it’s possible that we did and I forgot.
It’s not dementia! I assure myself. It’s merely stress.
There’s another possible explanation. Maria has always been the most scatter-brained person I know. At the library where we both work she’s constantly misplacing things. Paperwork. Books. Sweaters. Snacks. If an item is clearly out of place, you can bring it to Maria who’ll say, “I’ve been looking all over for that!”
I once found a pot of flowers sitting on top of the drinking fountain. Sure enough, Maria had been interrupted while watering it, then forgotten all about it. A person who could do that could certainly imagine that she’d spoken to me when in fact she’d merely intended to.
So between the stress I’m under and Maria’s natural forgetfulness, the conversation that Maria remembers and I don’t could be no big deal.
But we’re both women in our 60s and a lapse that you can laugh off at 45 isn’t quite as funny at 65.
Debbie was a retired accountant in her 70s who used to volunteer at our library. She turned up twice a week for years to help lighten our load, and we loved having her there. Then she began to forget how to do routine tasks she’d always handled easily. Soon her work had to be re-checked. We had to take back most of the jobs she’d trusted her with. She was unable to learn anything new.
It finally got so bad that it couldn’t be ignored. When my supervisor phoned her son, he said, “We were expecting this call. She’s been like this for a while but we didn’t want to say anything, because she loves working at your library so much.”
The next time I saw Debbie, at the grocery store, she had an attendant with her and she didn’t recognize me.
At the restaurant, Maria and I laughed off what had happened and enjoyed our meal. We’re both upbeat, optimistic people, and we weren’t going to dwell on it, even if it was a little disquieting.
There‘s no mandatory retirement age at our library and we both enjoy our work. I often joke that my retirement plan is to work there until I drop. “You can say that I died doing what I loved,“ I say, “and scatter my ashes in the book drop.”
I hope that’s what happens, and not that I’ll continue to work until I hit a wall mentally and am no longer able to do my  job.
Maria and I both do what we can to stay sharp. Maria works out, and does crossword puzzles (especially during boring meetings) which keeps her brain challenged. I eat healthfully, get plenty of exercise, and trust that all the writing I do is good for my brain.
Maybe we’ll both live to 100, with all of our marbles. Maybe not. This  incident could be nothing. Or it be the small start of something really bleak for one of us. Maybe before one — or both– of us ends up with Alzheimer’s, there will be a cure. Maybe there won’t.
The only thing we can count on is that, if the worst does happen, we’ll be there for each other.  As long, that is, as we can remember who we are.

Stress makes you forgetful. I say with certainty no worries!

How to Break Out of a Fashion Rut