Can a relationship exist where both parties feel equally passionate about football AND fashion? Would it bring them closer??   I’m dying to find out!  With my two ex-husbands, I was constantly left alone on the sidelines during sports season, not to mention wandering solo through shopping malls because they couldn’t have cared less about what I wore.

But I’m determined to ‘weave’ together football and fashion ‘seamlessly’ with the great new man in my life. 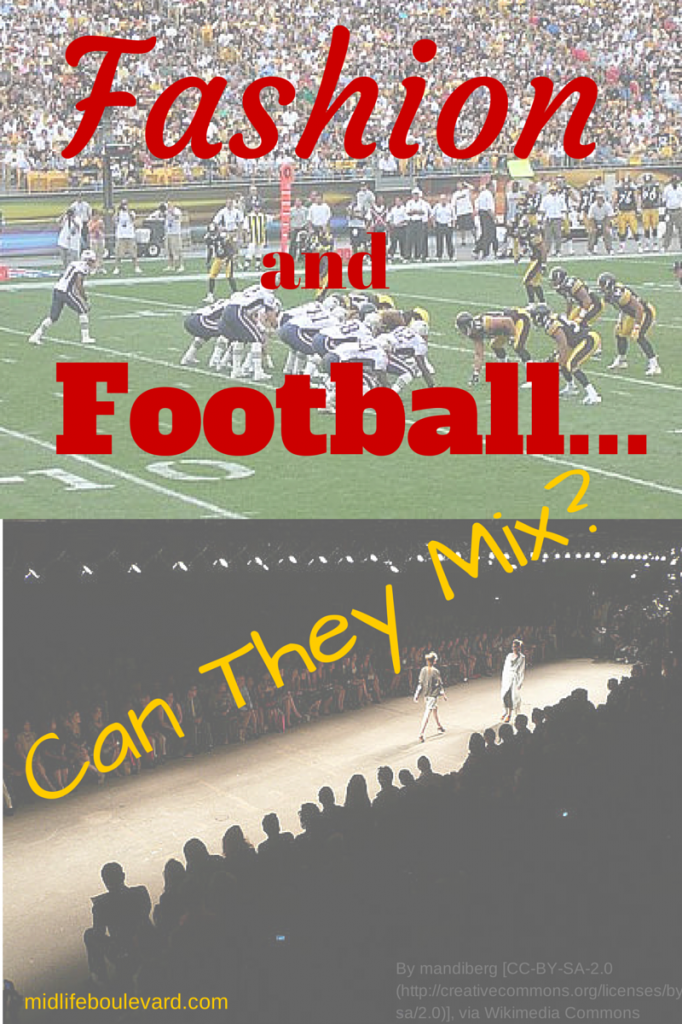 “You’d be amazed how much the two subjects have in common,” I gushed enthusiastically to my guy last night, as his eyes were riveted to the screen during Monday Night Football. I sat conspicuously nearby, turning the pages of a recent fashion spread in Vogue.

“Oh no! Look how she  FUMBLED  with her purse, searching for lipstick!” I shouted, pointing to a statuesque blonde on page 28. “Betcha never saw color-BLOCKING  like that before! I wonder how much  YARDAGE  of silk that took?”

He narrowed his eyes suspiciously, yawned, then promptly turned his attention back to the set.

One more time, giving it that old college try. . .

ME:  Well, whadya know! Vera Wang is finally gonna  TACKLE  the issue of  HIKING  up hemlines during the  KICKOFF  of her new fall line.

HIM:  Shhhh, Stephanie – – I can’t even hear the announcer.

A new tactic was definitely required. . .

ME: (cozying next to him and purring) Well hello there! Did you ever stop to wonder if their team jerseys are made of 100% pure jersey knit? Or do they sneak a little Lycra in there?

Six men smashed their bodies together and I winced.

ME:  What daring trendsetters those brutes are – – bringing back the 80’s shoulder pads like that! I think the chinstrap could be a bit much though. A simple helmet would streamline their look, while still accessorizing those head concussions perfectly. And whoever does their make-up! Haven’t they heard of waterproof mascara? It’d prevent those under-eye black marks.

HIM:  (looks at watch)  Isn’t there some fashion show luncheon thing at Nordstrom, starting right about now?

ME: (coyly)  Why? Would you accompany me to it, Coach?

ME:  Shhhh, I can’t even hear that official man in the black and white stripes, blowing his sterling silver whistle necklace. Didn’t anyone tell him pinstripes are so yesterday? And white pants after Labor Day! Seriously? That’s a makeover just waiting to happen.

I made lots of loud tsk-tsk sounds.

Just then a Levi Jeans commercial flashed on — my hopes immediately renewed. But to my surprise I didn’t have to utter one word to get him engrossed.

“Hey, I’d sure like to  HAND-OFF  to that  TIGHT-END!”  He nodded approvingly at the backside of a gorgeous model, clad in size 2 slim fit jeans. We’d  HUDDLE  together and talk about our next big  PLAY  – – then I’d make a smooth as satin (or should that be 100% silk?) PASS at her.  Mmm, those little stitched back-pockets would put me into  OVERTIME  for sure.”

“Uh Listen, I’ve been thinking.” I stammered, abruptly changing the channel. “Separate interests are actually super healthy for couples. It gives them a sense of independence and brings variety to their relationship. A nice balance, if you will. No sense in both people liking the same thing.”

“I thought you might see it that way,” he said with a knowing smirk. “So next time you’ll be more careful what you wish for?”

Sheesh, this guy really gets into teaching someone a valuable lesson, doesn’t he?
Before I responded, I leaned over to grab my Kate Spade purse, which I then launched (with a perfect spiral!) across the living room, where it landed in the center of the coffee table.

“Uh, whaddya chuck your handbag for?” he asked incredulously.

“Just demonstrating I can throw a winning “CLUTCHDOWN”  pass better than any San Diego Charger quarterback around,” I smiled smugly.

Then he slapped me hard on the behind as I complimented his Christian Dior-DiScore shirt, his Calvin (K)Line-backer pants, and his Bill Blass n’ Pass shoes.

And that was the end of Football versus Fashion week.  Tied score.  We’ll see who goes to the play-offs.

I am holding out for a 'fantasy make up' league.

Makeup and Basketball? Nah, they're always 'dribbling' all over each other....it would never work. Thanks for commenting!

I should try the Clutchdown one of these days, just for fun! ;-) LOL!

Gives new meaning to "Scoring a new purse at Nordy's!" Thanks Joy.