So a man boards his El Al flight from New York to Tel Aviv, but when he sees that Elana Sztokman is in the seat adjacent to his, he refuses to sit next to her.

Was she holding a howling baby? Did she have a hacking cough? Ebola, maybe?

No. The problem, simply, was that she was a she. 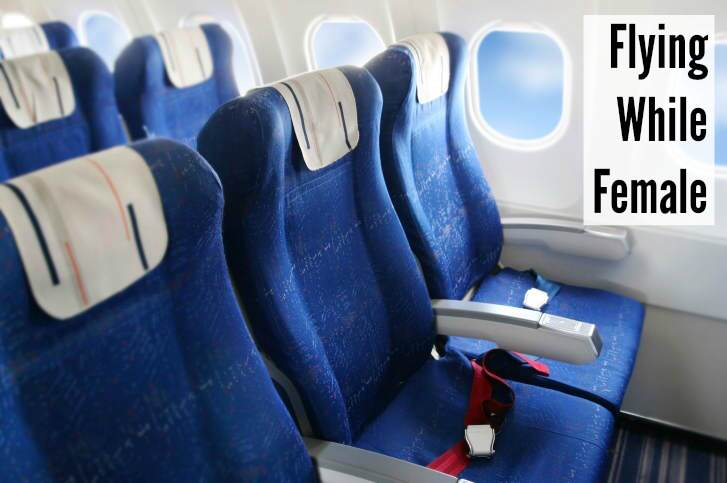 The man, an ultra-religious Orthodox Jew, was so certain that God didn’t want him to sit beside a woman that he demanded a seat change. Other Orthodox men onboard took up his cause, and the ensuing brouhaha delayed take-off until, finally, another seat could be found for him.

Sztokman just happens to be the author of a new book, “The War On Women In Israel: A Story of Religious Radicalism and the Women Fighting For Freedom” in which she calls for an end to “the religious extremism that is hurting women” in that country.

Proving? God, if he does exist, has a sense of humor. Or, at the very least, a deep sense of irony.

The outraged essay that Sztokman wrote about the incident quickly went viral.

Will this help Sztokman sell books?

I certainly hope so.

Seating flaps like this aren’t unusual for El Al. It happens often enough that instituting gender-segregated seating on their planes has been discussed.

And playing musical chairs with airplane seats, of course, is nothing new. It usually results when families who have been assigned seats all over the plane actually want to sit together. But seat shifting happens for other reasons too. To maximize leg room. To move away from a bathroom.

I’ve quietly asked the flight attendant for a seat change when seated beside a woman so obese she was crowding me out of my seat. Or in front of a child who kept kicking my seatback. Flight attendants, I’ve found, will try to accommodate you if you’ve got a reasonable request.

But was this man’s request reasonable?

Sztokman didn’t think so. “What offends me,” she wrote, “is the premise that sitting next to me is a problem…. After all, I had just spoken [on a book tour] to hundreds of people about exactly these issues and the way women are made to feel like second-class citizens as a result.”

My Facebook pals didn’t think so either, based on their comments when I shared her essay:

“Shame on him for his lack of understanding and rigid misinterpretation of archaic rules.”

“He needs a private jet to control his flying environment but I guess it’s easier to try to control women.”

“Let him sit in the bathroom where he can be alone with his deep thoughts.”

“Maybe he should fly alone. Like take a flying leap!”

As a single woman who usually flies alone,  I’d rather sit next to a woman than a man, because women don’t hog the armrests. But when I find myself seated next to a guy, I don’t demand to be moved.

But then, for me, it’s a question of comfort, not one of religious belief.

So where does it end? One section for religious men. Another for religious women. Well then, how about another section for secular humanist Jews like me, where we can nosh our non-kosher snacks and read the New York Times in peace?

What about a section for anyone traveling with a screaming baby? Or a really bad cold? A section for fat flyers? And one more for folks who plan to feast on pungent food?

A section for introverts only, to ensure that they won’t have to talk to each other?<

A window-shades-closed section for travelers who want to nap through the flight?

A section for white-knuckled flyers, with special “This Plane Is Safe And Will Not Crash” affirmations printed on the seat-back cards?

And why not a special section for those restless flyers who bounce up every five minutes to stretch their legs, visit the bathroom, and  schmooze with the flight attendants?

But this, “Woman, begone!” idea is way different from a more benign preference (like not wanting to sit near a bathroom.) It’s a serious attack on women’s hard-won right to equality in public accommodations. Travelers who see the entire female sex as “other” — beings too alien to sit in the next seat — should not get their way. We need to follow Szotkman’s lead in standing up for every woman’s right to ordinary, taken-for-granted equality in normal public life. To give a religious reason for the disdain, as Sztokman writes, “doesn’t excuse the insult.”

Seeking a reality check, I spoke with a friend who is a Professor of Jewish Studies with Orthodox rabbinic ordination, who assured me that the vast majority of men in the modern Orthodox world have no problem working with women and interacting with them on a regular basis, including in flight.

El Al, I trust, will eventually get this all sorted out. Either that or people  will begin to behave in the tolerant, kind way that most religions, when not taken to fanatical extremes, encourage them to.

In the meantime, I’ve got an idea. Feminist airlines! The very first airline to fly in accordance with feminist values. Every passenger will be considered equal and worthy, and all will be expected to treat each other with consideration and kindness. (And, of course, Gloria Steinem always flies for free.)

Fly the feminist skies with me, Elana! I’ll see you at the airport.