When it comes to broadcast television right now, there’s so little to watch. We’re bored. The Olympics has ended. At this point good shows to watch on TV will be slim-pickins until the networks roll out their new shows and old favorites for the fall season. I have a few shows on Netflix to tide you over until fall television begins. 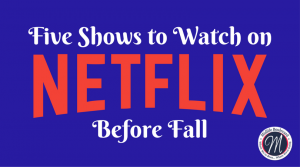 5 of my favorite shows on Netflix

Narcos is the story DEA agents who are pursuing notorious drug Kingpin Pablo Escobar (Wagner Moura) in 1970’s & 80’s Columbia. Cocaine has become the drug of choice in the US and no matter what DEA Agents Murphy (Boyd Holbrook) & Pena (Pedro Pascal) do, Escobar’s empire keeps growing. Another great period piece with well-developed characters and addicting storyline.

Bloodline is a family drama starring hunky Kyle Chandler (Friday Night Lights) as Det. John Rayburn. Rayburn is one of four siblings in a prominent family in this small Florida Keys town. Things are going along just fine until his black sheep brother, played by Ben Mendelsohn comes back, dredging up hidden family secrets and wreaking havoc in the lives of the Rayburn siblings. Also starring Cissy Spacek and Sam Shepard as the matriarch and patriarch of this dysfunctional family.

Flaked is a quirky dramedy starring Will Arnett (Arrested Development) set in Venice, California. It’s the story of Chip, a recovering alcoholic living in this surfer-type town. He and his friends wrestle with their pasts, romantic triangles, and recovery. I found this series both funny and endearing.

Fundamentals of Caring is a movie, not a series. Paul Rudd stars as the main character, Ben. After a series of losses, Ben takes the job as a caregiver to 18-year-old Trevor who is confined to a wheelchair with Muscular Dystrophy. To broaden Trevor’s horizons, Ben takes him on a road trip, where they both grow, wrestle with their painful pasts and come home with a new sense of bravery and purpose.

There you have it. My five Netflix recommendations to hold you over til fall! What shows are you watching this summer?

Cathy blogs at MySideof50.com where she shares bits and pieces about her journey on this side of 50! This piece was originally featured there.

Cathy is a 50-something wife, mother and grandmother who is embracing new challenges and adventures at MySideOf50.com. Her motto is “BE BRAVE”. And that means putting herself out there, trying things that are fun, challenging and that may terrify her! She writes about new adventures and challenges on this side of 50. Things like caring for aging parents, relationships with adult children, health issues and retirement. Cathy also writes about new adventures – like traveling, learning to do new things, and whatever else life throws her way.

Panting To The Oldies

Camille DeFer Thompson can be found sharing on her website of the same name. This post was originally featured there. I...