Back when I was in elementary school we were taught that ducking under our desks would save us from an atom bomb and that Christopher Columbus discovered America. It wasn’t until Mr. Excitement and I visited Ireland and Denmark that I learned the real Vikings (not the Minnesota football team) sailed across the north Atlantic in long boats from Iceland in the 980’s, beating Christopher Columbus to the New World by over 500 years.

Then there’s that unfortunate raping, pillaging and burning thing.

Learning About the Real Vikings

On a European trip that included visits to the Republic of Ireland and Copenhagen, Denmark, I learned that one of the things they have in common is the real Vikings.

Although I went to law school to learn a trade, I retained my fascination with the past that made me a history major in college.

When we think about Irish history (which I mostly do when I’m actually in Ireland), it’s a lot about the well-earned Irish antipathy toward the British. It turns out that in 1167 (or thereabouts), an Irish chieftain (Diarmait Mac Murchada) asked Henry II of England to help him in a war he started by abducting another chieftain’s wife. (Note to chieftains: Do Not Mess With Other Chieftains’ Wives). 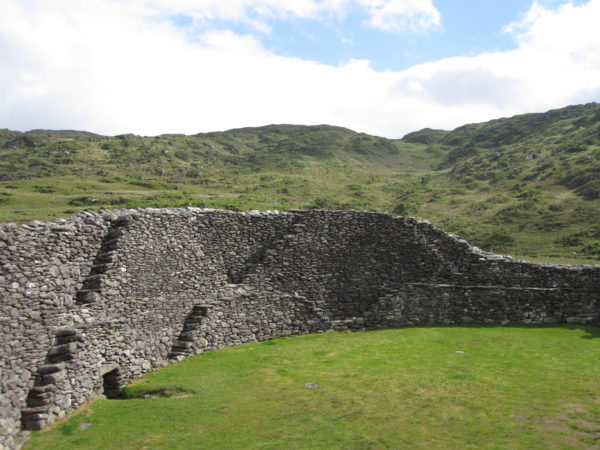 The Irish actually have a long history of having to defend themselves from invaders arriving by sea. This is the interior of the 5th century Staigue Ring Fort near Sneem on the Ring of Kerry in southwestern Ireland.

Henry II was otherwise engaged fighting somewhere in France, but he authorized Mac Murchada to hire some English mercenaries to assist him. Henry II was a Norman king of England; that is, he was descended from William the Conqueror of Normandy (in France) who defeated the Anglo-Saxons at the Battle of Hastings in 1066.  And, “Who were the Normans?”, you ask — none other than assimilated Vikings!

Apparently, the Anglo-Normans (i.e. the English) did not get the memo about mercenaries leaving when their services were no longer required. Fast forward through 755 years of Irish history and one gets the message that the British done them wrong and they have not gotten over it. 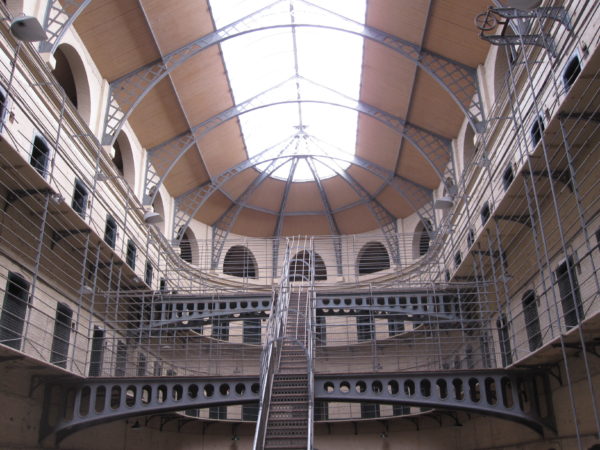 The “nice” part of the Kilmainham Gaol (Jail) in Dublin, Ireland where the English imprisoned many members of the movement for a free Irish Republic.

They were softened up, but only a tad, by a visit from Queen Elizabeth in 2012, the first visit by a British monarch since Irish independence in 1922. She even wore a green coat — with a matching green hat, no less.

The Real Vikings in Dublin, Ireland

During our visit to Dublin, we took a “history tour”. Our guide was a newly minted Ph.D. in Irish medieval history who was supplementing her waitress job earnings by giving walking history tours.

From her, we learned that before the British made Irish Catholic lives miserable for seven or so centuries, in 795 marauding Vikings first showed up doing their raping and pillaging thing through Ireland. 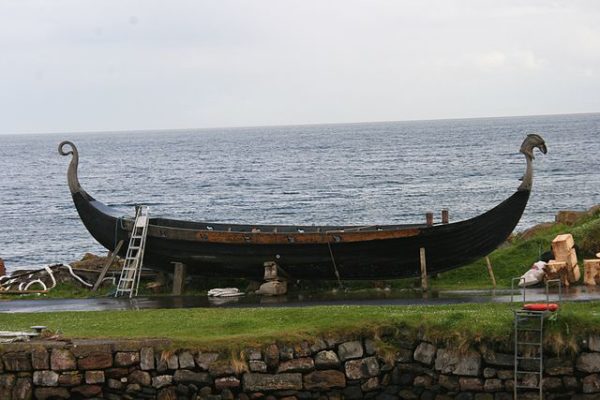 Recreation of a Viking longship of the type that would have carried marauding Vikings on their raids. (Photo credit: Mike Peel, C.C. lic. 4.0 International)

It was the Vikings who actually started the settlement at Dublin in 841 as a place to rest from their depredations. When we expressed  surprise at the Viking connection to Dublin, she told us she actually tones the Viking part down when there are Danes in her tour group because they have a tendency to become upset, to earnestly apologize, and to ask for forgiveness for the transgressions of their 1,200 plus years ago ancestors.

The Real Vikings in Denmark

With this background, we visited the Danish National Museum when we visited Copenhagen. We were looking forward to learning more abut the real Vikings.

We walked through room after room of excellently curated artifacts with comprehensive written explanations in Danish and English. We started with paleolithic Danish times (think cavemen) up through the Iron Age, and the Bronze Age.

We finally started getting Viking teasers, like bits of ancient ships, ship amulets, ship jewelry and ship carvings. We got it. Ships were very important to the real Vikings.

We finally arrived at a room that was actually labelled, “The Vikings”.  What, only one room? The bilingual written introduction to the room basically said something like:

Okay, so we know our forebears, the Vikings, did some really bad stuff, like raping, pillaging and burning throughout the known world, but they don’t get enough credit for the good things they did. Leif Erikson settled Greenland which, by the way, he named “Greenland” as a marketing ploy.

Apparently, the Vikings did not have truth in advertising laws. We left the Viking room feeling disappointed that this seemingly important period in Danish history had been glossed over.

On our way out, we decided to stop by the children’s wing of the Danish National Museum.  We were impressed. 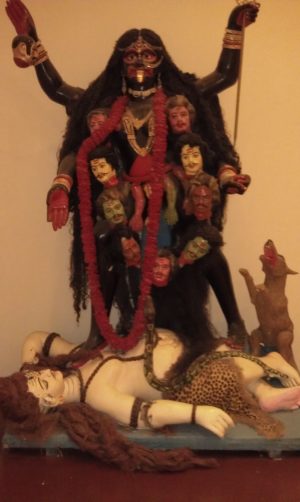 This is the scary Viking statue that greeted us next to the entrance to the Danish National Museum Children’s Wing.

It was a lovely children’s museum where tots can clamber around on a pretend Viking ship, drive a pretend tram, visit a pretend school, play pretend dress-up, buy spices in a pretend Pakistani bazaar, and other fun stuff our sons would have loved doing when they were children.

However, I’m not sure we would have taken them there because right smack at the entrance to the children’s museum was a greater than life size sculpture of a monster multi-armed real Viking, draped in trophy heads, stomping on a half naked pregnant woman.

Copenhagen was a bustling, multi-cultural, handsome city, but I’m thinking the Danish national psyche could use some therapy for their obvious Viking “issues”.

Never knew all this about the Vikings, to be honest... I've heard Copenhagen is a lovely place to visit, I might try it out next year :)

The statue that you saw at the entrance of the Danish National Museum Children’s Wing is the Goddess. I liked your post and all the photos.

What a hoot that statue is. That is what I would expect from a Vikings Museum, dash the Danes! I watch 'The Vikings' on TV.

My husband watches the Vikings. Too violent for me. Same reason I'm the only person in the world who has never watched Game of Thrones.

What Will You Remember From The Holidays?

I had the radio on while I was out yesterday, trying to stay afloat in the sea of holiday traffic....