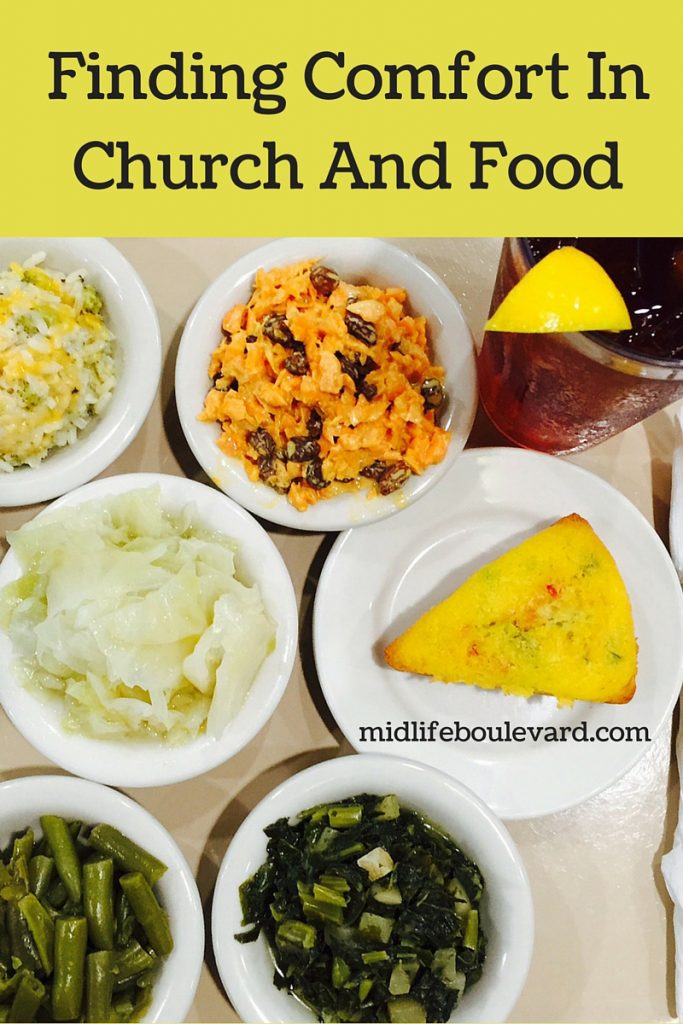 Right now it’s quite a brutal time for my hometown, Baton Rouge, and the rest of the nation. I have felt shock, anger, fear and hopelessness. Don’t get me wrong, I don’t in any way profess to have answers for all the problems of today. It’s been hard for me to find hope, but I felt it on Sunday. I felt that glimmer of hope—of future possibility—in places that have been a part of my Sundays my whole life. I found hope in church and at Piccadilly.

When I was a little girl, I did what many white families did after attending their Sunday service, we went to Piccadilly. Piccadilly is a Baton Rouge born cafeteria that specializes in southern-style, comfort food. As a child I was allowed to pick whatever I wanted; fried chicken, greens, deviled eggs, fried okra, cornbread and a slice of pecan pie. I learned the phrase, “your eyes are bigger than your stomach” from a Piccadilly meal. Families would go in their Sunday-go-to meeting clothes and white gloved, black waiters would carry our trays to our table, while a black man played the piano.

As an adult, I have learned how lucky I was to be raised in white privilege.

After the horrific week that my city experienced I felt a desperate need for comfort. My sweetie was raised Catholic, but I can bribe him to come with me to my church if I tell him we’re going to Piccadilly afterwards.

This Sunday may sound the same as my experience in the segregated southern town I grew up in, but a time traveler from 1966 who landed in 2016 would not recognize it. I drifted away from the Southern Baptist church I was raised in during my college years. As I got older, the answers it offered to life’s difficult questions no longer made sense to me. I found the Unitarian Church when I was expecting my biracial daughter. Her father is Chinese and Buddhist and many of her cousins are Muslim. It was important to me to find a faith community that worked for our family.

What I didn’t know when I joined 26 years ago, was the church’s history of social activism. The Baton Rouge church began in the turbulent 60’s when bus boycotts and downtown riots were happening. It was always a church where blacks and whites could worship and strive toward justice together. This was an idea that was so threatening to some that in the 60’s the church was visited by the KKK and told to stop. But the church didn’t stop and we still come together to strive for a more just world over 50 years later.

What I Do Today

After my spirit was comforted, I got my southern comfort food fix. I deluded myself into thinking I was eating healthy because I was just eating vegetables—cooked in butter and bacon—and I didn’t get that slice of pecan pie. We were in our Sunday best and I realized with a sip of sweet tea that Baton Rouge has changed so much since my childhood. As I savored the meal I realized the staff and patrons were a diverse group. Black and White and Hispanic and Asian working and eating side by side. We carry our own trays now and we break bread together, too. This simple thing, a diverse gathering of people eating and working together would have been impossible to imagine 50 years ago. The only thing I really miss is the piano.

I’ve heard over and over this week that things are worse than ever. But I realized at church and at Piccadilly that they are not. What has changed is technology. Because of videos, smartphones and social media, we are now seeing for the first time what has been happening all along. Many still delude themselves and want to blame the victim. It’s hard to change what you believe to be true.

I’m a bit of a Pollyanna, but I’m not naïve. I feel a glimmer of hope. We have moved forward. It’s a slow, painful and often brutal journey. As my minister said, I believe in a God that moves us towards justice. I have to believe that love and peace and justice will win the day.

I know, I always have to find a positive spin on things. My feeling of hopelessness comes when I can't see the light.

Piccadilly Cafeteria - haven't thought of that in years. We had those in Houston when I was growing up & I went often. Great food. I remember jello, and mile high chocolate or coconut cream pie and the best yeast rolls. Thankful that we do serve a God of justice in these times that we don't understand. Thanks for posting.

Yes, I have fallen back on the things in which I have found comfort my whole life, church and Piccadilly.

Publisher's note: Midlife Boulevard is thrilled to have Glenda K. Harrison on board to write about style. She'll be here...