Sydney Frymire took a midlife journey to Nepal that changed her life. Now, after the recent devastating earthquake, she needs help to rebuild the country she’s come to love. Read more about Sydney’s work on her blog. 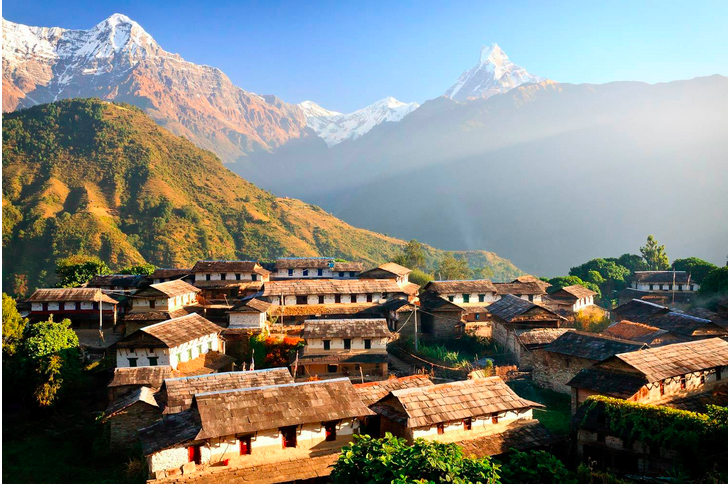 Since the earthquake left much of Nepal in ruins last month. I have anxiously awaited updates about a small group of children I know halfway around the world. These shy, friendly children, between 3-15 years old, attend Dadagaun Village school and 35 live in the orphanage. They became a part of my life since I began “voluntouring” in Nepal in 2011. According to news reports, it appears the people in this small community about 6 miles northwest of Kathmandu have escaped with their lives, but not much else.

Almost one-quarter of citizens in this ancient and mystical country live in relentless poverty. Many rural households have little or no access to primary health care, education, safe drinking water, or even basic sanitation. Nepalese parents, desperate for any means to subsist, can be duped into sending their children into servitude and bondage, believing false promises of education or steady work and good money to help both their child and the larger family. Abandoned or orphaned children are equally ripe targets for human trafficking. Following the earthquake in Haiti, UNICEF reported that thousands of children were being trafficked out of the country. Could the escalation of this scourge become an appalling consequence of Nepal’s earthquake?

While Dadagaun children are safe because they have the benefit of outside attention and funding that has blessed them, many others outside this community are at risk for trafficking. Poor education and limited economic opportunities feed vulnerability, particularly for Nepalese girls and women, who are estimated by the United Nations to have a literacy rate below 50% (2013). It is no surprise they make up the majority of trafficking victims who are abducted, sold or tricked into sex work and forced labor. Thousands disappear every year. Boys are trafficked most often for construction or factory labor, conned into believing it will be “migrant” work. Though Nepal has taken a hard line legislatively on trafficking, enforcement is erratic. On May 1st, encouragingly, the Uttar Pradesh government in Northern India warned of increased opportunities for trafficking and asked police to keep an eye on the notoriously porous Indo-Nepalese border.

The fight to protect vulnerable Nepalese from corrupt and malevolent traffickers begins on the ground and on these borders. Knowing many of the children — especially the orphans — of Dadagaun, I have witnessed how a little compassion and charity can change children’s lives cforever. Back in 2011, I became part of an ongoing effort, to volunteer time and money to improve educational opportunities and living conditions for these children.

My journey toward Dadagaun was in midlife. I wanted to shake up my life as a mid-career social worker, with college age children and reconnect with my vital self. I was drawn to trekking the ancient paths of Nepal in 2000. Inspired by this transformative experience, I hired a coach and in 2010 developed “The Trek of Your Life,” a voluntourism business designed to offer an opportunity for mid-life rediscovery in a unique environment. The purpose of my business is to give people a unique opportunity to challenge themselves both physically and spiritually, as they think about how they would like to spend the second half of their lives. My goal is to assist fellow travelers in their interior and exterior journeys as they seek meaning and purpose in their lives, by engaging them in global causes. I do this by sponsoring service-oriented group tours to Nepal where participants engage in their own inner journeys while serving others. In 2011, I took a small group of courageous women to join an organized program to interview Nepalese villagers in their homes to determine what assistance they needed most.

One young mother said to a group of us gathered outside her front door, “I will do whatever is necessary for my baby to go to school.” When asked, “What would you like for yourself?” she revealed that she had left her own beloved school at age twelve, expected to stay home to care for parents and work on the farm. “If I could have adult education, I would do whatever I needed to do to learn. I would like to learn to be a tailor.” Within a few weeks, a sewing machine was donated for her to use.

After trekking in Mustang, Annapurna, the Everest region and working in Dadagaun, I know that nothing can replace access to education for these rural children. Nepalese parents value education knowing that it will protect their children, boost self-worth, and provide opportunities for a better quality of life. The second year our trekking group donated four laptops, money for a computer room, a parent education workshop, and basic accounting to track expenses. The third year, we interviewed children living in the orphanage and completed a basic intake form with date of birth, brief social history, and health assessment. One of the questions we asked was how they felt about living in the orphanage. All but one, a 4-year-old recent arrival, said, “Very happy.” She, like many of them, had been abandoned and lost until the orphanage manager, their “father,” came to get them or someone from their village took them to the orphanage. Some were abandoned because their mothers remarried after their fathers died while working and their new husbands didn’t want more children to feed. Many parents died from diarrhea, TB, or simply falling off a high ridge carrying a heavy load on their backs.

Prior to this, no records for these children existed. They became visible. For them, it is far less likely to disappear into a dark future of global child trafficking. They know that they are counted and that they count.

Last year we raised money on Crowd Rise to hire a music teacher and purchase 28 indigenous instruments for the children. Enough money remained to pay school fees for 26 orphans. A fundraising concert on our last night in Kathmandu raised additional money for school supplies, $52/child for one year.And beautifully, it exposed the children to young Nepalese musicians, sharing their unique musical heritage.
The surprise for many who join is not only the personal reconnection with villagers but also with themselves. Last year, five group members were moved to organize a fundraiser for Nepalese non-governmental organization serving trafficking victims. They raised enough money selling bracelets made by Nepalese children to purchase acreage to grow coffee, allowing formerly victimized people to become self-sustaining.

Today in Dadagaun, most residents are living in tents or under tarps because their homes are little more than crumbled walls and caved-in roofs. Among those sheltering in makeshift tents are the orphanage children. The orphanage manager’s heartbreaking assessment: “Our building is made rock into soil and is very badly damaged.” Steve Webster, owner of the Shivapuri Heights Cottages near the village, has worked for almost a decade with Dadagaun villagers. He reports: “The ground is cold and damp, the rains of an early monsoon add to their discomfort and fear. Landslides are a threat and aftershocks from the earthquake rumble on daily.”

Other remote villages have suffered the same or worse. Is it any wonder that these families are desperate? My deepest hope is that the education and sense of self-worth that our small investment has offered to Dadagaun children and families will sustain them through these difficult times and help them persevere and avoid being victims of predatory child traffickers.

To contribute to the rebuilding of Dadaguan, as well as continued support of educational programs, please see the following websites:
http://thetrekofyourlife.com/

This is an amazing article! I am so moved by Sydney's passion to help others and make a global difference.

How to Choose the Perfect Pair of Glasses

Jennifer Connolly adds her own personal flair to everything she wears - even her prescription glasses! Read more from Jennifer on...