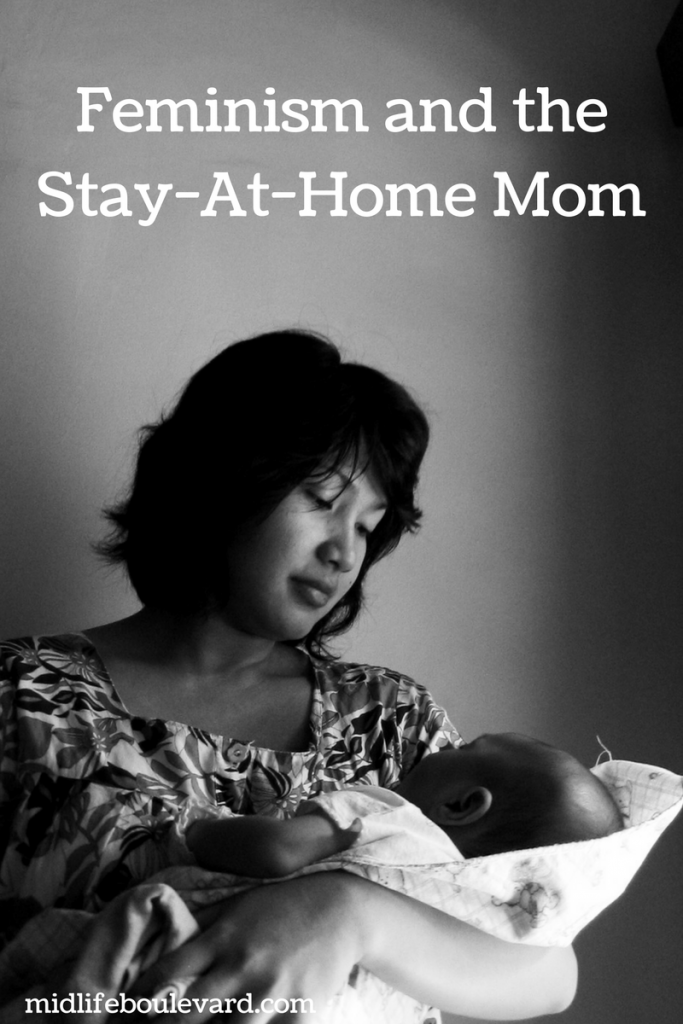 Sharon Greenthal can be found on her site, Empty House Full Mind, and over on About.com as the Young Adults Expert. Her perspective on the stay-at-home mom and how they relate to feminism is one you’ll want to read about.

“To be a stay-at-home mom is a privilege, and most of the housewives I have ever met — none of whom do anything around the house — live in New York City and Los Angeles, far from Peoria.”
– Elizabeth Wurtzel, author of 1% Wives Are Helping Kill Feminism and Make the War on Women Possible, in The Atlantic magazine, June 15, 2012.

According to Wurtzel, all of us who choose to be stay-at-home moms, whether members of the 1% or not, are betraying the cause of feminism.

Why? Because we do not earn any money. By giving up the ability to contribute financially to our families in order to stay at home and raise our children, we forfeit any claim to feminist beliefs, behavior, or identification.

Particular animosity is leveled at the wives who are fortunate enough to be able to live at the 1% level – how dare they get a massage or their nails done! By doing so, they have invited the war on women to not only continue but thrive, fueled by their utter lack of concern that everything they do depends on their husband’s income.

Yes, it’s the rich ladies of our country who are the real cause of the lack of equality in pay for men and women. If only they’d stop exercising and shopping and get a job, everything would be okay, according to this article.

“If you can’t pay your own rent, you are not an adult.”

That’s what Ms. Wurtzel said. And if you’re anything like me, whether you worked while you raised your children or stayed home, you are insulted by comments like these (and there are many in the article). Wurtzel equates the decision by a family to have one wage earner (male) to the acceptance that the woman will give up all of her power and be “bossed around” by the monster that she is married to who has all of the money.

Because according to Ms. Wurtzel, being a stay-at-home mom comes down to this:

Is earning a living a requirement to claim the label ‘feminist?’ #SAHM #womenCLICK TO TWEET

“Yes, of course, it’s something — actually, it’s something almost every woman at some time does, some brilliantly and some brutishly and most in the boring middle of making okay meals and decent kid conversation. But let’s face it: It is not a selective position. A job that anyone can have is not a job, it’s a part of life, no matter how important people insist it is (all the insisting is itself overcompensation).”

Hmmm. So let’s extrapolate out a bit and assume (a big assumption) that “anyone” can get a job working the counter at a local fast food restaurant. Does that mean that isn’t a job? Do those wages not count because “anyone” could get that job? How about a janitor, or an orderly at a hospital? Or what about a housekeeper? Do their wages count for nothing too?

There is nothing worse for women than women who bash other women, especially with comments such as this:

“Let’s please be serious grown-ups: real feminists don’t depend on men. Real feminists earn a living, have money and means of their own.”

Real feminists support each other’s decisions to choose the life that they want.

This includes the choice to be a stay-at-home mom without attacking them for living a life that is different from what they have chosen for themselves. I respect Ms. Wurtzel’s choice to live as a single, childless woman, even as I laugh at her article, which takes issue with all stay-at-home moms. I am happy with my choices in life, and I am happy, thanks to the feminist movement, that others are able to choose how to spend the precious time of their lives.

An Ode To Serial Daters

Jackie blogs at Hope Boulevard about midlife as a single woman. This post on serial daters was originally featured there. As a...