I came late to the Jon Stewart party. Mostly because my husband and I go to bed early. Like 10 or 10:30. It’s not that we’re old – we’ve always gone to bed early.

“You have to watch Jon Stewart,” my brother would say to me. Over and over. He likes to stay up late.

Meh. I got it, he was funny. So what? I could live without it.

It turns out I can’t. 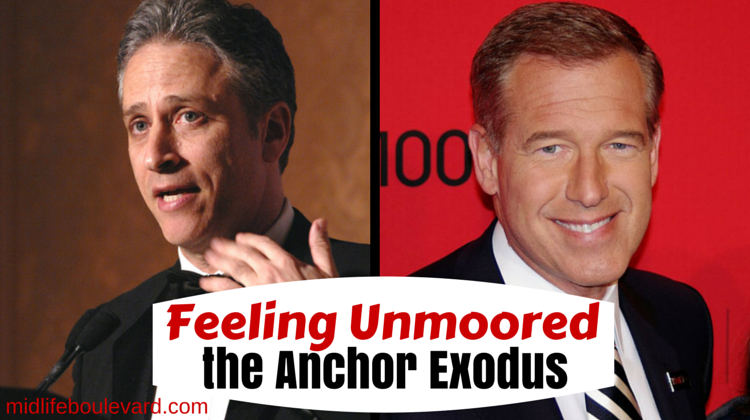 My husband and I started recording The Daily Show every night and then watching it the next night when we get into bed, and let me tell you – it’s freaking hilarious. It doesn’t matter that the news is a day old. It’s still funny.

But you already know that.

Because unlike my husband and me, everyone in the world has been watching Jon Stewart for a long time. We’ve only been watching for about 18 months.

And now Jon Stewart is leaving. Along with Brian Williams, our other favorite person to watch each evening, while we ate dinner, like the alter cockers we’re becoming. We didn’t just watch Brian Williams, we discussed the important stories and shook our heads at some of the insipid things he reported  (like talking about his daughter in Peter Pan? That was just wrong). He was the third person at our dinner table, but in a good way. He kept us on our toes, getting us to talk about topics that were more important than updates about our friends and family, bills to pay – the mundane things of life.

And then, before bed, Jon Stewart makes us laugh about those same topics, gets us to discuss, again, what’s going on in this crazy world. It’s good to laugh before going to sleep – it’s good to laugh with your spouse, the lights off, relaxed and ready for the day to end.

I know Brian Williams lied, and I know Jon Stewart is probably so over doing the same thing, night after night, for 15 years. I get it. But they’ve disrupted my life, with their lying and leaving. There’s not a lot in the media I can count on – CNN is always there but so irritating, and I’m not a fan of David Muir, or whoever it is that anchors the CBS news. Unless Brian Williams comes in as Jon Stewart’s replacement (which would actually be a brilliant move), it’s hard to imagine anyone else being as entertaining as Jon Stewart has been for all these years.

Jon Stewart is so familiar to me. He reminds me of boys I knew growing up, the smart-alecky and brilliant boys who couldn’t get a girl to save their lives but made us all laugh until we cried. There are variations on this type of boy, but for me, Jon Stewart is perfection. Sometimes his stuff is stupid, but most of the time it’s spot-on funny. And he surrounds himself with people just as funny as he is, people who he lets shine, Like Jessica Williams with her Medusa-snakey hair and Aasif Mandvi, loud and rude and adorable. Jon doesn’t mind if they’re funnier than he is. He’s clever that way.

Brian Williams, on the other hand, is the hot guy that never even glanced my way – the popular, gorgeous boy who seemed touched by good luck and great genes. Brian Williams is also incredibly funny, though he didn’t get to show it much on the news, which makes sense. I saw him speak in person once, and I became a huge fan. Though I suppose this is what brough him down- his desire for laughs and attention. A good news anchor on a serious news show shouldn’t be as interesting as the news he’s reporting, but that’s what Brian Williams wanted, I think.

The first time a news anchor broke my heart, it was when Jane Pauley left the Today Show. I was attached to her, and I felt such a loss when she moved on. I’ve never really felt that kind of trust and admiration for an anchor until Brian Williams – and Jon Stewart. Now I’m being abandoned again – but I’m older and wiser. I understand the lifecycle of media personalities. I’m sad but resigned to Brian Williams’ fate. I’ll miss Jon Stewart, but I will move on, just as he will. And though no one can replace him, I’m sure someone will follow in his footsteps in a different, but entertaining way.

He or she just won’t be Jon Stewart.

Sharon - I am with you on this one, especially concerning Jon Stewart. He was on my "list" of favorite people who gave me in hope. I might just have to stalk him. Well written and thoughtful blog.

Disclosure: this is a sponsored post from UPromise. Money is still one of the most taboo topics. I know quite...