A few months ago, my Travel Tuesday post was an interview with travel blogger, Billie Frank, with pointers for visiting Santa Fe, New Mexico. Now I am stunned and saddened to have to report her sudden and unexpected death.

Her passing caused me to once again reflect on the ephemeral nature of our existence on this planet, and also on the nature of friendship. 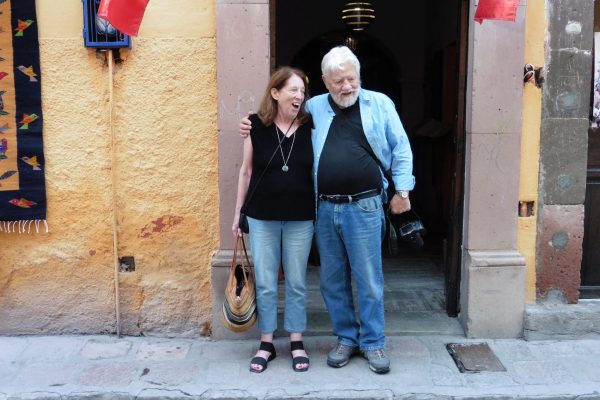 Like many baby boomers, I have a love-hate relationship with Facebook, sometimes both loving and hating it on the same day.

As a travel blogger, I understand that an active social media presence is an important part of getting the word out, of proving one’s “influence”. Sometimes, this imperative to be “out there” bumps up against my desire to be in the moment, rather than observing, describing, recording and sharing the moment. I feel guilty that I’ve trained my partner in life and travel, Mr. Excitement, to pause before enjoying an attractive meal to ask me if I “need” a photo of his plate.

On the other hand, social media has helped me become a more extroverted introvert. I have connected, and re-connected, with people from all over the world and from long ago layers of my life.

I now know more about some people from the old neighborhood where I grew up than I did when I lived across the street.

I am friends with classmates from high school who I barely knew (or didn’t know at all) from back in the day at the Philadelphia High School for Girls. The nerdy orchestra woodwind player group was kind of small.

Thanks to Facebook, I’ve rediscovered classmates from when we lived in England in 1969-70 where my father was an exchange teacher.

On Facebook, I reconnected with my long ago Colombian host family from when I studied in Bogota in 1974, and learned that my goofy teenage Colombian “brother” grew up to be a radiologist and professor of medicine.

I was so far from being a “cool” person during my college days that in my college year book, my picture appears on the last page with a loooong ago ex-husband captioned “guess who”. Now, former college classmates know (and appear  concerned) that I can’t seem to keep track of my favorite travel black cardigan.

It has been gratifying to find that because of my blog induced low social media privacy settings, some of my Facebook friends have become friends of friends, forging their own online relationships with each other.

It is popular to decry the human intimacy we have lost from being on social media rather than out meeting up with “real” friends. Recently I was reminded of how real a friendship initially made on Facebook can be. Sadly, this reminder came in the form of a Facebook posting by Steve Collins, the husband of travel blogger, Billie Frank.

On Facebook, Steve shared the very sad news that he was devastated “yesterday” by Billie’s unexpected, sudden death. Judging by the numerous heartfelt comments under his Facebook post, I’m not the only person feeling a visceral sense of loss at this news. As confirmation that on line relationships can be important, many of those commenting about what Billie meant to them, started their comment with”I only knew Billie online, but……”

I soon realized how engaged and giving Billie was in running that group and in helping us forge connections. 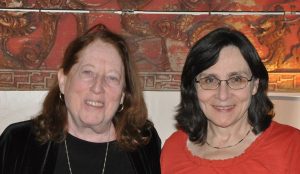 Neither Billie nor I were very fond of this photo at the time, but now I am happy I have it.

I met Billie and her husband, Steve Collins, IRL (in real life) when Mr. Excitement and I made our first ever trip to trip to New Mexico in 2013. She and Steve met us for dinner in their beloved Santa Fe. They even graciously took us to an Italian restaurant, of all places, given my inability to tolerate chile filled cuisine.

Mr. Excitement was relieved to learn Billie’s husband’s name was Steve since that’s also Mr. E’s real name, thus vastly increasing the chances he would remember Billie’s Steve’s name. After that meeting, Billie and I always referred to our husbands as “your Steve” or “my Steve”.

During our time together, Billie told me she was spending a lot of time and energy running the Boomer Travel Bloggers Facebook group and asked if I would help out as her co-administrator. I agreed and ever since, she and I were in contact, via Facebook or Facebook messenger, at least every week, if not daily.

Given Billie’s warmth, our communications were often personal rather than business related. When I became travel editor here at Midlife Boulevard and was scrambling for content, Billie graciously agreed to take the time to be interviewed for one of my weekly posts. I re-read that post now with a lump in my throat.

So, thanks to Facebook, I met and became friends with Billie Frank. I’ll always feel a pang at her absence when someone on Facebook blames some misfortune on Mercury being in retrograde, Billie’s “go to” explanation when things went awry. And thanks to Facebook, there will be a frequent reminder of the void in my life where her voice used to be.

How do you feel about Facebook and social media in general? For those who had the good fortune to know Billie Frank, please share your thoughts and memories.

12 Thanksgiving Desserts Everyone Will Love

Looking for a delicious dessert to serve your family this Thanksgiving? Try one of these, everyone will love them! Classic...