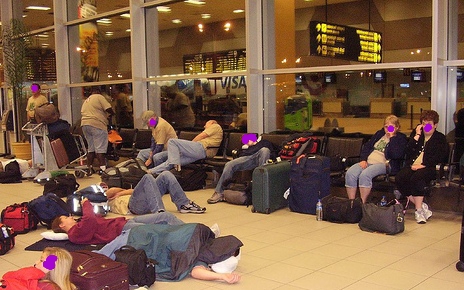 This is not what you want to see when you deplane for your airport layover.

“Enjoy” and “Airport Layover” are words not often found in the same sentence.

Avoiding airport layovers often comes with a higher fare for a non-stop flight. However, that price differential can easily be eclipsed if you miss a connecting flight and end up having to spend a night in a hotel. If you can afford it, opt for a non-stop itinerary.

With current overbooking rules and the pressure on airlines to fly full, I’d rather have too long an airport layover than too short of one. Rebooking missed flights can be mightily unpleasant. This means I spend a good deal of time cooling my heels during airport layovers.

Our record time for airport layovers occurred when I decided it would be a good idea to fly from Philadelphia on the east coast of the United States to Chiang Mai in northern Thailand all in one go. Looking back, we now fondly refer to that trip as “The Longest Day“. I admit to a “what was I thinking?” moment as we waited to board our 5th flight of that “day”.

Research the Airport Where You Will Layover

If you know you will be facing airport layovers, do some pre-travel research about the airports in which you’ll be hanging out. You’ll want to know if you’re going to have to go through security again to get to your next departure terminal (I’m looking at you LAX ) or that it’s a 25 minute walk and train ride to get to your new terminal. (Hola, Madrid-Barajas Airport).

Given that most air travelers will sooner or later face an airport layover, here are some suggestions of things to do before you board your next flight.

15 THINGS TO DO DURING AN AIRPORT LAYOVER

*1) Go to the bathroom. Surely you prefer performing bodily functions on terra firma rather than in a windowless box of suspect cleanliness at 35,000 feet in which heaven knows what those other people were doing.

*2) Get some exercise by going for a walk. Chances are you’ll be getting some exercise anyway, depending on the distance between the gates (or terminals) for your arriving and departing flights. At some of the bigger airports, you can literally walk for miles. If you really want some exercise, skip the moving walkways.

*3) Even if you’re flying in coach, buy time in a business/first class airport lounge. They are not all created equal, but most have “free” food, “free” beverages (often including some adult beverages), “free” wifi, and charging stations. Some even have showers and horizontal sleeping possibilities. You can book these ahead sometimes through your airline. There are also some high annual fee credit cards that include access to many airport lounges even if you’re flying on an economy ticket, including my favorite, Chase Sapphire Reserve. 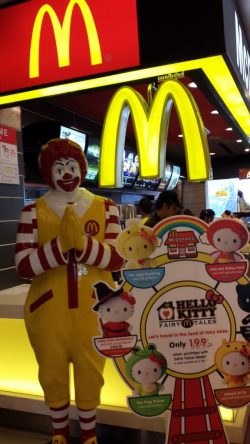 *4) Eat: Since there is no longer “free food” in economy on domestic flights, an airport layover is a good time to refuel yourself.

Most airports have some food selling venues, including food courts. If you have a long layover and aren’t springing for an airport lounge fee, consider picking an airport restaurant where you don’t clear your own table. We had a nice meal at the Legal Seafood in Logan Airport (Boston) on a recent trip.

You can research the restaurant possibilities on-line before you fly or once you’re at the airport. Google: “Restaurants” and the code for your airport. You don’t want to choke down the last bite of your food court choice to later learn that your favorite restaurant had a branch a few gates away.

*5) Shop: If you will be flying internationally, an airport layover is a good time to browse the duty free and other shops, especially if you forgot to buy a gift for someone who you know will be offended if you don’t.

There are usually stores beyond the “My Grandma Visited Fill in the Blank City and All I Got was This Crummy Tee Shirt” variety. Some airports even have sections that actually look like shopping malls.

I love finding book stores in airports and you can catch up on your magazine reading in many of the sundry/newstand airport stores when you stop in to replenish your gummy bear supply.

In some airports, you can even plop yourself down in a comfy rocking chair to read or work. 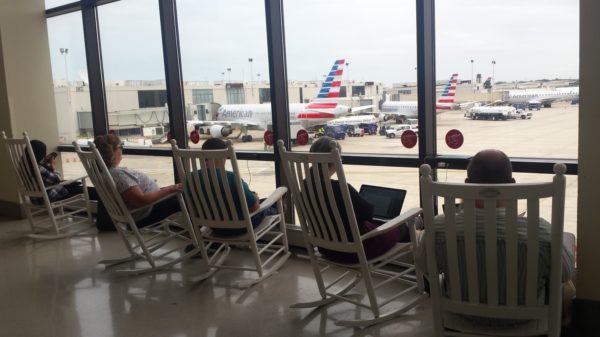 At Philadelphia International Airport, these rocking chairs even have outlets so you can charge your electronic devices.

Caveat: There was this little speaker I bought at an electronics airport store in Vietnam. It never worked. It’s 8,921 miles from Philadelphia to Ho Chi Minh City. I guess I won’t be returning it.

*6) Recharge your devices: Many airports have charging stations. If you have a long enough layover and  politely wait your turn, you’ll probably get access to one sooner or later.

*7) Work: Speaking of devices, some airports even have tables where you can charge your lap top while you work. Even if you don’t want to work work (i.e. actually use your brain), you could cull the photos on your smart phone or start deleting some of those 27,549 emails if you’ve scored usable wifi.

*8) Call someone. Make sure you’re clear on what time zone you’re in and they’re in or “someone” could be very annoyed. If you do this, puhleeez move away from your fellow passengers who really, really don’t want to have to listen to you breaking up with your boy/girlfriend or know how long it took you to pass your kidney stone.

*9) People watch—discretely, of course. It’s definitely not a good idea to stare at anyone wearing a uniform and flak jacket, holding an AK 47, accompanied by a large dog. But you knew that. Right?

Even if your layover airport doesn’t offer a free tour, if you have a long enough airport layover, research whether you can pre-schedule your own tour or can get into town for an informal look-see. Remember to leave enough time to go through security screening again upon your return.

*11) Sight see at the airport. Many airports have rotating and permanent art installations or other exhibitions. If you’re an aviation nerd you can plane spot.

Speaking of looong layovers, we flew Iceland Air to London because they allow up to a seven day layover in Iceland on the outbound or return trip. We spent 7 days sightseeing in Iceland.

*12) Get a haircut and/or massage: Many airports have day spas or hair salons where you can catch up on our personal grooming. Of course, if you decide you hate your haircut while hurtling above the earth in a pressurized tube during your next flight, that’s probably just too bad. Maybe just go for the massage.

*13) Sleep: During your airport layover, you always have the option of curling yourself up in a seat purposely designed to keep you from getting too comfortable. If you’re exhausted, it may suffice.

However, if you’re traveling alone and your exhaustion exceeds the discomfort of your seat, make sure you have your personal belongings arranged in such a way that no one can walk off with them while you’re in Dreamlandistan.

If you’re willing to spend some money to get horizontal, there are other snoozing options at many airports.

You may be able to get a day rate room at a nearby airport hotel. If you’re not too claustrophobic, you may find sleeping pods available. Some airports have little rooms to rent by the hour that are set up for work and/or a nap.

*14) Hobbies: If you have a portable hobby (i.e. not archery), bring it along. Some people already know I’m a Zentangle® (a meditative art form) addict. 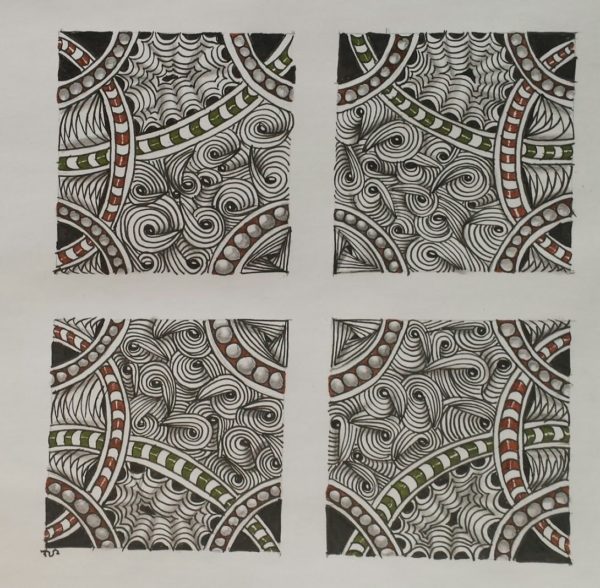 I wasn’t thinking of tangling while traveling, but it turns out it’s wonderful during airport layovers. In fact, it even makes me wish I had a longer layover sometimes.

Knitting, needlepoint and embroidery can also be portable time passers during an airport layover.

*15) Go to the bathroom again. You know your mother would want you to do this, just in case, even if you don’t think you have to go. (If you do this in Japan, give yourself plenty of time before your next flight because Japanese toilets have a learning curve.) 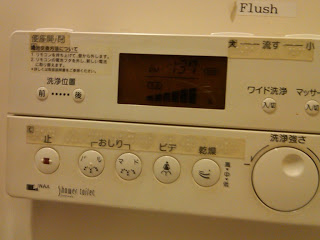 Oh the humanity found in a bad weather airport! I love the Ronald McDonald! When I used to fly frequently I had free passes to the club rooms. It was wonderful for layovers or weather issues in a fogged/snowed in airport. Those days are gone and yes I have been on the floor in Chicago just to wake up when the cleaners are vacuuming around me around 5 AM and the business travelers are starting to arrive! Not my best moments for sure. Speaking of Chicago WoldGang Puck has 2 of his restaurants there. One is more a grab and go or light dining and the other is a real sit down. Goes along with what you say about looking for good food in an airport.

I attended an advance screening of the new Star Wars movie, The Last Jedi. This is a spoiler-free review, but...