This is part 3 of Barbara Younger’s series of posts about her experience with Endometrial cancer. We are so grateful to Barbara for sharing her story with us. Read more from Barbara on her blog, Friend for the Ride. 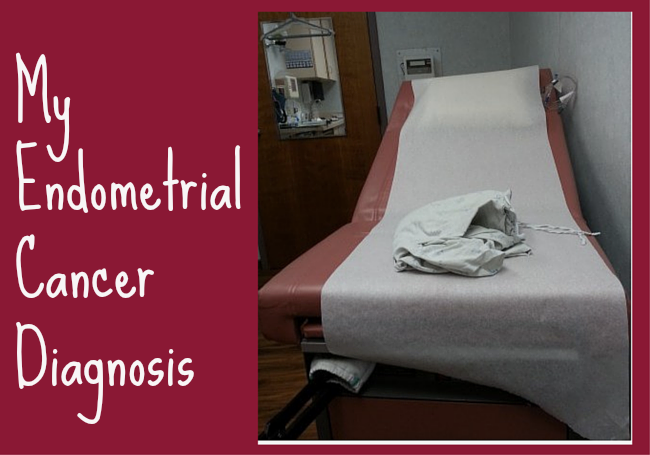 My crumpled gown after the D & C.

During our period years, a bit of  spotting is usually no big deal.

But when that blob of blood comes in menopause, the panic siren sounds.

I saw my first bit of blood in October, for  a day. I panicked, somewhat, but decided to wait for more blood to appear before I went to the doctor  (which of course I shouldn’t have done and don’t you dare do!)

Next occurrence was January.

I knew I couldn’t ignore it again.

“All bleeding after menopause is abnormal and cause for concern,” website after website warned me. (But only one in eight cases ends up being cancer, the websites also said.)

At my first appointment, the technician conducted a  vaginal ultrasound.

“We couldn’t see your endometrium,” Dr. Fried said afterwards. “It may be so thin that it’s just not showing up on the screen, but we need to keep investigating.”

A thin endometrium, in menopause, is what the doctor wants to find. Thickening may be an indication of cancer.

Next came the  Sonohyseterogram. They shoot a saline solution into the uterine cavity to make the walls more visible. I had a couple of jump-off- the-table moments as the doctor moved the tube with the saline around. He and the technician kept an eye on the ultrasound screen.

“There it is,” Dr. Fried said in minutes. “Most likely a fibroid.”

Damn, I thought. So much for the thin endometrium.

“The fibroid is probably the cause of the bleeding, but it’s obscuring part of the uterine wall,” he told me. “I need to biopsy that area because we can’t see it, and we need to make sure this is a fibroid, not a polyp.”

(Fibroids are rarely cancerous; some polyps morph into cancer.)

Next, came some frustrating months getting me on the right blood pressure medicine, so that I could have anesthesia for a D and C.

(Lesson here: Don’t get behind on any aspect of your health. My blood pressure, which was elevated, shot up to crazy numbers at each doctor visit thanks to white coat syndrome.)

(Another lesson: I had only one more minor spotting incident from Feb. to June. I came close to cancelling the D and C. Glad I didn’t. Blood is blood, even if it stops.)

Chapel Hill OB/GYN offers an in-office D and C. Since having a D and C this way is cheaper, simpler, and for me, less scary, I opted for in-office over hospital.  (My doctor will not do an endometrial biopsy, BTW, without sedation. “We used to do them while women were awake,” he explained, “but we came to realize the procedure is just too painful.”)

D and C Day finally arrived. I’d never been sedated/put to sleep before.

I blinked and there I was looking at Cliff and the doctor in the recovery room (the same room, above, where we started).

“The fibroid is fine. It can live with you for the next forty years,” Dr. Fried said. “The uterine walls looked a little puffy though, and I found and removed a polyp.

Not the news I wanted.

But not, as the doctor then suggested, necessarily bad news.

The procedure was on a Friday. I was to hear in three or four days.

Monday afternoon, a sort of panic set in.

At the same time, I imagined the relief of sending a mass email to friends and family headed “BENIGN.”

Tuesday afternoon, the panic grew. But when five-thirty came with no word from the doctor, I figured I wouldn’t learn anything until Wednesday. I relaxed, somewhat, for the evening.

Cliff is on a major campaign to rid the lawn of magnolia leaves. I stepped outside to assist with some raking.

At seven-thirty, I came back in to find a message on my phone.

“Barbara, this is Dr. Fried. I’ve got your biopsy results, and there is evidence of a very early cancer. I hate leaving you a message this way. I think you’re going to be fine, but we need to talk.”

Dr. Fried said to call him right back at home if I could and that he would be in the office tomorrow if I didn’t reach him that night.

Dr. Fried is a jokester. He tells stories, turns a clever phrase, and gives his nurse instructions in French.

But in his message and in the much longer phone conversation we had next, his concern was getting me the information I needed.

Shocked, sad, but oddly calm, I was able to take in the compassion in his voice.

I’ve learned a lot from my cancer experience. One of the happiest, simplest lessons is that kindness and compassion always help.

My doc is sporting the plaid shirt. He’s also the only man in the picture.

PS. Some friends have winced when they hear that my doctor delivered my cancer news in a phone message.

No! I appreciated it so much. He’d promised to tell me by phone, none of that “Come into the office to get your results stuff.”  As he said when we connected minutes later, “I hated to tell you in a message, but I knew if I just said to call me, you’d figure out the news wasn’t good.”

Yep. This way, he was able to reassure me a bit before I even returned the call. Thanks, doc!

Direct is best, and I'm so glad he didn't make me come into his office to hear the news. So glad you had good care too. It sure makes all the difference. Thanks for your comment and your good thoughts! I'm doing well now and hope cancer is past me.

My OBGYN was the one who gave me the news about my breast cancer prognosis from the mammogram results and he, too, was very compassionate although direct. I prefer direct, when it comes to my health. I hope that you're doing well and that you're through the worst part of your cancer experience. Thank you for sharing it with us, it's so important to know what to look for and what to expect.