I just returned from the insanely expensive resort where I vacation for a week at the end of each summer, which makes me sound like the kind of person who can actually afford that kind of thing.

Alas, because I work in a public library, I have to save  all year for that one week in paradise. 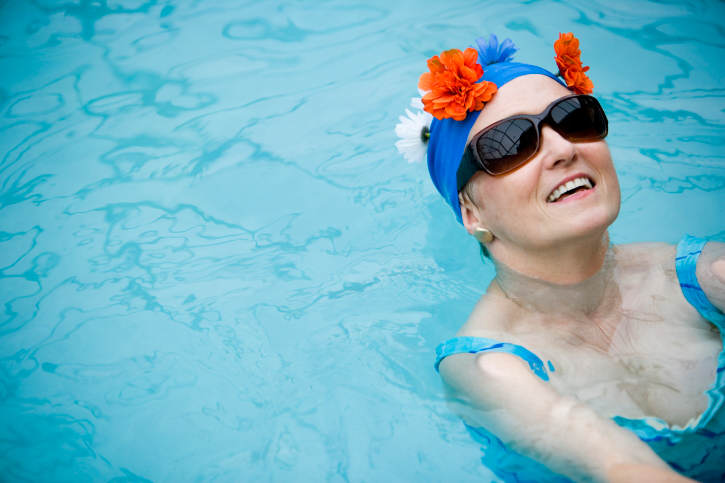 But it‘s usually well worth it. Because the Absurdly Expensive Inn is, indeed, heaven on earth. The rooms? Beautiful. The staff? Super-competent. The cookies on the pillow at turndown? Bliss.

But the best thing about the Bank-Account Draining Inn, if you’re a swimmer like me, is the pool.

Large. Sparkling clean. Ringed with flowers in bloom. For the rest of the year, as I swim in lesser pools, I’ll close my eyes and imagine that I’m there instead. (Then reopen them before I swim into the wall.)

The day before I arrived this year, I phoned the desk clerk to make sure the pool was up and running, a little precaution I’ve taken ever since I checked into another hotel years ago, only to discover that the pool was closed because a toddler had just done something no toddler should ever do in a pool.

“You haven’t turned on the pool heater?”

“There IS no pool heater.”

“No pool heater? Are you sure?“ How could this be? The water had always been maintained at a balmy 86 degrees!

“It isn’t a heated pool. That’s what they’ve told me.”

I was tempted to cancel my reservation, but I was vacationing with friends to whom a pool is merely something you recline beside while you sip iced drinks and read bodice-rippers on your Kindle.

You could stock the pool with piranhas and they wouldn’t care.

I couldn’t bail on a vacation we’d all looked forward to just because the pool they weren’t going to swim in was too cold to swim in. So I did what I always do when life hands me lemons. I phoned my sister to kvetch.

“They told me that there isn’t a pool heater,“ I wailed.

“They’re lying, ” she said, then went online and pulled up half a dozen travel sites which enthused about the Inn’s glorious heated pool. When I emailed this list to the Inn’s manager, I received a return email from her assistant, Mr. Useless, who insisted that not only was there no pool heater, but there had never been a pool heater.

If I wanted a HEATED pool, he suggested, I could always enjoy a swim at the local YMCA. He concluded, mysteriously, with the sentence: “I hope I have met your concerns.“

Yeah, on Bizarro World, maybe, where you ask about the pool heater because you WANT the water to be the same temperature as the iced drinks served poolside.

When I arrived at the Inn the following day, the plot thickened.

“Of course there’s a pool heater,“  she said. “But it costs a fortune to run, so this year the manager decided not to turn it on.

I asked to speak to the manager.

“She’s out of town. Would you like to speak with Mr. Useless?”

I did not. But for the rest of the week, I played Nancy Drew, asking everyone on staff about the elusive pool heater. To a person, they confirmed that there was one,  but the Inn was opting for a cool pool this summer to save a buck.

Determined not to let the Lying Tightwad Inn’s penny-pinching ways defeat me, I got in touch with my inner Polar Bear and dove in anyway. I discovered that I’m tougher than I’d thought.

At 58, I can still endure, if not enjoy, a daily swim in bone-chilling water.

Besides, a true swimmer hates a crowded pool, and, if nothing else, I always had that sucker to myself.  Gliding back and forth, teeth chattering and slowly turning blue,  I’d watch would-be swimmers approach,  dip a toe in, then shriek and retreat to their chaises to pen furious Trip Adviser reviews.

Before I penned my own furious review, I thought it only fair to touch base with the Inn’s manager, who’d finally returned from whenever she’d been. (Perhaps at a seminar on “How To Lie To Your Guests And Get Away With It.”)

She claimed to have no idea the pool had a heater. The fact that you might actually be able to heat that glorious pool, she told me with a perfectly straight face, was news to her.

“I’ll look right into it!”  she said airily.

But I’ve never been the stinging retort type. My policy has always been: Don’t Get Mad, Get Even. Online.

Chilly Pool? Surely, a chilly review is in order.  One that asks a simple question: Can you honestly call yourself a luxury resort if you’re too darn cheap to heat the pool?
I don’t think so.

So listen up, Tightwad Inn! When I return next summer, I hope you’ve solved the mystery of the disappearing pool heater. Or I might be tempted to do something in that icy cold pool that no well-behaved librarian should ever do.

(This essay first appeared on Womens Voices For Change.)

Roz, This is hillariously unfornutate! A girl who grew up swimming in the south, I remember all too well those early spring sessions, blue lips and all... We called it torture... I do hope you wrote this establishment, and possibly a full review or two or three...

My vote is for asking before you book, and of course, getting it in writing... ;)

Love it! And what a bizzare thing for a 'luxury' hotel to do. I hope you write a very strong review, names and everything!

The Neutral Wardrobe Basics You Must Have

Welcome to our lengthy discussion around the boutique corner table here on the Midlife Boulevard about the fabulous Frenchwomen, their...