Exquisite and elegant best describes this decadent cheesecake. Each layer is distinctively colored and textured.  The thick topping features golden apple peaks rising above a dark glaze of sweet cinnamon.  The off-white creamy center perches upon a base of deep cocoa graham cracker crumbs.  The taste is a spectacular confluence of apple pie and rich cheesecake.  These two flavors were made for each other. Most cheesecakes however are loaded with calories, fat and cholesterol.  The closest fat version to compare is Cheesecake Factory’s Dutch Apple Carmel Streusel soaring at 871 calories and 26 grams of fat.  Happily my Skinny Apple Pie Topped Cheesecake is only 274 calories, 9 grams of fat and 8 Weight Watchers POINTS PLUS. 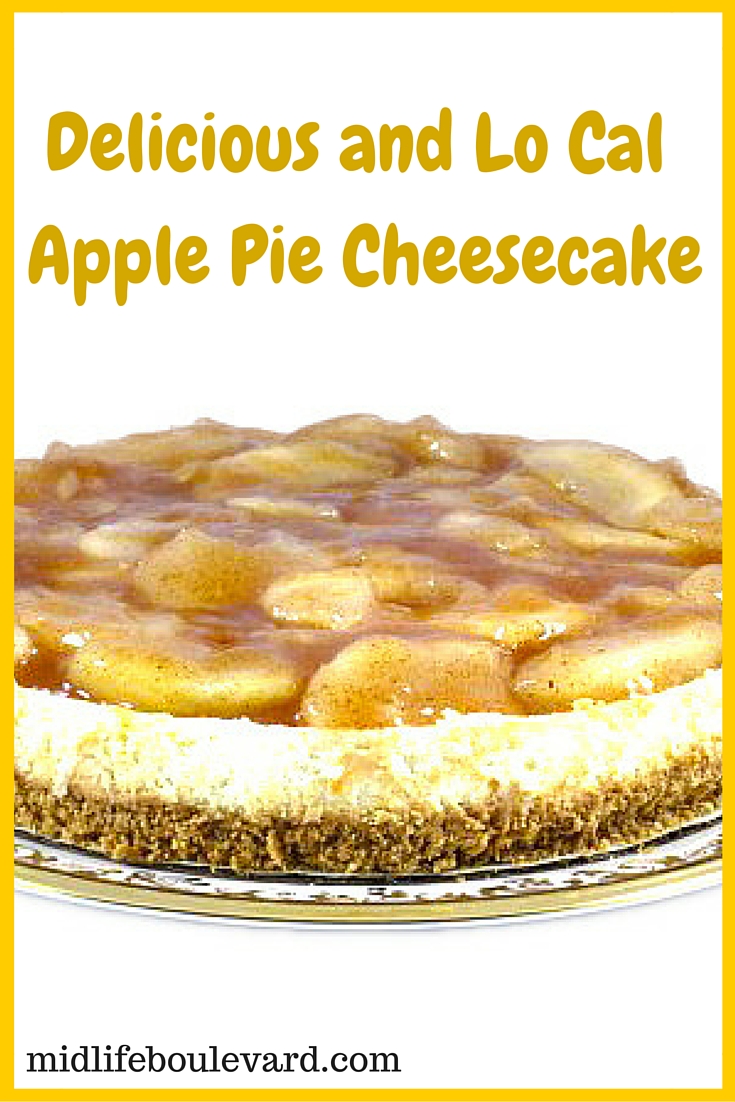 2. In a medium bowl combine graham cracker crumbs, butter and cinnamon. Press into the bottom of the prepared pan. Set aside.

3. To make filling: Using an electric mixer, or a hand mixer in a large bowl, beat the cream cheese until fluffy and smooth.  Slowly mix in the egg whites, egg, and sugar until smooth. Stir in the sour cream, vanilla extract, and lemon juice. Pour the mixture over the crust and spread evenly.

4. Bake for 35- 40 minutes or until the center is set. Cool completely. Refrigerate for at least 6 hours before serving.

5. To make topping: After the cheesecake has been refrigerated, in a small bowl, using a rubber spatula, combine the apple pie filling, sugar, and cinnamon. Mix to blend. Spread over the top of the cheesecake. Place in the refrigerator until ready to serve.

Food Fact
Cream cheese may be America’s oldest packaged food. Philadelphia brand cream cheese went on sale in 1885. Before that this cheese was so perishable it was bought only near the dairies where it was made.

Baking Tips
Always beat the cream cheese until light and fluffy before adding all of the other ingredients. Once the cheese is fluffy, slowly add the rest of the ingredients. If you beat too much air into the batter the cheesecake can fall during baking

Cheesecake needs even heat in order to rise properly. We recommend not to open the oven to peek for the first 30 minutes. Drafts can cause the cheesecake to crack.  But don’t worry if it does crack because we cover the top with the apple pie topping.

Storage Tip
Keep covered in the refrigerator for several days. This cheesecake also freezes great. Cut into single servings, wrap and freeze. When ready to unfreeze, unwrap and defrost on top of the counter.

Thanks for featuring my skinny cheesecake today. It's perfect throughout the fall and winter season. Have fun! My best, Nancy

5 Ways to Protect Your Complexion from Cold Weather

“If the temperature is less than my age, I don’t get out of bed.”  Ellen DeGeneres I am honored to...