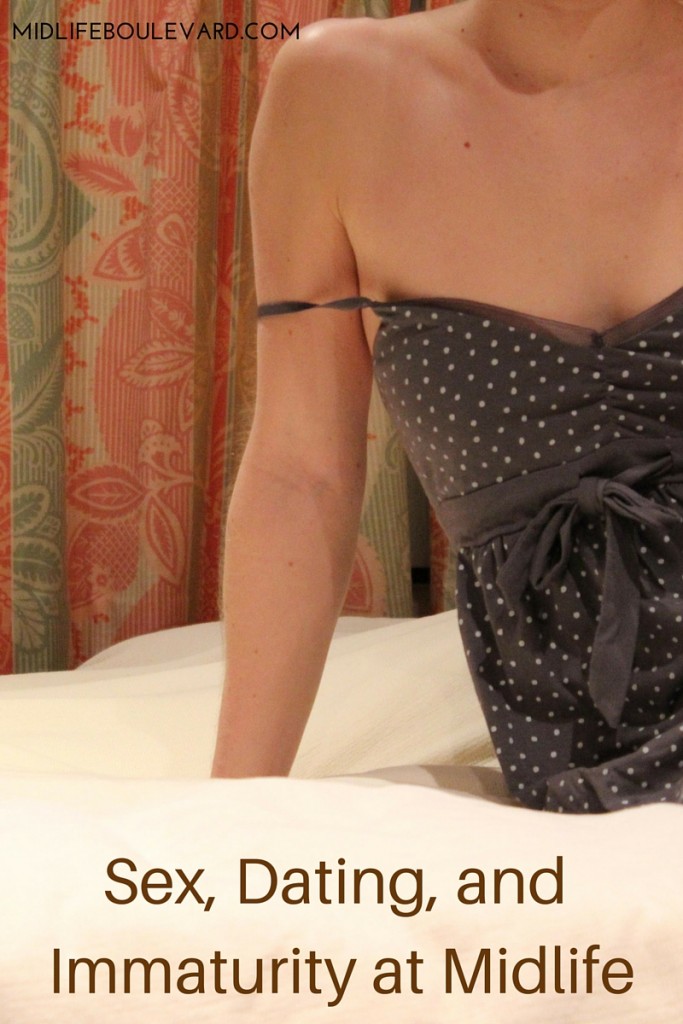 Dating can be quite a challenge the second time around. By the time we approach midlife we’re not expecting silliness and immaturity in our potential partners. But too often it seems that men in their 50’s and older quickly turn into little boys,   obsessed with sex. I’ve found that older men who find themselves single and ‘on the market’, or even not-so-faithful married ones turn into teenage boys at the prospect of engaging with a single woman. They seem to think that their urges justify this kind of bad behavior. I’m always taken aback when this happens as I expect the man sporting the dignified grey hair to show some signs of maturity and intelligence.

Not long ago I met a very witty, delightful, highly educated man who obviously wanted to have sex very much. But he couldn’t or wouldn’t talk about it. When I broached the subject of getting tested for STDs he was clueless as to how, why or where. So he made jokes about it. It’s somewhat understandable that he might be uncertain about how to proceed, even though he had talked to his adult doctor son about it! I gave him the benefit of the doubt and we discussed it. When I later asked if we might discuss sex, as we were already heading there, he avoided my request. Each mention of sex was met by cute little comments meant to distance himself from the conversation at hand. And at the same time he was urgently pressing his desire for sex.

I understand that my forthrightness about sex can be a little daunting for the older man who isn’t used to that level of openness in a woman or to the man who may find himself new to dating. But it’s important to talk about what you want and expect when it comes to sex. And the topic of sexually transmitted infections or diseases is vitally important. When talking about it feels uncomfortable that’s usually a sign that you’re not quite ready yet. And honestly? It’s my opinion that if it’s too awkward to discuss you clearly aren’t ready to have sex quite yet.

By the time we’re single and reentering the dating pool we are ready to have a little fun. Many of us are ready to have sex again! But we know that it doesn’t just magically happen. At least not good sex. We need to discuss things like STD testing and sexual preferences. And mundane things like whether to turn the lights on or off. I don’t recommend those conversations on the first date, as a rule, but you do want to start discussing sex before the clothes are flying off. These are practical conversations and personal considerations that will make sex more relaxed and enjoyable.

Men can be just as nervous and uncertain about sex as women. When you’re new to the dating game and haven’t had sex in a while the awkwardness is understandable. But it’s not very useful or appealing to resort to teenage jokes and play little avoidance games. And while it’s probably not ideal to address the topic bluntly, there still has to be some middle ground that makes both of you comfortable enough to engage in the conversation.

Dating in midlife is a balancing act. This new opportunity for fun, romance and love at this time of our lives is heady and can feel a bit like high school— but we still have to use some adult restraint and common sense. Good clear communication is essential to a good experience. So, if your date doesn’t feel the same way, please rethink whether he or she is worthy of sharing your time, or your bed.

I suppose it depends on the people, on their own mindset, no matter their sex. But you are right, that at this age it's not worthy to waste your time with the wrong people :)

yep! Thanks for reading!

Saying Goodbye to a Beloved Pet

Becky writes regularly at From Where I Sit. This post was originally featured there.  In early January, I had to...