Way before the days of “dad bod” and “Sh*t My Dad Says,” Kathryn Mayer’s dad was setting trends with his own classic words of wisdom and dad-isms. Read more from Kathryn on her blog. 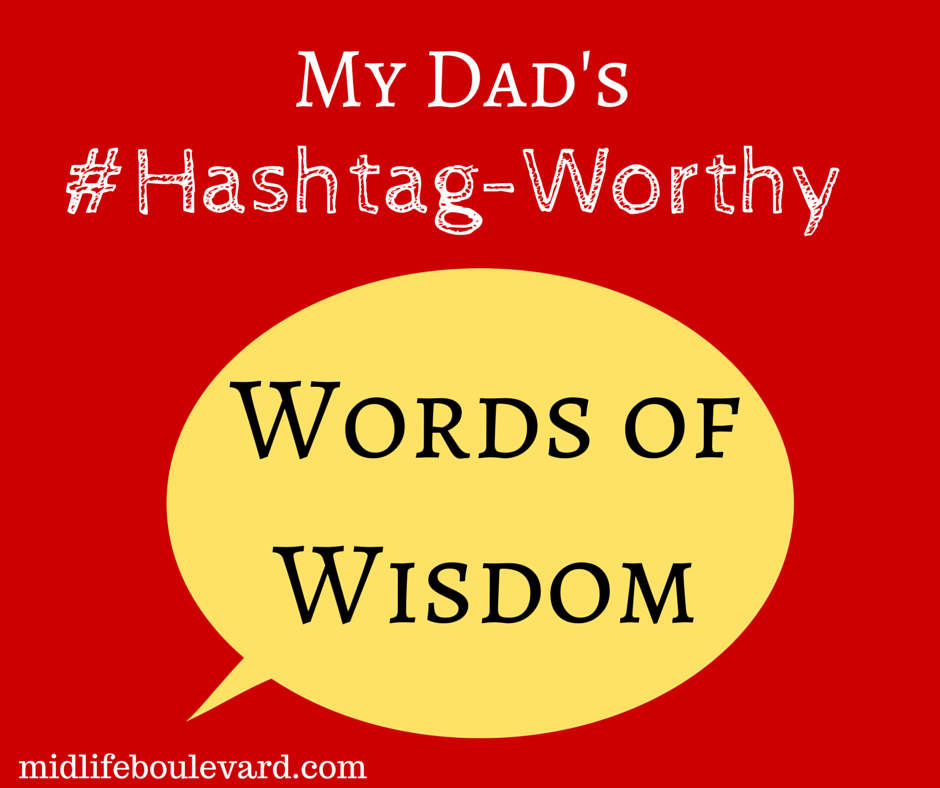 One day, the men we love will be hiking their belts up to their nipples and spouting off hashtag-worthy comments that, if lucky, their own kids and grandkids will be sharing widely … and often … and probably with a YouTube channel or Snapchat story, so the footprint remains longer than the one I grasp tightly in memory.

My father’s own cringe-worthy commentary echoed throughout with his loud, bellowing public statements of his truth, therefore my truth, and the rules my sisters, and eventually his grandchildren, lived by. Made little sense then, and less now, but it is these sayings that I hold on to now that he’s gone.

To honor him on this Father’s Day, I present here a partial list of Mike Mayer-isms, and I encourage you to stick a finger in the cake at your next party.

Colder than a witch’s tit in July.

“Get your foot off the clutch!”

You’re a wart on the ass of progress.

Drive that car like it was made to be driven.

Colder than a three-legged woman.

Get wood. Do not come in here empty handed, GET WOOD.

“Get any on ya?” (after a long, award-winning burp)

“Then he doesn’t deserve you.”

Gotta go see a man about a horse.

Do not come in here empty-handed. Get wood.

The smartest person in the room is the quietest.

You gonna eat that?

Dumber than a box of rocks.

Those apples fell far from the goddamn tree.

“I am so god-damn-proud of you girls.”

“Do not lean against that car unless naked as the day you were born.”

Mobil One in the car. Only Mobil One.

Don’t let the door hit you in the ass on the way out.

Got change for a five?

Wipe the off the goddamn headlights.

“Are all the parents assholes or just those two?”

Vote for your town’s budget.

“Goddamn it Siri, I just want to make an f’ing phone call.”

There’s no loans, only gifts.

Be nicer than you need to be to people who don’t expect it.

Do not talk to your mother that way.

“Just once I want to go to your grandmother’s without you smelling like horse-shit!”

And those words of wisdom are my inheritance, which I often hear myself repeating ad nauseam, that I didn’t appreciate when echoing across a public place, but today share widely with anyone who will listen.

Kate Mayer is a writer, humorist, and activist writing life down in Newtown, Connecticut at www.kathrynmayer.com. She is a reluctant inductee to AARP, the co-creator of two quasi-adults and two wannabees, and an aspiring writer with the rejections to prove it. Sometimes funny on Instagram & Twitter @klmcopy, and plays well with others on Facebook.

Kate Mayer is a writer, humorist, and activist writing life down in Newtown, Connecticut at www.kathrynmayer.com. She is a reluctant inductee to AARP, the co-creator of two quasi-adults and two wannabees, and an aspiring writer with the rejections to prove it. Sometimes funny on Instagram & Twitter @klmcopy, and plays well with others on Facebook.

Colder than a witch's tit- ha!!

Father's day is coming up and I wanted to take a moment to reflect on some significant advice my Dad...