This week’s inspiration comes from one of my own – my son. As some of you may know, he attends college in sunny California, about 3000 miles away from me. The three-hour time zone difference often makes it hard for us to sync up our conversations. Last week, after a failed FaceTime connection and three different attempts to schedule a call, I finally resorted to text and messaged him simply, 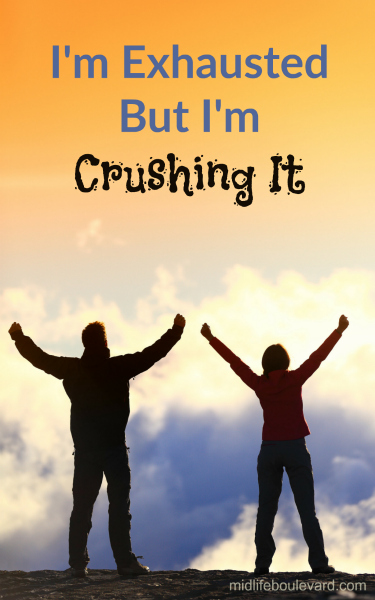 As I waited for my phone to light up with his response, I thought about that simple question. I guess that summed it up accurately. After all, that’s all I really wanted – scratch that – NEEDED to know. I wanted to know a whole lot more. I wanted to know about his classes, schedule, workouts, how it was going with his roommates, what was happening with his social life. You know – all those annoying details that mothers want to know.

Finally a shrill ding interrupted by daze, lighting up more than my screen.

I was expecting the exhausted and busy. But the words crushing it made me shake my head and laugh out loud.

“Great! ” I texted back quickly. Then I thought about it for a minute and added, “Me, too!”

I had finished my book proposal, queried a few literary agents, and just received two positive responses. I, too, was exhausted and busy from the midweek pace of appointments, to-do’s, and deadlines. But when I stopped long enough to take a snapshot of that moment and reflect – well, yes, – I, too, was crushing it!

It reminded me of a quote I read some time ago that still rolls around the back of my mind, especially when life gets hectic and I wonder if I can possibly do one more thing.

In his “That’s that” address to the graduating class of Morehead scholars in 1959, John Motley Morehead III, the original founder of the Morehead-Cain scholarships at UNC Chapel Hill, challenged the grads:

Stay with it, play the game, play it according to the rules. If you get hurt, don’t holler; if you lose, pay up. Nobody can win all the time. Play it hard, for any machine – electrical, human, or mechanical – shows its greatest efficiency when loaded closest to its capacity.

Don’t you just love that?

Perhaps that’s what my son and I experienced. Loaded to our capacity, we felt that exhausted-yet-blissful moment of crushing it.

Why not admit it? Why not celebrate it? I must admit that it felt good to say it.

Granted, who knows what tomorrow will bring. More rejections. More work. More busy-ness and exhaustion for sure. But in that moment, it felt great to simply acknowledge that well-earned success.

So how about you? Have you crushed it lately?

Think hard about when you were exhausted and if that exhaustion was worth it. I bet you were crushing it.

Then tell me about it. I’d love to know.

Managing Your Grief During the Holidays

Rebecca blogs over at From Where I Sit. This post was first published there earlier this month.  A few weeks...