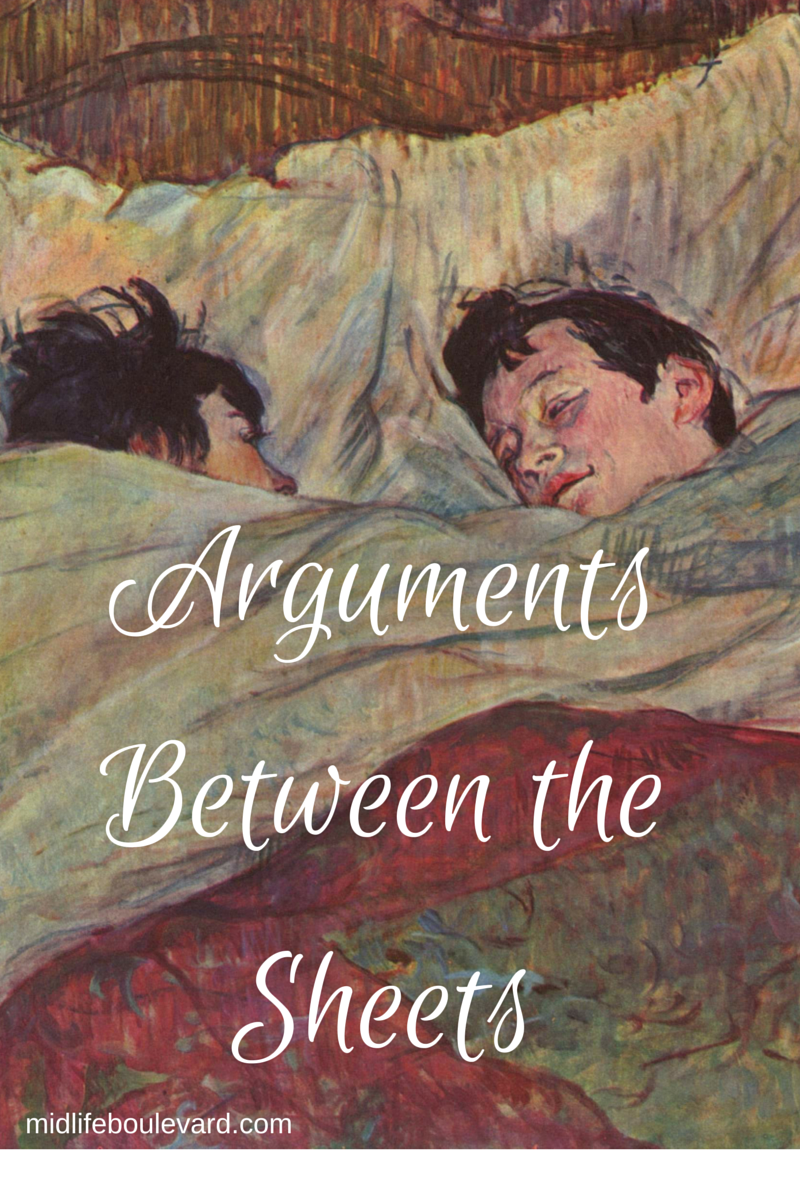 There seems to be quite a bit written lately regarding what couples argue about. One of my favorite writers, Crystal Ponti, penned a piece for the Huffington Post – 5 Crazy Things Most Couples Fight About. I especially liked Ponti’s take on how assumptions are often the root cause of most misunderstandings and arguments. Ponti is a bit of an expert in this arena: she contributed to the hilarious and recently released Clash of the Couples, which is filled with fabulous tales of coupledom squabbles.

It seems we couples sure do fight about some really stupid stuff.

Here’s the thing: if I’ve garnered any little bit of wisdom after nearly seventeen years of life with the Hubs (almost fourteen of them married), it’s that the solution to most issues is compromise and humor. If every disagreement has to escalate to full-blown winner/loser status, pretty soon you end up with two extremely exhausted people who have spent hours in circular arguments without a clue as to how the argument started in the first place. Small disagreements over common issues: dishes in the sink, toilet paper replacement, or making dinner can quickly get out of hand and devolve into giant storms over irresponsibility, self-worth, and lack of mutual appreciation and respect.

Truth be told, I did not always excel at compromise in my first marriage. This second time around, as I look back from up here in the middle-aged cheap seats, I realize that I’ve mellowed out somewhat. Is it age? Is it experience? Perhaps it’s the realization that these three little words can save you a lot of heartache: Lighten Up, Shirley.

Hubs and I have learned to agree to disagree in many areas: politics, religion, and NASCAR (I’ve tried, but I really don’t get NASCAR). However, there remains one area, one very important area, where we cannot come to consensus: the tucking of bed sheets.

Hubs is a tucker. I get it, he’s a military guy, and they have a long history of straight, stiff corners and bed sheets secured so tightly you can bounce a quarter off of them. But who sleeps that way?! I gotta have my sheets untucked, with room for one foot to stick out the side. This may be the oddest line in the sand for a couple, but there’s just no compromising on this one. My size 11’s are not going to be happy all bunched up at the end of the bed. Each night we do our little bed sheet dance – Hubs is tucked up, but not moi. Seems perfectly reasonable that this would be our standoff, don’t cha think?

Do you have one reoccurring argument with your significant other that may seem ridiculous, but makes perfect sense to you?

Ha!! Our recurring argument after 37 yrs is that Anne needs to calm down. I admit I am too busy in my body, mind and spirit. Oh hell! I think he's right!!

Me and my husband were so exhausted from arguing in our first marriages that we made a pact to agree to disagree after 5 minutes. After 9 years together it works pretty good .

Agree to disagree has indeed saved many a relationship. That, and two words: I'm sorry. Going on year #14 with the Hubs and we've both used those two words a lot more often then we used to.

Thankfully, we don't need to add the tucked feet to our list…and that's a good thing, since ours is so long! I hate waking up, walking into the kitchen, and seeing that there are dirty dishes. "Honey, didn't you say you were going to do the dishes?" And he'll answer yes, as usual. "But there's a sink full of them." "I said I'd do them, I just didn't say WHEN." I have patches of bald spots from pulling out my hair.

Oh, the dishes in the sink drives my bat crap crazy! I think there may be a legal defense - "the dirty dishes allowance" - for when spouses (usually women) freak out over this.

Yes, it's always the small stuff that really gets under my skin. Loved this article!

The small stuff sure can pile up!