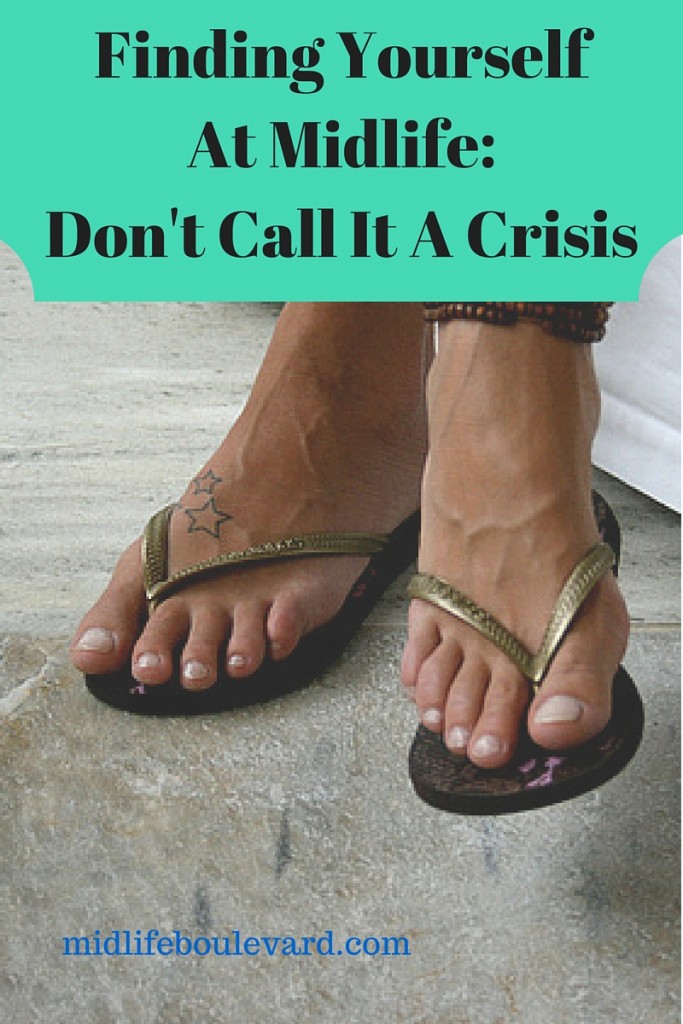 Candy can be found at Slightly Overcaffeinated sharing stories about her life as a Gen X mom trying to both, be a grown up and not mess up her kids.

Three months ago I got my first tattoo. A week ago my husband completed an Ironman competition. We are both 40 years old, but don’t call this our midlife crisis.

Twenty years ago I would have looked at people like us and rolled my eyes, made some sort of condescending remark, scoffed — anything to indicate “that will never be me.” Maybe something about old people being weird or asking where the sports car is. I was so sure of myself that I knew I would never need to have a midlife crisis. Obviously I knew this at age 20.

What I’ve learned in the last 20 years or so is that I am the same person I was then. I am older but not different. I am changed but only because I know better and wish to do better. What I viewed then as someone’s midlife crisis was actually a moment of their self-discovery. Another stop on the path. A glimpse of a blink in a journey of a literal lifetime.

At 40 I have the courage, the wisdom, and the resources to do things I’ve always wanted to do — like get a tattoo. My husband has always admired endurance athletes; at 40 he could afford to become one.

Midlife is fodder for much eye-rolling from the younger set and laughter from those of us who are in the throes of it. We are both justified in our responses; the younger set will be here someday and laugh at themselves for ever thinking that those “crazy” choices are any kind of “crisis.”

Because here’s the deal: by the time we are 40, 45, 50, we’ve dealt with a lot of crap. The crap doesn’t stop in midlife. In fact it’s often much more serious crap. Sometimes you have to be knee deep in crap before you can declare “ENOUGH WITH THE CRAP ALREADY” and those sweet little 20-year-olds barely have crap on the bottom of their shoes. And that’s just not enough crap to yell about.

So, my fellow mid-lifers, I encourage you to say enough with the crap already and get your tattoo or become an ironman or get that cool car or dye your hair purple or write a novel. It’s time.

It’s time to do the things you’ve always thought about doing. It’s time to give voice to the parts of you that have been shushed by crap. It’s time to not care if anyone judges you for having a midlife crisis. They can call it what they want because it’s your choice and you can do what you want.

So don’t call it a crisis; you’ve been here for years. Let the purple-haired, tatted, Ironman, novel-writing, sports-car-driving you OUT. The rest of us old, weird people have your back. And we aren’t laughing at you, we are laughing with you.

Amen! I feel the same way. Midlife has been a liberation. Can't wait to keep exploring!

Hello, I like your attitude and writing style. I have nine tats being fifty-seven. If you asked me what fifty-seven feels like I would reply my body, mind and heart love to mud-wrestle until one of us wins:)

Thank you! What a great answer -- the internal struggle isn't necessarily a bad thing, right? Sounds like your body, mind, and heart get along well even if they have different opinions!

I feel exactly the same and I'm 68! Got my first tattoo at age 64 and my next car is going to be a sports car. I plan on having this same attitude into my 80's. Life is too fun to miss out on a single moment!!

I love your attitude! I'm right there with you. This is also why I never lie about my age. ;)

What To Pack For Your Next Conference

If you're one of the many readers I'll be connecting with at the Bloggers At Midlife (BAM) Conference this week...