Jenny Kanevsky found paradise on a hill after a cross-country move. Is there anything more comforting than good neighbors? Read more from Jenny on her blog, In Other Words.

I moved a lot when I was a kid. Parents divorced, different neighborhoods, school changes, clumsy custody agreement, instability. When I was in 7th grade, my mom bought a house on a small one-block street. Tree-lined in that majestic, quiet way that many East Coast streets can be. Blanketed by a green ceiling, spectacular in Fall. It was rarely traveled unless it was your destination, and in winter, we’d get snowed in. One year, we were socked in for a week. With snow ploughs overworked across the city, our tiny street was not a blip on their radar. My mom finally Norma Rae’d a group of parents and kids to shovel us out. I’m sure my sister and I were driving her crazy. Schools had been closed for days. And days. It made the papers. 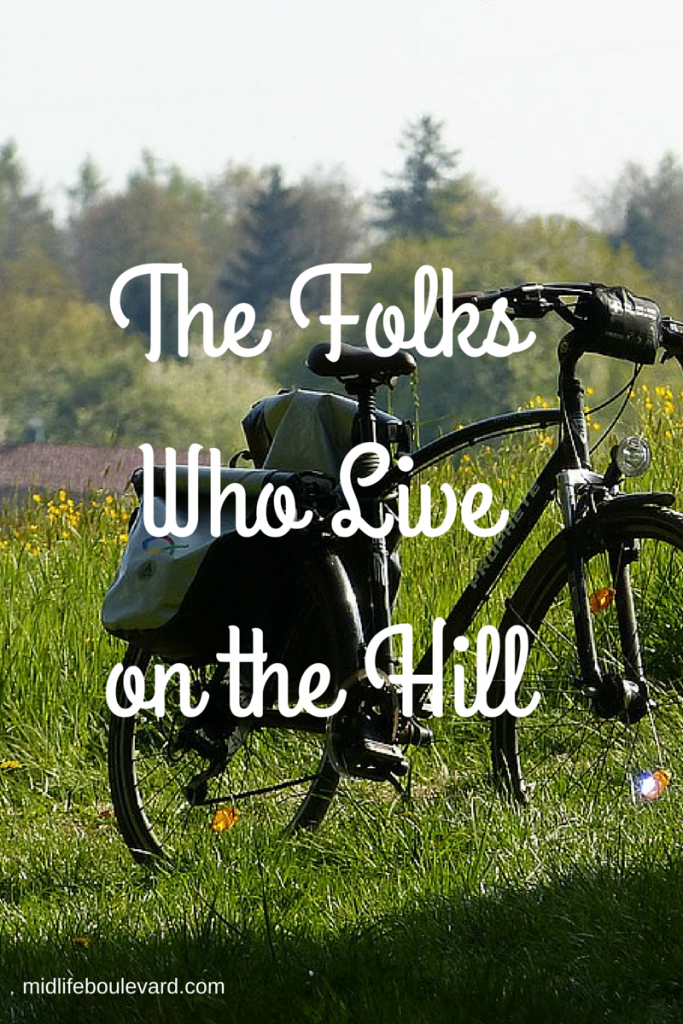 Kids ranged in age from baby to teen. I had twenty instant friends. Year round we’d find a stoop, chat, skateboard, play hopscotch, and build snowmen until way past dark. Crushes and high school and growing up happened. We graduated to dance parties. Our first party with slow dancing was on Valentine’s Day. Earth, Wind & Fire on the turntable, and we were abuzz with adolescence. It was innocent and wonderful and lasting. These people are my friends still, decades later, on Facebook, over email, if we are in town we visit. We built a community for life. We are friends for life.

In 2011, my husband and I moved from Seattle to Austin. Weather was a reason, but cost of living, better public schools, and a better, safer, quieter neighborhood were also high on the list. The first thing we told our realtor was “No busy streets.”

It took nine months of living in a tiny 1,000 square foot apartment, waiting out a sluggish Seattle real estate market and fighting an exploding Austin housing boom. That first year was one of the hardest on our family, our marriage, and each other individually. We knew a cross-country move would be a strain, but, knowing it and living it are two different things.

And then, home we finally found. We moved onto a wide, quiet street filled with children. A single-block destination that isn’t even called a “Street,” it’s a “Hill.” When I talk to customer service people on the phone, they are puzzled, “What’s that, how do you spell it?” “It’s H-I-L-L. Abbreviated HL,” I say. “Oh, that’s a new one.” No, I think it’s an old one. It’s our little slice of small town America. In the city. It’s deer every morning on the way to school, waving to others as you drive by, but with culture galore, music festivals, hiking trails, restaurants, clubs, major university campuses and progressive politics.

Our current home sold within four hours of going on market. We won over other bids because of my children, their love of dogs, and my letter to the owner. When we came to preview, he was home. An August afternoon hovering at the 107 degree mark. He took his dogs out while we looked at the house. My husband and I took in the wall of windows, the glistening pool, the giant great room, the atrium (in which my older son had already positioned himself and declared, “I’ll be in here, reading every day. Maybe we can get a lizard. A lizard would be great in here.”) My younger son Tigger-bounced through the house. “I want this room,” he declared. “Let’s get this house, Mom.” In the letter, I told the owner how much our family felt at home, immediately, that we would create a space filled with love, pool parties, BBQs. I told him about our sons, their new schools, the incredible positive changes we’d had since moving to Austin. The missing puzzle piece was a home. Sold.

Our first day, waiting for an appliance delivery, I saw an open garage across the street and two boys about my sons’ ages. “You guys want to say ‘hi’?” I walked them over. “Mom! They have a gecko.” My older son was immediately glued to the terrarium’s glass. When the delivery truck pulled up, I gathered them up. “Oh, they can stay,” my new neighbor said, “it’s fine.” And my instinct said, yup, it’s fine. They were there for hours.

We have lived here two years and I have never been so happy, never felt such community. The other night, the entire street was full of neighbors ranging from ages three to twelve to fifty. Adults talking, laughing, sharing a beer, easily moving in and out of conversations. Kids playing, older ones with the littles, teaching them to ride their scooters, stick out their tongues at Dad, safe and comfortable with their “brothers and sisters.” Bicycles weaved in and out of the adults. My younger son carefully crossed the street with two of the three year olds, sat on our front swing and rocked. We could hear “Swing, swing, swing,” giggle giggle, “Swing, swing, swing.” Repeat. Every so often we’d look up to make sure they were OK.

Our doorbell will ring and it will be someone to swim or a little friend with her mom “I want to play animals. Can we come over?” And my nine year old will play with his three year old “sister” while I get to talk to her mom, my friend. I love that she’s three and walks around our house as if it were her own. “Hi, Miss Jenny,” she’ll say to me. “Where are kitty cats?” “Oh they’re sleeping.” “Kitty cats sleeping. I see them tomorrow. I come back tomorrow.” “OK”, I say, and I mean it. You come back tomorrow, and the next day, and the next.

It’s like that. All the time. And, we love it; we hit the jackpot. We all know how lucky we are. We have a community of our own, a village of neighbors. Friends for life. And a lizard. He lives in the atrium.

I am so envious. We have lived in San Diego and I long for the day we have a neighborhood where Haydan can frolic outdoors with friends and play hide & seek and ride bikes. For now, she stares out the window at all the 90-year-old senior citizens walking their dogs and we trim the rose garden together. She is turning into an old soul overnight due to our senior citizen community. The upside, everyone loves her and stops to say hello, however, the no children in the neighborhood thing really makes me sad. I grew up with that and I think that is such an important part of childhood. I'd also love to have a neighbor that I could sit outside and have a glass of sangria with or a little evening stroll. One day, one day!

I love this. It's amazing how similar our moving story is. I sure loved Seattle but I never knew life could be like what we have now in Austin. Kids riding bikes to school, wandering house to house playing after school and spontaneous driveway parties at least once a week. You captured it perfectly.

Ha, Sara, yay for lizards. I was pretty anti-lizard but my youngest wanted a pet of his own, he's 9 and it's a great pet for a kid that age, he can really do a lot of the caretaking and he has some responsibility. I'm warming to the little sucker too.

Ok, now I want to be your neighbor! It is SO important. Our last home was strewn with less than desirable neighbors...the hubbs and myself are currently on the house hunt....since October ugh! Oh, and we are in the process of buying a lizard.

When our kids were young, we also had some amazing neighbors and friends, and I have the warmest memories of those days. We have all moved now, and some I am still in contact with, but I know how special it is to have that community for yourself, your husband, and the kiddos.