Debbie Pfitzenmaier and her son were pleasantly surprised to find college connections at a math meeting. Who’d of thunk it? Read more from Debbie on her blog, Freeze Dried Hippie.

Spring semester – junior year. BG (my son) and I are deep in the forest. Like Hansel and Gretel, we’ve been thrown out there, not of our own free will, but of a clock that is ticking closer and ever closer to graduation. I have a few bread crumbs I’ve dropped along the way – little reminders that we will find our way home and he will find his way to the right college.

I’m known for my resourcefulness – I inherited that skill from my mom. I’m an information-seeking junkie. If you tell me you have a kid who is a senior or one in college, my next question will wrap around the college search and application process. I’ve learned a lot this way. And it still feels completely overwhelming. 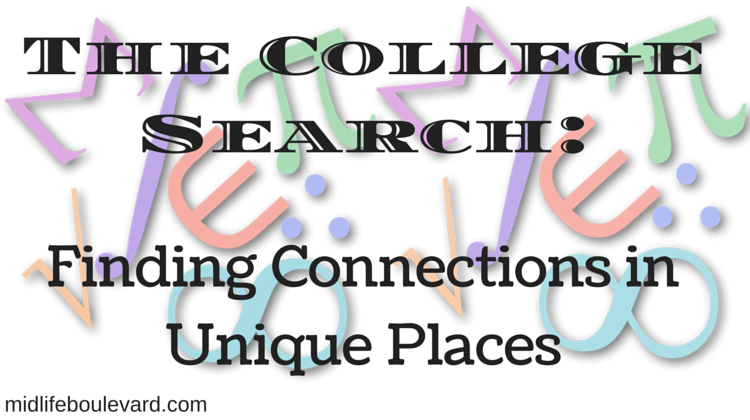 Still, we do the things we have to do. Campus visits are long and packed with a lot of irrelevant information and a few useful tidbits. We’ve been to several college fairs, but often the people behind the brochures have limited – if any – information about specific degree plans. I’ve filled two trash bags with more than our fair share of college mail – he gets between 15 and 20 postcards, brochures and letters a week. Maybe college wouldn’t be so expensive if they’d stop sending so much darned mail. I’m pretty sure they single-handedly keep the post office in business.

It’s all been of limited help. Then, I found something brilliantly useful, completely by accident.

A friend, knowing BG’s interest in math, told us about the 2015 Joint Mathematics Meeting – the largest math meeting in the world – being held at the convention center in our hometown. She thought he’d enjoy their high school competition, Who Wants To Be A Mathematician?

Sounded like fun, so, why not? A couple of missed school days wouldn’t hurt him, especially if he had the opportunity to be exposed to higher level math. And student fees at such conferences tend to be inexpensive – between $10 and $25.

The first day of the meeting we mostly hung around the exhibit hall where he had two origami designs on exhibit (bonus to mom for searching the conference site and finding out they had a juried art exhibit).  And as I looked at people’s name tags, it hit me: there were thousands of college professors and students.

We were standing in the middle of a ginormous, exceptionally relevant college fair filled with people who could actually answer BG’s questions about curriculum, research and requirements.

If you have a high schooler, stop whatever you are doing right now and go find a conference to go to. Okay, not really…but it was that amazing.

BC (Before Conference): BG had a very limited concept of the colleges he might be interested in.

AM (After Meetings): We now have a game plan of about five solid college candidates for BG to research and visit, including one we had not heard of prior to the meeting.

Here’s the thing: when you haven’t been through something before, you don’t really know what questions to ask. The more you research, the more information you’re fed that leads you to know what questions you need to ask so you can make a smarter decision.

For example: BG is highly focused on STEM classes with limited interest in the liberal arts. In his mind, the fewer liberal arts classes he has to take, the better. Until we visited with a professor from MIT. Who told him that while he still needed to take liberal arts classes at MIT, he would be taking them with a bunch of other students who are also highly focused on STEM (science, technology, engineering and math) and not particularly fond of liberal arts. Which brought a whole new element into that picture.

Parking these tips for the next conference and maybe, dear reader, you will find them helpful, as well….

People – even though they were busy running from talk to talk – were very open to spending a few brief moments in conversation with my son. I suppose they have a vested interest in bringing new talent into their field.

We already have the upcoming physics conference on our calendar. Can’t wait to see who we will meet there and what we will get to play with in the exhibit hall.

And in the back of my mind, I feel like we’ve outwitted the witch – just a little.

Debi Pfitzenmaier is a writer, public relations professional and mom to two amazing teenagers. A frequent lecturer at workshops, lunches and conferences in the areas of social media, entrepreneurship, email marketing and media relations, she is most proud of creating of the San Antonio Youth Code Jam, a program to introduce young kids to programming. She received a Texas Social Media Award and was named San Antonio’s Best Blogger by San Antonio Magazine. Fun facts: she was asked to star in a Chinese movie and once carried Elizabeth Dole’s shoes in a paper bag.