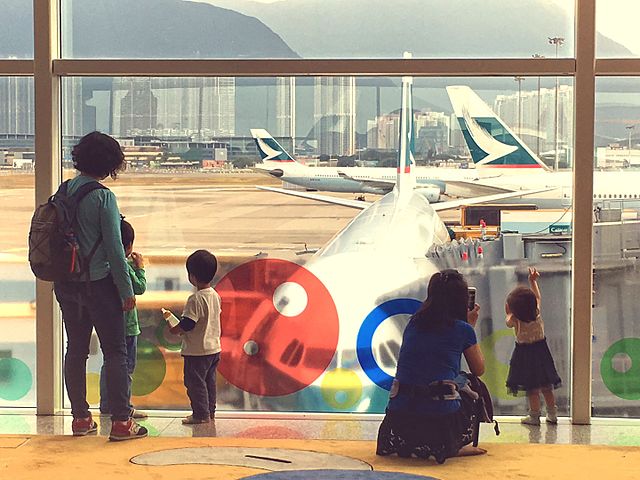 The subject of children on airplanes is sure to elicit conflicting opinions. Every so often, one airline or another threatens to ban children from certain flights or from being seated in certain areas of the plane.

Do you board an airplane hoping no babies or small children will be seated near you?

I feel really badly I do this. That used to be me with the diaper bag and a cute little blonde toddler on my hip.

My worst trip as the parent of children on an airplane happened some 28 years ago on a flight from Philadelphia to Pittsburgh to visit my in laws. We must have bought tickets at the last minute because my seat was in the last row, between two businessmen, with an almost two year old boy on my lap. They weren’t smiling. I tried not to let any cheerio dust or apple juice get on them. I don’t recall any smelly or leaky diaper scenario, but maybe I’m just repressing the memory.

Mercifully, the flight was only an hour and the kid (remember, we’re talking about an almost two year old here) managed to keep it together.

Newsflash:  You could have saved the money you spent on the survey.  I’m willing to go out on a limb and guesstimate that 75% of all airplane passengers in every class have at some time been irritated by a child on an airplane (sometimes, their own offspring!).

I’ll go even further. On every flight, in every class, someone is being irritated by another passenger — and many of the irritants are well over the age of twelve.

BEYOND CHILDREN ON AIRPLANES

If you fly with any regularity (once a year is sufficient), you will be familiar with the following scenarios:

Rather than penalize fliers with children, I’m thinking the answer might be drugs. No, not for the babies – for the grown ups!

TIP FOR TAKING CHILDREN ON AIRPLANES

From time to time, I’ve read about other airlines, in addition to Malaysia Airlines, contemplating child restricting policies, but the move is controversial. If this is an important issue for you, it’s prudent to check an airline’s policy before plunking down your money for a non-refundable ticket.

Don't forget trains. Parents feel much freer to allow their small children to eat, talk at a higher decibel, whine more and move about on trains as they aren't as confined. And although Amtrak dims the lights at night (hint, hint kids...and parents), it seems quiet time and courtesy for the other riders has become non-existent.

I love the Quiet Car, if I can get a seat there. It's so much more peaceful in general.

You get to your mom’s house after her latest doctor appointment – which in itself has you concerned for her...