The Winter Solstice is a date that has been celebrated in cultures around the world for thousands of years. Kathy Gottberg encourages us to continue this tradition to remind us of the gifts of our planet. Read more from Kathy on her blog, Smart Living 365. 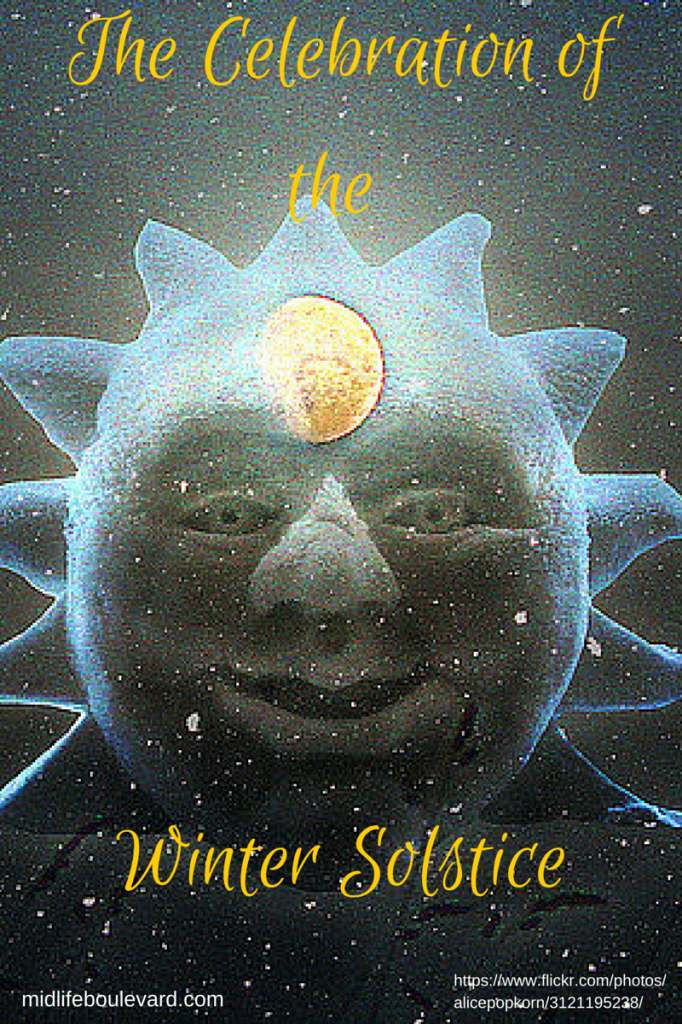 This year the Winter Solstice falls on Sunday, December 21st, and Thom and I are invited to a celebration. I’m not sure what to expect but we’ve been asked to bring a vegetarian dish for the potluck and I’m guessing there will be candles involved.  At first glance the experience might seem strange, but maybe it shouldn’t be. In a time when many of us excessively celebrate a old man in a red suit who flies through the air on a sled pulled by magical reindeers, maybe the solstice deserves more attention than we normally offer. In fact, when I thought about it, I came up with two good reasons all of us might consider celebrating it on a regular basis.

First and foremost I think celebrating the Winter Solstice helps us get in touch with nature and the planet that we all need in order to exist in human form—and that certainly deserves our delight and honor. Remember, the winter solstice marks the shortest day and longest night of the entire year.  Exactly six months later, the summer solstice will mark the longest day and shortest night of the year, and back and forth it goes. While it might sound routine—this occurence is extremely extraordinary!

Just consider that unless the rotation of our planet happens just like the seamless clockwork that it does, you and I would never know or be able to celebrate the seasons that happen each and ever year. Weather patterns and food production would be disrupted. Life as we know it would change. Over and over this aspect to our lives is just one of the automatic processes of our environment that we take for granted and assume will never alter. Like the ebbing of the tide in the oceans, and the elements of the earth, our bodies and psyches are intimately entwined in nature in thousands of ways. But like the beating of our own heart, most of us have forgotten the miracle that we live with day-in and day-out.

Unfortunately not only do most of us take our connection to the planet and nature for granted, it’s getting worse. According to veteran wildlife presenter, Sir David Attenborough, our continued disassociation with the planet over the last 60 years is a big cause of the current planetary crisis. He reports that rapid urbanization has resulted in over 50% of us now live in cities.  Some children have never seen a live wild animal (let alone a domesticated one that they eat), clear skies, undeveloped mountains, or vegetables growing in a garden. With so many people out of touch with the seasons, with animals, and nature herself, it’s easy to imagine a future where we live in enclosed biospheres that resemble zoos (or jails). But instead of us placing the animals inside, we’ll be doing it to our children and grandchildren just to stay alive.

Of course it will require more than merely celebrating the Winter Solstice to return us to a place where we stay more connected to Mother Earth. But is it such a bad idea? If every family around the world took nothing more than a few minutes to stop and point out to their children the incredible miracle that life on this planet offers each of us every solstice, it could help in ways unimaginable.

The second reason I think it would be good to celebrate the Solstice is because it connects us to the past in ways that could possibly educate, inform and benefit us into the future. Think about it—according to some estimates it is believed that the Winter Solstice in the Northern Hemisphere has been celebrated for at least 6,000 years. That’s because although our ancient ancestors knew little of the scientific reasons for the change of seasons, they were intimately aware that daylight was growing shorter and temperatures were dropping. They didn’t need to look at a calendar to know that animals were going into hibernation, fruit or vegetables must be harvested and stored or that it was time to stock up on some candles. But then, just when it seemed the sun was destined to wither away completely, a reversal occurred and the light returned.

Attempting to make sense of the mystery of it all, our ancestors imagined all sorts of spiritual and religious beliefs to explain the return of light to themselves and their families. Anyone who had lived for a few years probably started recognizing the pattern and began realizing that perhaps there were things that could be done to ensure that the event not only occurred on schedule, but did it in a way that benefited the family. Religious rituals were introduced, celebrations happened, and before long the Winter Solstice celebration was an annual occurrence.

Of course, it wasn’t always called a Winter Solstice celebration. The religions and spiritual beliefs that sprung out mankind’s desire to make sense of the universe, absorbed the experience of the shortest day into various traditions and rituals that suited that particular group. The ancient Romans, who believed their most powerful God to be Saturn (the Sun God) celebrated Saturnalia on December 17th and partied for seven days. While it eventually evolved into a riotous experience of a holiday, it started out with feasting, gathering with friends and family, and gift giving.

Going further, Hanukkah from the Jewish tradition is connected to the middle of winter and is a celebration of light with rituals of gift-giving, indulgent food, and gathering with family and friends. The Dongzhi Festival in China and Japan is a winter solstice celebration with ties to short days and long nights, and roots traced back to the yin and yang philosophy of balance. Scandinavian counties celebrate St. Lucy’s Day where a young woman wears a crown of candles and hands out treats to children.  Another winter festival tied to the solstice in Northern European countries was named Yuletide where the heat and light from a special log was said to represent the properties of the returning sun. There’s more. For at least 6,000 years most people on the planet have celebrated the season in a way that gave their lives meaning, purpose and a sense of understanding. There are (and have been) many more traditions out there that I don’t have time to cover. But this in no way detracts from those who choose to celebrate Christmas in whatever fashion. Instead it provides even greater depth and connection when understood within the concept of wholeness.

What I believe might be important is to acknowledge is that the Winter Solstice has always been a breeding ground of ritual, celebration and connection for all human beings for thousands of years. If we are paying attention, the Winter Solstice can remind us of the mystery, wonder and gift of being alive.  As long as we are not overly attached to believing that our ritual and celebration is superior and exclusive, we can appreciate that all of us have a strong desire to connect to a source of meaning and purpose. Best of all, the shear wonder of the experience can also help us to be humbled and awed by a force so much greater than our limited and tiny understanding.

Another thing I especially like about the Winter Solstice is that it belongs to every single one of us equally. No matter where you live, no matter what your race or background, no matter your religion, political party, your sex, your age or whether you are rich or poor—this important planetary gift is ours to appreciate and enjoy. So regardless of whether you plan anything special this Saturday evening, I urge you to consider that this event is indeed special and deserves recognition far beyond what we usually take for granted—even if all you do is light a candle and remember.

Kathy... Great article, I really never looked at it that way but Tapio's from Finland and they celebrate both the winter Solstice as well as the summer Solstice. I have been there both times of the year and got to enjoy something special each time. And then there is my ex-husband who was born on December 21st and he was always a pretty special person in his own way, which didn't necessarily coincide with the rest of the world... Very interesting piece, thank you for writing it...hope you and Thom have great holidays and enjoy your special celebration of the Solstice.

Hi Pandra! Thanks for coming by and reading this post. And lucky you for being able to get to celebrate both the Winter Solstice and the Summer Solstice in a country that recognizes the holiday in a bigger way. I can't help but believe it would help us all be more in tune with nature and it's effects on our lives. And being born on the 21st would help to make someone special for sure (even it was just to have a great celebration every year!) Thanks again for coming by and I hope you and Tapio too have a Happy Winter Solstice, a Merry Christmas and a very happy new year! ~Kathy

Wow! What wonderful research you've done in writing this! Something so naturally occurring and yet so full of important meanings for all life. Thank you for this great essay that deserves to be shared. I've started practicing qugong and love all the references to nature....this makes it even more fun and inspiring!

Hi Joan....glad you liked the article. Because I love to celebrate and see the good everywhere I can find it, I find it so helpful to remember all the different ways people can come together around uplifting values and ideas. AND as you say, far too often we forget about our planet and how connected we are! Gugong is an EXCELLENT practice for getting in touch with the flow of energy through all things. Good for you for making it a regular part of your life. ~Kathy

Thanks Midlife Blvd. for publishing this article of mine. I hope that more people read it and discover how the Winter Solstice is such a wonderful holiday and worthy of celebration.