Latkes are as essential to Hanukkah as candy canes are to Christmas. Sandra Sallin shares her favorite latke recipe with us – and our mouths are watering just looking at the photos! Read more from Sandra on her blog, Apart From My Art. 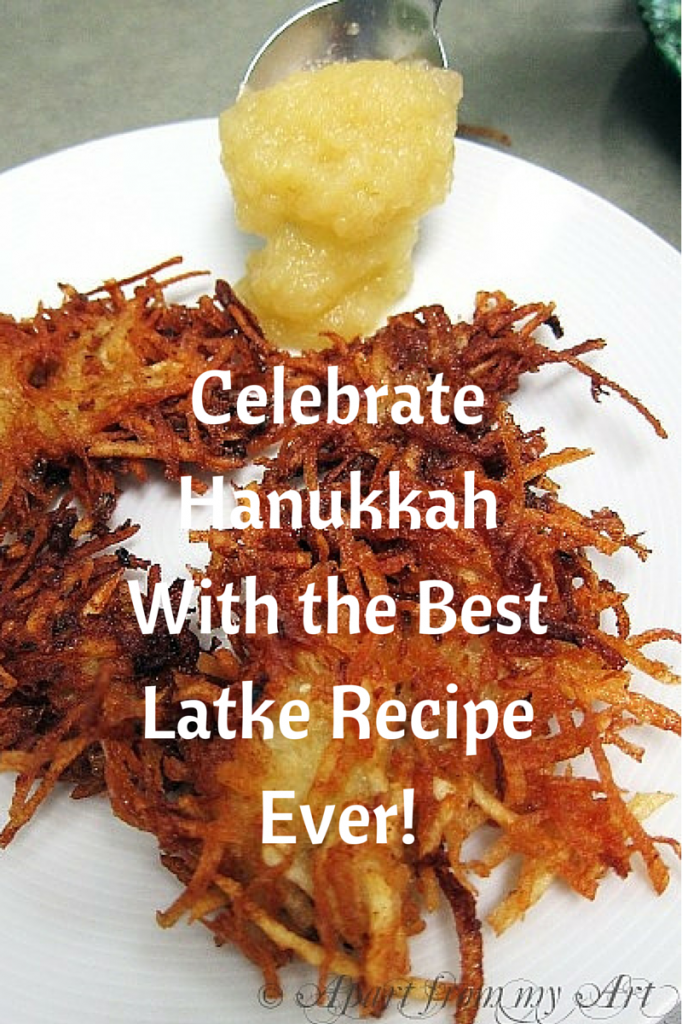 Look no further. Don’t go to Martha’s site, not to Gourmet, not anywhere. Eureka, you’ve found it!  The “Golden Mean” of  potato latke perfection. Perchance I exaggerate?Non! I tell you. This is it. The vrais latke!

So let’s get started.

How do you prefer to peel your potatoes? Knife or peeler? I prefer the OXO Swivel Peeler.

After peeling the potatoes, place them in a bowl of water so they will not discolor.

Then grate the potatoes by hand, and possibly lose the tip of a finger in the process…

…or use the grater attachment to the Cuisinart. I prefer that.

Slice the potatoes into chunks, place them into the Cuisinart and begin grating.

After they’re grated,  immediately place them in a large bowl of water.

Then drain the water.

This is really important: again place the grated potatoes into a bowl and fill with water. Repeat draining and soaking until the water is clear and there are no pinky or brownie areas of water. Just keep on changing water,  letting the shreds soak and drain again. You’re getting rid of all of the starch so that the pancakes will be very crisp. Don’t skip this step! You may have to soak and drain three or four or more times. Just do it.

Now take the onions, chop them roughly, and place them into the Cuisinart. This is the only time I chop onions in the Cuisinart. They get too watery for other recipes, but it works for this one. Just don’t chop them to mush. You want small pieces, not mush.

Then, beat two eggs together. Add 1/2 cup of flour sifted with 1/2 teaspoon of baking soda and 1 tablespoon of Kosher Salt. Add pepper to taste. I’m not big on pepper, but maybe you are.  Now, drain those potatoes really well, squeezing  as much water out of them as possible.  Really get rid of that water! Now, add the egg, flour, salt and pepper mixture to the potatoes and you’re ready to go.

Pour about a 1/4  inch of canola oil into a heavy skillet. I mean heavy. I mean iron. Then, take a wooden spoon, place the handle top into the oil and wait for the oil to bubble around the handle. This tells you the oil is the right temperature for frying. Aha, it is a trick that I learned in Italy at a cooking class with Guiliano Bugialli! Trust me, it works.

Now, the fun part. Add the potatoes, 1 tablespoon at a time, or as large as you like them, and you’re good to go.

When they’re brown on one side, turn them over.

Drain the pancakes on paper towels and they’re ready to eat.

My husband ate one of these and proclaimed it was “a religious experience!” So enjoy!

Some people serve these with sour cream and applesauce. I eat them plain, just as I do  caviar. I want nothing to detract from the divine taste.

Now, since you’ve stuck with me so far let me give you a little treat.

A few years ago, we shot a video about making potato pancakes as an audition for a Food Channel competition.  We never submitted it though because we discovered that the network wanted to own all rights in perpetuity. But, trust me, this is the way potato pancakes (or latkes) should be made!

This recipe is an adaptation of Lora Brody’s recipe for potato latkes from her book “Cooking With Memories.”

Here are the ingredients:

Sandra Sallin is a professional artist (www.sandrasallin.com) who became a 72-year-old blogger when she decided to write about her life apart from her art (www.apartfrommyart.com). She’s been kissed by wolves in the Sawtooth Mountains, and she has way too many lipsticks. She will be writing about everything from her mother’s escape from Czarist Russia to shaking Steve Job’s hand at Apple. She is not your typical septuagenarian. In 2013, she was honored as one of the Voices of the Year by BlogHer.com.

Sandra Sallin is a professional artist (www.sandrasallin.com) who became a 72-year-old blogger when she decided to write about her life apart from her art (www.apartfrommyart.com). She’s been kissed by wolves in the Sawtooth Mountains, and she has way too many lipsticks. She will be writing about everything from her mother’s escape from Czarist Russia to shaking Steve Job’s hand at Apple. She is not your typical septuagenarian. In 2013, she was honored as one of the Voices of the Year by BlogHer.com.

These look awesome!! I love potato latkes but never made decent ones. Now I know how to make fabulous ones!! Thanks Sandra. I never knew about the rinsing part.

Do you deliver? Love this - are you going to be "aired?"

We never sebmitted it. Decided against it. But they're still fabulous!

This is very similar to the recipe I use but I use matzo meal instead of flour. I do love a crispy, lacy latke!! (Or four)

Nancy I'm sure ( actually I don't have any idea) that they will be great. It's removing the starch that makes them so lacy and the seasoning is just perfect!

I'm not Jewish, but I love Jewish food, especially latkes. (Oh oy! I love ALL food.) must try this recipe! And by the way, don't you think that latkes look like hashtag potatoes? #latkesarehashtagpotatoes

You're right Marci. I should translate and say Potato Pancakes. #latkesarepotatos But how ever your translate it they are the best!