I have a day job. Yep, as much as I love writing, I also have to pay the bills. I’m fortunate in that my current business allows me great flexibility as well as opportunities to meet and work with some truly interesting people. 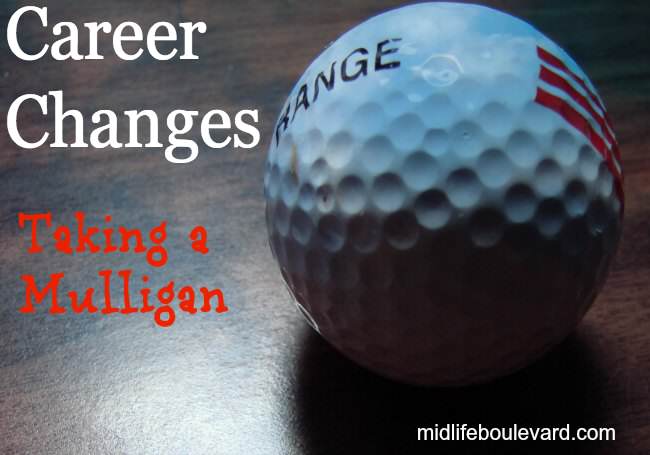 Working as a consultant sometimes also brings its share of a few surprises. Take for example this recent exchange with a potential client – let’s call him “Harry.” As Harry reviewed my resume he looked up from the paperwork and said;

“Well, it looks like you’ve taken a few mulligans during your career.”

A Mulligan, in a game, happens when a player gets a second chance to perform a certain move or action; usually due to lack of skill or bitter luck. A “Do-Over”. Like getting an “Extra Play” in pinball due to sinking the ball before obtaining an arbitrary amount of points.

It usually takes a lot to fluster me. However, Harry’s comment caught me quite off-guard. I’ve certainly changed lanes a few times in my personal life (“A Bend in the Road”), but I’ve always thought of my professional career as being pretty slow and steady. I’ve stayed with most employers – state and federal government as well as non-profits – for at least six years or more. Being that I’ve been working for over 25 years, even by “Florida Girl Math Skills” standards I’ve changed agencies a total of four times. Is this a lot?

I began to wonder if this query by Harry (who appeared to be in his mid-fifties) might be based upon generational biases and attitudes. A quick search revealed an interesting article- “Is Loyalty Dead” – published on the Psychology Today blog site “Wired For Success” – which notes some key differences between baby boomers and millennials/younger workers when it comes to loyalty. In particular, I found this of keen interest:

In the work world where employees were lifetime workers, and employers took care of them, that concept of loyalty made sense. However, today’s work world is vastly different: Lifetime employment doesn’t exist, and employers, including governments, have reneged on their promises. The traditional concept of loyalty implies allegiance to someone or something even if it contradicts self-interests. In the workplace setting, this concept has been viewed as an employer’s expectation that an employee would eventually be rewarded for this kind of allegiance.

No wonder baby boomers (I am, by the way, a boomer having just snuck into this demographic in 1963, with the official cut-off seeming to be 1964) are perhaps a bit peeved: the world changed the working rules in mid-stream. Where loyalty was once rewarded, today it is expected that most young workers will change jobs every two years (American Bureau of Labor Statistics, 2010). Given Harry’s age, he might readily believe that someone my age, should be a more loyal employee.

I also pondered if Harry had preconceived notions regarding my status as a working boomer female. Did he perceive four employer changes over twenty-five years to be excessive because women should be loyal to a fault? Would a man have been called out for changing jobs just four times over a twenty-five year career?

I’ve recently been reading Sheryl Sandberg’s wonderful book “Lean In”  that describes, in exceptional detail, women in the workforce. My favorite chapter to date –“It’s a Jungle Gym, Not a Ladder” – explains how “ladders” don’t work for most working women because there is only one way up and one way down. Women can benefit greatly from an alternative “jungle gym” approach where there are many ways to get to the top. This jungle gym model can be especially useful for women in that we often stop, start and re-start our careers as we manage families and other obligations. I’m pretty sure that Harry is more of a ladder kind of guy. Too bad for Harry: playing on a jungle gym, with all its twists and turns, sure is a lot more fun than a boring old ladder – don’t you agree?

What has been your approach to your career path? Have you been exceedingly loyal, or have you often jumped ship?

As for me, sitting here in the middle-aged cheap seats, I have few regrets when it comes to my career. I do know, from personal experiences, that taking a mulligan is challenging. A do-over requires you to conquer self-doubt, something Sandberg refers to as the “imposter syndrome” by which you feel like a fraud and you fear that if you take a mulligan everyone will find out you’re a fraud. This syndrome has plagued me for years, but I am buoyed by the knowledge that those four employer changes all yielded great results. I have faith that my career journey will continue to evolve as I happily swing from the monkey bars.

Read more from Kimba Dalferes on her blog, The Middle-Aged Cheap Seats

Kimba Dalferes is a native Floridian, but currently pretends to be a Virginian. She is an accomplished king salmon slayer, estate sale junkie, and sometimes writes books. She is currently working on the sequel to her first book “I Was In Love With a Short Man Once.” This next book, “Magic Fishing Panties” will be out in 2015. She divides her time between Fairfax and Smith Mountain Lake, Virginia with husband Greg and occasionally her son Jimmy; when he is home from college. She also hangs out in The Middle-Aged Cheap Seats .

Holiday Gift Guide for Women Over 50 This is the 2013 holiday gift guide you’ve been waiting for. Peruse at...