It hath come to pass that I am madeth aware, yet again, of a marital sex epiphany. Henry will, from time to ignominious time, refer to me as, and I quote, “SWEETUMS.”

Sweetums bakes things. She crochets tea cozies. Cats adorn her. Her vagina resembles the dry, sun-baked, inhospitable terrain that greeted Clint Eastwood in The Good, The Bad and The Ugly. 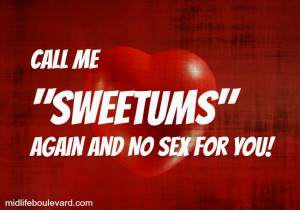 “If you call me Sweetums again,” I said to Henry, as I drained the spaghetti in the kitchen sink, “or refer to Dinner as Supper like John Boy Walton with that huge mole on his face, we will never have sex again.”

What I realized, in that moment, is that domestic life is deeply unsexy.

By day, and now that our kids are older, much later into the night, we are asexual Disney parent-bots. We say things to them like, “Don’t forget to brush your choppers!” or, “You seem a little tye tye (tired),” or “Can I get some snuggle buggles over here?”

There is no better father than Henry. When the girls kiss him goodnight he does a happy, little gnome dance, which literally sends me into early onset menopause.

The other night Henry and I managed to get in bed together by 10p.m. which meant we might actually be awake long enough to have sex. But Sweetums and Supper danced like little cockblocking gnomes in my head.

I suppose it’s possible I’d whipped up a cockblocking souffle of my own; lifting up my shirt to reveal nude Spanx, flossing my teeth with the bathroom door open.

So we lay there in the dark in our pajamas, sleep beckoning like the Sirens, hoping to crash our marital vessel upon the rocks.

It dawned on me that I understood why people have affairs. Couples become so inured in their domestic personas that they see one another quite differently than from BK – before kids.

Suddenly you’re calling each other Mother and Father and anyone outside of the domestic realm seems more sexy and appealing than your spouse. Fortunately, Henry and I work from home so there’s scant temptation.

Still, it’s good to be aware of the fact that domesticity is doing it’s very best to kill the married couple’s sexual fire, aka fuego sexual in Spanish and feu sexuel in the language of Love.

To recognize that, no matter who you marry and raise children with, you’re going to see them in red long johns on Christmas morning because it’s a humorous nod to Santa and it won’t be hot.

The trick, I’m realizing, is learning to transition from parents to lovers. Let’s call that transition the DMZ (De-maritalized Zone). Two things to do in the DMZ to bring sexy back:

Not all journeys are fun, but there are many one cannot avoid. Especially at midlife. This year, in June 2013,...